While the United States Postal Service is in decline (considerably because of the Internet), there was once a time when it was the most important service in the country. This building represents that age in the city like no other…in the form of a giant Monolithic Art Deco Riverfront Fortress of Mail Distribution of Doom and Associated Apocalypses.

It all started with a federal report in 1922 about the total inadequacy of the then-current Philadelphia Post Office, which was located in a beautiful lost Victorian mega-castle at 9th and Chestnut. Though that building was GIGANTIC and took 11 years to build, it could just not handle the volume of post that was passing through. Offices were being moved into cellars and attics… interior alterations of the building to create more space (like filling in what was once an open mezzanine) didn’t help. 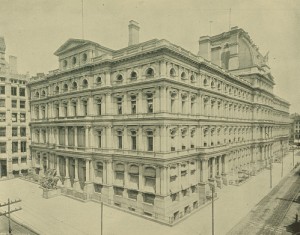 Officials decided that a new “factory type” building in a more centralized location, accessible to roads and rail, would solve the problem. The location of this new Postal Superstructure was the source of a years-long debate. The first spot thought to be most adequate was the 1600 and 1700 blocks of Market Street. The need was so great that two city blocks would be required. The second idea was to split the duties of the grand Post Office into two separate (but still huge) offices, one in North Philly, one in West.

Finally, once a new “passenger terminal” was planned for 30th Street on the Schuylkill River, it became obvious where the new Postal Juggernaut should go. The architectural firm of Rankin and Kellogg was commissioned for the design, and former Senator George Wharton Pepper, a big Postal Service supporter, forced his son’s firm, Tilden, Register, and Pepper, into the action, to assist. They came up with a design for a five-story giga-factory for the distribution of mail by every kind of means. Construction began in 1931 and was not complete until 1935.

For all you Transit Oriented Development geeks out there, this building  was accessible by road, rail, river, and SKY. That’s right, a helipad for “autogiros” was installed on the roof that would be able to carry pieces of airmail six times a day from the Philadelphia Municipal Airport and the Camden General Post Office. Though this service only lasted a year–July 6, 1939 to July 6, 1940–it was a glimpse into the future. This building presented other glimpses into future technology: robot “selectoveyers” automatically distributed trays of mail, a heating system warmed the roof to avoid snow and ice, and electric dryers dried mail carrier’s rain-soaked clothes. 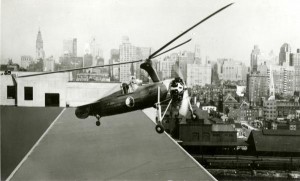 The magnificent facade of the 4.5 million dollar structure was clad with Indiana limestone and Deer Island granite. The window frames were stainless steel and the doors bronze. The interior sported rotundas with blue and green mosaic-tiled domes, with public corridors of marble and nickeled silver. Over one million pieces of mail would get distributed through this beast on a daily basis, most of it moving through the loading area that was capable of docking 100 trucks at a time.

Less than three decades later, postal volume had grown so much that 100 trucks at a time were no long cutting the mustard. In 1961, construction began on the Philadelphia Post Office Truck Terminal Annex. Though meant to be a temporary structure, it managed to stick around for four-and-a-half decades, continuously mangled by renovations and alterations, including the Railway Express Annex and a vehicle maintenance facility. Then, after four full decades of complaints, an 11.7 acre surface parking lot was stuck on the property, stinkifying the area for a generation. 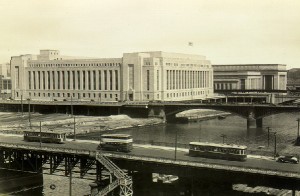 The building when it was new, 1936 | Image: Athenaeum of Philadelphia

The Philadelphia General Post Office stayed in use as a grand postal distribution point until official talks began about moving out in 1999. In November of 2000, after a decade or so of internal and external negotiations, the University of Pennsylvania started negotiating for the building and associated properties for campus expansion (acquisition of the property was key to Penn’s plans to expand east, reducing conflict with West Philly neighbors). In 2004, The University made an agreement with the Postal Service to lease 223,892 sq. ft. of the 862,692 sq. ft. of space back to the Post Office until they moved and use the rest for their own purposes. The deal closed in August of 2007 for $50.6 million.

Penn then turned around and flipped the building to the Brandywine Realty Group the same day. I guess Penn just wanted the parking lot, which they combined with their own adjacent empty property to the create the beautiful new 24-acre Penn Park, which opened in September. Once the Post Office moved into their extremely ugly new building a block away, Brandywine spent the next three years on a 252 million dollar renovation of the building inside and out, making it part of their new Cira South development. They solved the parking issue by demolishing the old truck terminal annex and building a super-massive parking garage. 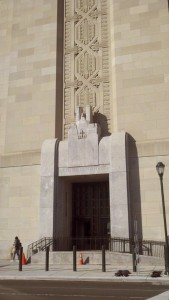 Who knew the Gateway to Valhalla would have a wheelchair ramp? | Image: GroJLart

Brandywine did not pull any punches with the renovation. The facade was completely cleaned and restored… they even went as far as seamlessly rebuilding the hole in the side of the building created for the pedestrian bridge that once linked to the Truck Terminal Annex. A huge skylight was installed in the super-thick roof that brings natural light down into four stories of the building. They also restored the windows to their original look and made them more environmentally friendly. There were made blastproof, so if you were thinking of walking up and unloading a minigun on the place, you’re screwed. The renovation was completed at the end of 2010, and 5,000 IRS employees now call the building home (or work), and will be there for at least the next 19 years.

The building is now officially called “IRS 30th Street Campus,” which is a pretty dumb name. They should have called it the This Building is Gonna Kick Your Ass Building. The best part about it, of course, is that the full Brandywining of the place is still yet to come. The Cira South tower and unnamed Cira residential tower are still to be built (and hopefully will be someday). In any case, this is probably one of the greatest examples of a modern re-use of an antiquated building in the entire region.