Hoist Up Your Azure and Maize 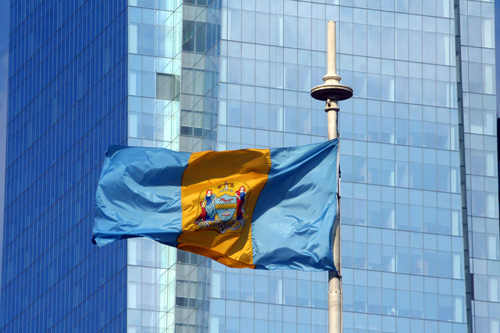 Philadelphia’s city flag, designed by Reverend Doctor Henry C. McCook in 1895, turns 117 years old today. At noon, the Partners for Civic Pride, led by Philly Flag Lady Brenda Exon, will fete the occasion on the plaza of the Municipal Services Building. The Flag Day celebration is put on by Partners for Civic Pride, an organization which seems to exist solely for the promotion of Philadelphia’s flag. I’ll be there, and I hope you will too. 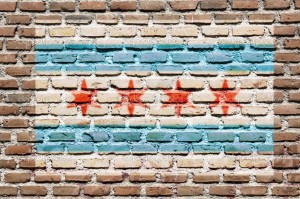 I’ve been thinking about city flags a lot lately, since I heard this story on the excellent design podcast 99% Invisible a month ago. Like 99% Invisible’s Roman Mars, I wasn’t really aware that cities had flags before I too moved to Chicago, where the simple, iconic city flag flies not just in front of civic buildings, but on homes, backpacks, cops’ shoulders: pretty much everywhere. Chicago’s flag is widely identified with the city itself and lives among the citizenry, ever present and constant. I bet that half the residents of Chicago own a flag or some other object with the flag on it. I myself have a St. Patrick’s day t-shirt which replaces the four red stars with four green shamrocks.

I do know what Philadelphia’s flag looks like, due largely to the affection for it held by Brad Maule, who as proprietor of the late, great phillyskyline.com, marked the occasion of Philadelphia’s Flag Day.

Now, Philly’s flag, with its distinctive azure blue and golden yellow (or “maize”), evoking the city’s Swedish roots, and the municipal coat-of-arms, emblem of William Penn’s ideals of peace and plenty, is just fine. But the North American Vexillological Association–the folks who study flags–only ranked our flag #31 (Chicago’s is second) in a national survey, based on their “five basic principals of flag design.”

Might we do better with a more captivating design? Chicago’s flag is the result of an open city-wide competition that solicited over a thousand entries from Chicagoans of all walks of life–a rather fun way to create an emblem for a place seeking its identity in the ever-changing world. A Philly flag competition is an idea I’ve been toying with since I heard the Invisible 99% podcast. Stay tuned…you might get a chance to reimagine the Philly flag.