With its prominent arched windows and terracotta signs that say “Wm. Mulherin’s Sons,” this long-vacant building under the El at Front and Master is one of the most intriguing in Fishtown. Now the building is for sale, which gives us an excuse to peek inside and look up the company. Turns out, Wm. Mulherin’s Sons was a distillery, and an old Fairbanks scale (the second photo above) is still in there, perhaps a remnant from its original use. 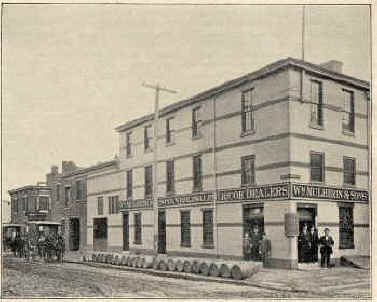 We couldn’t find much on Mulherin. He  was an Irish immigrant who started his distilling business in 1887 and passed it along to his two sons.  This undated image shows a far plainer facade–perhaps the company remodeled at some later date  (the arched windows can be seen in a 1916 photo) which might explain why the signs say  “Wm. Mulherin’s Sons” rather than “Wm. Mulherin & Sons.”

Mulherin produced several brands of rye whiskey, and had interests in Mutual Distilling Co. of Uniontown, KY and the Philadelphia Rye Distilling Co. of Eddington, PA. The building seems small to have produced alcohol on premises; perhaps it served as offices. Then again, 68 Philadelphia companies are listed as distillers in a 1914 industrial directory, so maybe production did occur on that small a scale.