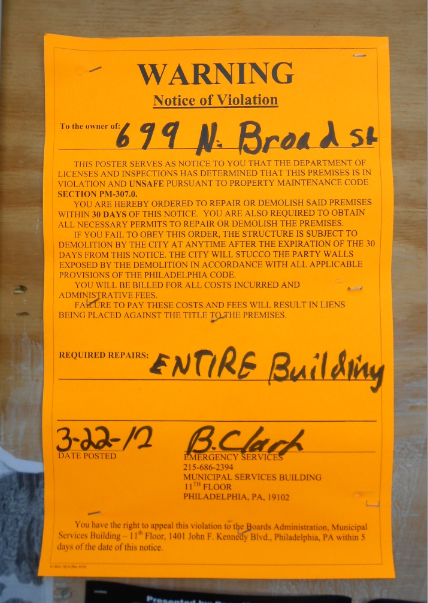 Preservationist Shawn Evans reports that L&I has given the owner of the Divine Lorraine 30 days to fix or demolish “entire building.”

According to the Historical Commission, after this week’s fire, L&I issued violations. Today’s notice is in reference to these new violations. The city will accordingly take additional additional steps to prevent trespassers from entering the building: starting today, a contractor will use masonry to infill openings, remove lower sections of the fire escapes, demolish a small shack out building and repair the fence. For Peter Woodall’s plea to the city to act to safeguard the building, published here Wednesday, click HERE.

The property owner has given the City permission to do the work, the cost of which will accrue in a lien. Says Historical Commission executive director John Farnham in an e-mail to John Gallery, executive director of the Preservation Alliance of Greater Philadelphia, made available to the Hidden City Daily, “the City is not
considering demolishing either building at this point in time. The highest levels of the administration have authorized this action.”

Further, writes Farnham, “it is good news, not bad news.”