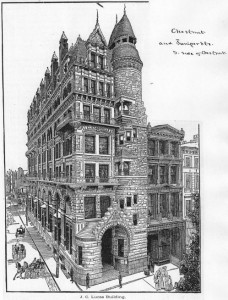 Sketch of the Hale Building as it originally looked 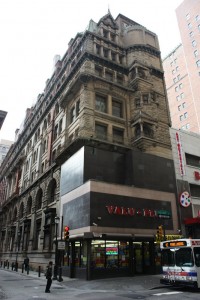 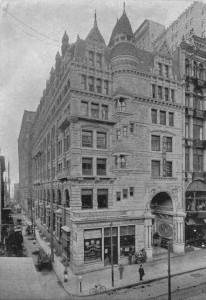 The Hale Building when it was the Garrick Theater, 1909

By the time Willis Gaylord Hale died in 1907, broke and ridiculed, 115 of his deliriously unsubtle buildings lined Philadelphia streets. In less than a century nearly all of them have burned down or been demolished.

Today, only a few of Hale’s designs survive: The Divine Lorraine, which looms over Broad Street as a graffiti-covered icon of urban decay, and the Hale Building, Chestnut Street’s hideous yet heartbreaking ogre.

The seven-story Hale, once known as “perhaps the most bizarre-looking skyscraper of the nineteenth century” came close to being converted into a boutique hotel recently. Developer Alon Barzilay proposed the idea to the Philadelphia Historic Commission in 2010. Plans are currently on hold but the building that has been known as the Penfield Building, The Lucas Building, and Keystone National Bank while serving as office space, “bachelor apartments,” and home to the Garrick Theater, might one day welcome guests again. 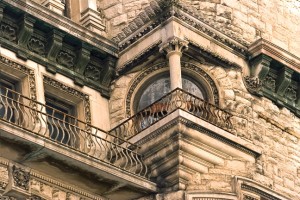 A Philadelphia chemical manufacturer, William Weightman, commissioned Hale to design an office building that would suit a narrow lot on the corner of Chestnut and Juniper Streets. The eccentric result pleased Weightman so much that, according to Michael Seneca, the Director of the Digital Imaging Center at the Athenaeum of Philadelphia, “he officially named it after the architect shortly after it was finished.” Unfortunately for Hale, not everyone shared Weightman’s enthusiasm.

By the time plans for the building were complete, American architecture had rejected Gothic ornamentation in favor of clean, classic lines. Meanwhile Hale had created an architectural Frankenstein out of various parts and pieces of extreme Goth and High Victorian.

“Crude…violent…revolting…ignorant…higgledy-piggledy,” critics declared when The Hale Building appeared on Philadelphia’s streetscape in 1887. “Absurd…irrational, incongruent and ridiculous…a restless jumble,” they proclaimed in Architectural Record, 1893. The Hale Building became known as the most offensive of his works.

In the face of such harsh criticism Hale remained true to his own outlandish aesthetic. He continued designing buildings in styles that were bolder, more whimsical and even more outrageous than the one he’d brought to Juniper Street. 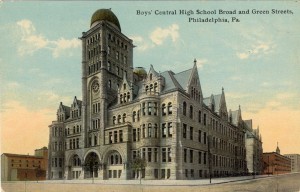 He designed The Empire Theater in 1890.

He designed the Divine Lorraine in 1892.

For Philadelphia students he created Central High School III in 1894.

The story of Willis Gaylord Hale hints at the history of architecture in Philadelphia. During the 150 years before Hale designed his first building the city had already gone through seven major shifts in architectural taste with the passing of decades. The preferred style had moved from Georgian to Palladian to Federal before the 1800s then Greek Revival, Gothic, Italianate and Second Empire by the time Hale launched his career in the 1870s. It’s no surprise then that the careers of Philadelphia architects rose and faded with each passing trend.

At the age of 125, the Hale Building still stands at Chestnut Street, now looking decrepit, decayed and projecting a world weariness that is hard to ignore.

Maybe the Hale’s palpable moodiness is an accumulation of a city’s memories. The Hale has witnessed recent changes in Center City that have been even more dramatic than the swings in architectural taste its designer endured more than a century ago. 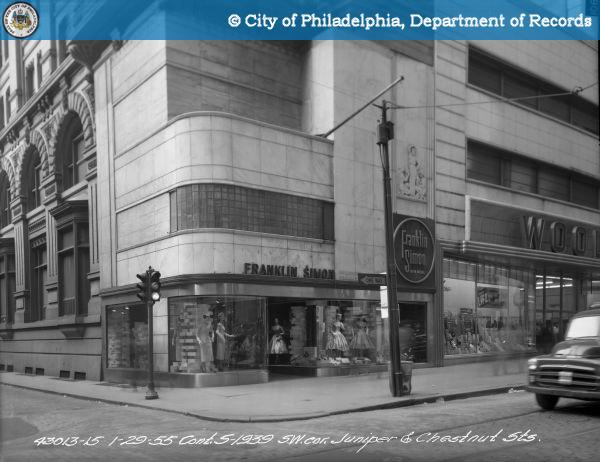 When the Hale Building was still new, Chestnut Street was Philadelphia’s premier shopping district. Sidewalks were lined with fashionable ladies stores, haberdasheries and even piano stores all the way to Broad Street. The neighborhood dazzled, according to Bob Skiba, president of the Association of Philadelphia Tour Guides, who is also the Archivist at The William Way Community Center for the Gay, Lesbian, Bisexual, & Transgender Community, and a Hidden City Daily contributor. Amidst fashionable women’s clothing stores there was a cooking school, an opera house and a dance company well into the 20th century.

During the 1950s and 1960s there were Turkish bath houses for men all across Center City. The Hale Building, on the Sansom Street side, featured Drucker’s Bellevue Baths, a health club listed in gay guides through the 1960s. All was well along and around Chestnut Street until the 1970s when city planning inadvertently turned the area into a seedy ghost town. An idea to link Independence Hall to the Schuykill River via a trolley up Chestnut Street was abandoned before the city’s Bicentennial festivities took place. Instead, Chestnut Street was turned into a pedestrian mall that attracted few visitors. 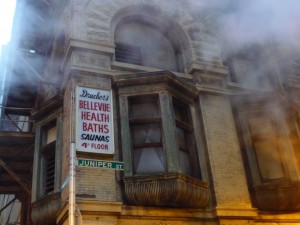 Soon the fashionable shops closed, to be replaced by check cashing places, dollar stores and wig shops. Meanwhile, areas along the Vine Street Expressway construction site had been Philadelphia’s ‘red light district’ for many years but by the 1980s, when the expressway was close to complete, the city’s pimps, hustlers and prostitutes closed in on the Hale Building. The corner of 13th and Chestnut and its environs became seedy until a concerted effort of Center City’s gay community, the Center City District, developer Tony Goldman, and other business interests rejuvenated the area, a process that continues to this day.

While Chestnut Street improves and Philadelphia’s nearby “Gayborhood” thrives it’s the Hale Building that continues to decline. It seems to be getting more hideous each day–like an architectural Portrait of Dorian Gray for Philadelphia’s sleek skyscrapers.

But the Hale might yet emerge from layers of neglect and derision to become part of Chestnut Street’s renewal. If after all, the Hale one day opens as a hotel, Hidden City contributor and Hale champion GrojLart, (who blogs at Philaphilia), has already jokingly proposed a name. Some people might consider unsuitable, even offensive–in other words it’s a name that might have delighted Philadelphia’s maverick architect: The “Willis G. Hale Ain’t Nuthin’ to (Mess) With Hotel.”