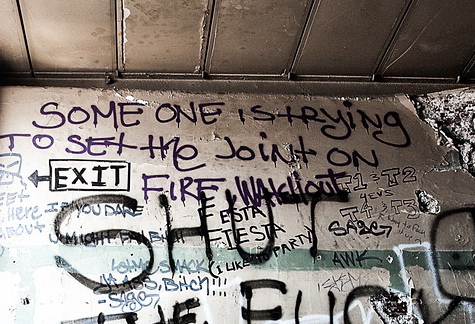 “Someone is trying to set this joint on fire.” Photo: Jeff Weisberg

There was a small fire at the former Divine Lorrraine Hotel last night and we can’t say we’re surprised–people have been entering the building with ease for the last two to three months, maybe more.

The city told us a month ago that they are monitoring the buildings on a daily basis, but this seems unlikely. There is a big hole in the fence and not one but two ladders up to an open window in the old laundry building, through which the main building can be accessed. As if these indications weren’t obvious enough, someone painted the hand of a monster with pink fingernails reaching down from the roof of the laundry building that’s awfully hard to miss.

Now it’s true that keeping the Divine Lorraine sealed shouldn’t be the City’s responsibility, since the building is still owned by local developer Michael Treacy and investors from Michigan and the Netherlands. But given the owners’ seeming disinterest in keeping people out, the City needs to step in, as it did last year when filled in the lower windows with concrete blocks. 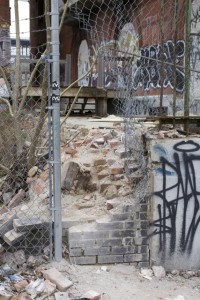 The Divine Lorraine has become a powerful symbol of beauty , decay, and possible rebirth in Philadelphia. Many people care about its fate, and there is the chance that beyond someone starting a fire to keep warm (and it was unseasonably warm yesterday) that someone may be trying to burn it down on purpose.

The Nutter administration has properly called attention to the importance of rehabilitating this building, which is both a historic landmark, and a critical part of revitalizing North Broad Street. But before anything else, they must secure the building, which is truly an everyday job, even with the ground-floor windows sealed with concrete block. The devil is in the details, and if the city isn’t more diligent, the Divine Lorraine could burn again–with far more catastrophic consequences.