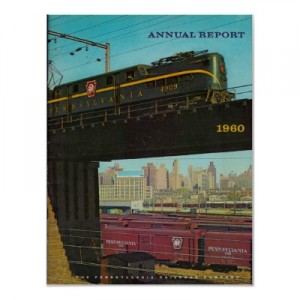 The cover of the 1960 Pennsylvania Railroad’s Annual Report.

Never mind New York’s High Line, the now iconic urban public park built on a freight rail line above the streets of the west side of Manhattan. This elevated route was constructed in the 1930s and no trains have run on it since 1980. Philadelphia has its own High Line–and it’s not the Reading Viaduct. Not only is Philadelphia High Line older than New York’s, but it is still actively used. Its formal name is the West Philadelphia Elevated Branch, although it’s been called the “High Line” for decades.

The High Line was completed by the Pennsylvania Railroad (PRR) in 1904. Carrying two-tracks (only one active) and flying nearly fifty feet high, it incorporates the longest brick arch bridge in the United States. The elevated trestle was constructed specifically to enable freight trains to bypass the 30th Street Station complex entirely, so as to avoid mixing freight and passenger railroad operations.

As with most other railroad viaducts and bridges in the Philadelphia region, the High Line comes from the time when the railroad was king. All were built with private capital, in this case, that of the Pennsylvania Railroad—”The Standard Railroad of the World.” The Pennsy structurally overbuilt and impeccably maintained its right of ways and was known for the quality and durability of its roadbeds, tunnels and bridges.

In addition, long viaducts like the High Line provided a faster way to get freight cars and the like through town. And by removing rail traffic from the streets of the busy growing city, the railroad sought to eliminate dangerous grade crossings, which caused an unrelenting urban slaughter as trains became larger and faster, yet still continued to pass through city streets. Many PRR bridges are still in service, some well over 100 years old and carrying loads never expected when they were designed and constructed. Some of best examples are in Philadelphia. 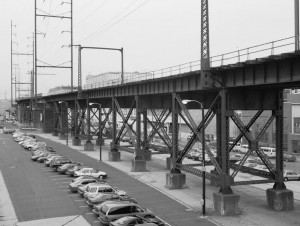 The High Line heads south just below the Pennsylvania Railroad’s Zoo Junction (Interlocking/Tower), which to this day is the busiest and most famous rail junction in the United States. This marvelous maze of switches, signals, tunnels was built in stages between 1885 and 1930 and soon became the most important junction on the entire Pennsy system. It still handles train movements from three different directions: north to New York, south to Washington, D.C., and west to Harrisburg and beyond.

After hugging the Schuylkill Expressway for a bit, the High Line passes above Spring Garden Street, at which point it changes from a brick arch structure to a steel girder/post and beam one. It soars over SEPTA’s Powelton Yards and the Penn Coach Yards of 30th Street Station, pays memorial tribute to the “Drexel Shaft” (a steam power plant built by the PRR and demolished in 2009), and heads south over Market and other east-west streets. 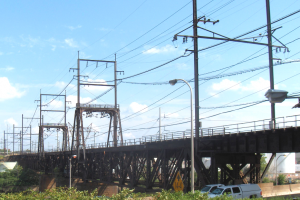 It then flies alongside Penn Park, the University of Pennsylvania’s new recreation center, which stretches from Walnut to South Streets. The space this park inhabits was Pennsy property (railyards) for the longest time, but was more recently owned by the United States Postal Service. Nearby was once the Philadelphia Commercial Museum, which later became the Civic Center complex, and now the bio-medical and hospital nexus of Penn Medicine and Children’s Hospital of Philadelphia.

The West Philadelphia Elevated then passes over South Street and goes by Arsenal Junction (Interlocking/Tower), which is abandoned and graffiti covered. The line then crosses over the Schuylkill River via the Schuylkill Arsenal Railroad Bridge. Built in 1885-86 by the Pennsylvania Railroad, this deck truss bridge got its name from the Schuylkill Arsenal, once located near the bridge’s eastern approaches. (Today, the historic arsenal site is a PECO/Trigen power station.) The 1885-86 bridge, now single-tracked, replaced the original Arsenal Bridge, which the PRR built in 1861. 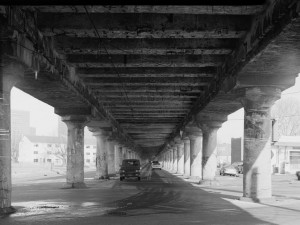 Under the 25th Street Elevated | Source: Library of Congress

The line then turns south at Washington Avenue and runs into the Grays Ferry neighborhood. In a way, the High Line is replicated by the 25th Street Elevated, which carries railroad traffic over 25th Street all the way to Greenwich Yard in South Philadelphia. The Pennsylvania Railroad constructed the viaduct from 1926 to 1928 as part of an uncompleted freight railway ring that would have gone above Washington Avenue as well. Columns, beams and parapets are decorated in the Art Deco style. The structure was originally built for four tracks but now carries two. Though huge, bulky and seemingly well constructed, the 25th Street Elevated is crumbling and shedding chunks of concrete onto the street below. This viaduct is thus an exception to the longevity of PRR bridges. Nevertheless, it is still in use.

Indeed, all of these Pennsy structures in Philadelphia are soldiering on into the 21st century, carrying heavy freight traffic above the city’s streets and neighborhoods. Interestingly, there was a proposal in the late 1960s to convert the High Line into the westbound portion of the Schuylkill Expressway.