The above photographs of the Divine Lorraine from the Historic American Building Survey were taken in 2000, but they might as well have been taken a lifetime ago. Twelve years, three developers and countless vandals later the former hotel is a gutted, graffiti-scarred wreck. How did it happen so fast?

The deterioration started slowly, beginning after the building left the protective custody of Father Divine’s Peace Mission Movement. The religious group, which has a profound belief in restoring and caring for historic architecture, sold the building to Tony Goldman’s Goldman Properties in 2000 for $2 million. Goldman flipped the building in 2003, selling it along with adjacent properties he acquired to Eric Blumenfeld and other investors for $5.3 million.

A member of the Peace Mission Movement remained as caretaker until 2006, and managed to keep the former hotel in decent shape. There was some vandalism and water damage despite his efforts, but the building remained largely intact. You can see photos from this period HERE.

The building’s condition quickly went downhill after Blumenfeld’s investment group sold it for $10.1 million in 2006 to local developer Michael Treacy and investors from Michigan and the Netherlands. The new owners sold everything of value  and gutted the building, but the project never got off the ground. Financing dried up after the housing market imploded, and Treacy and company eventually defaulted on their loan with New York’s Amalgamated Bank. They also owe the City at least $700,000 in back taxes. 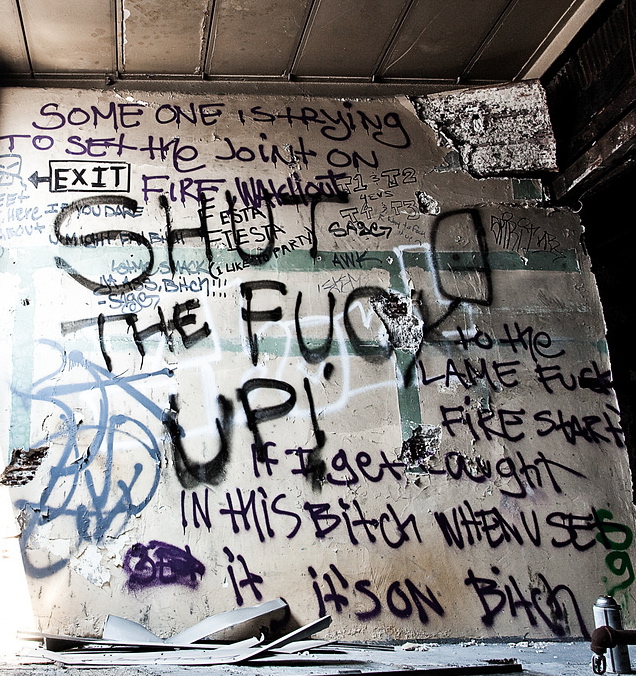 “Some one is trying to set the joint on fire” | Photo: Jeff Weisberg

After the building was gutted, the trickle of vandals, explorers and the homeless became a flood. People were sleeping inside the building, greatly increasing the risk of a catastrophic fire. Even the people living there were worried it might burn, as can be seen in the picture above. Treacy attempted to keep the building sealed, but people were extremely persistent, and continued to break in. The situation became so dire that the City stepped in 18 months ago and sealed the building’s lower windows and doors with concrete block at the cost of the bay windows on the first floor.

To some extent, the Divine Lorraine’s condition is better than it looks. Much of the building probably had to be gutted to create more open floor plans and to bring electrical, HVAC, elevators and other systems up to code. The graffiti can be scrubbed off, the brick repointed, the windows replaced, the interior rebuilt.

Yet doing so will cost more money, and distinctive features that might have been salvaged, like the window frames, are beyond repair. Brass railings, marble and other decorative elements that might have been retained were destroyed. Most critically, Treacy and company’s inability to keep the building sealed put the building at great risk of fire. They–and we–are lucky the building didn’t burn down, like the Julia de Burgos Middle School at 8th and Lehigh did last summer.

Why didn’t the City step in sooner? As is so often the case, officials were roused to action when a worsening situation reached the point where it became an emergency. Now the Nutter administration is working to broker a deal that would finally bring new life to the magnificent structure. Development is creeping up Broad Street, the market for multi-unit housing has revived and financing for large projects is starting to return to the market. Let’s hope the stars align and this iconic building can be salvaged before it’s too late.

This is what the Divine Lorraine looks like inside now. Photos by Jeff Weisberg and Ethan Wallace 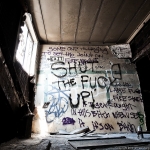