The deepest part of South Philadelphia, south of the Schuylkill Expressway, is full of surprises. An Olmsted park graces the corner of Broad and Pattison–as does the NovaCare Center. The most most of us ever see of this area is the Sports Complex, or, if we work there, the Navy Yard.

But behind the Navy Yard lies a swath of (mostly) post-war residential development that reflects the changing perception of an “urban” environment over the past sixty years. Most call this swath Packer Park, though it can be divided into four major neighborhoods, each of which was developed like a subdivision: Siena Place, Reserve, Packer Park, and Southern Boulevard. (These are the names the Planning Commission gives these neighborhoods in the Lower South plan document.) Of these, Southern Boulevard is the earliest and most urban: it is a stretch of rowhomes not unlike much of the Lower Northeast. As we head west, though, we pass through Bacon-style urbanism and exurban urbanism before finally finding ourselves in New Urbanist urbanism. 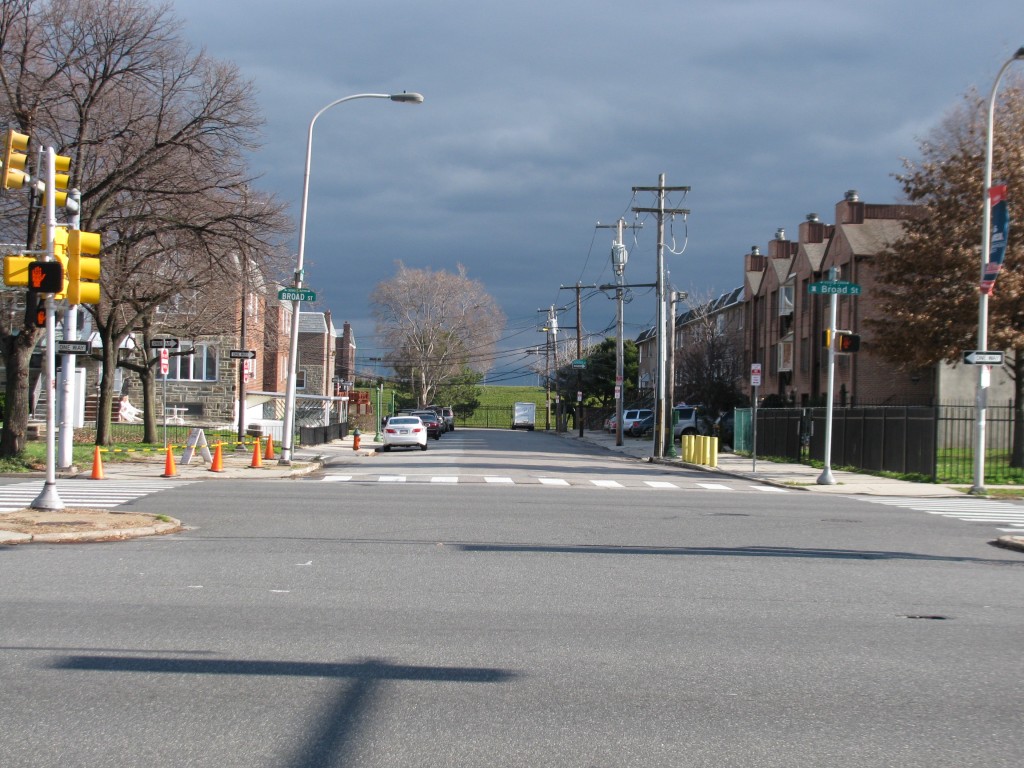 Let us begin with a quick shot of the Southern Boulevard neighborhood. We’re looking down Geary here, across the vast width that is Broad. Southern Boulevard is a tight grid surrounded on all sides by Broad Street, a massive green boulevard with an enormous median and epic east setback due to the subway tunnel; by the Schuylkill Expressway to the north; and two mammoth berms separating it from the Sports Complex. This neighborhood is thus hemmed in with no way to grow, short of a major change in the way the Sports Complex is managed. 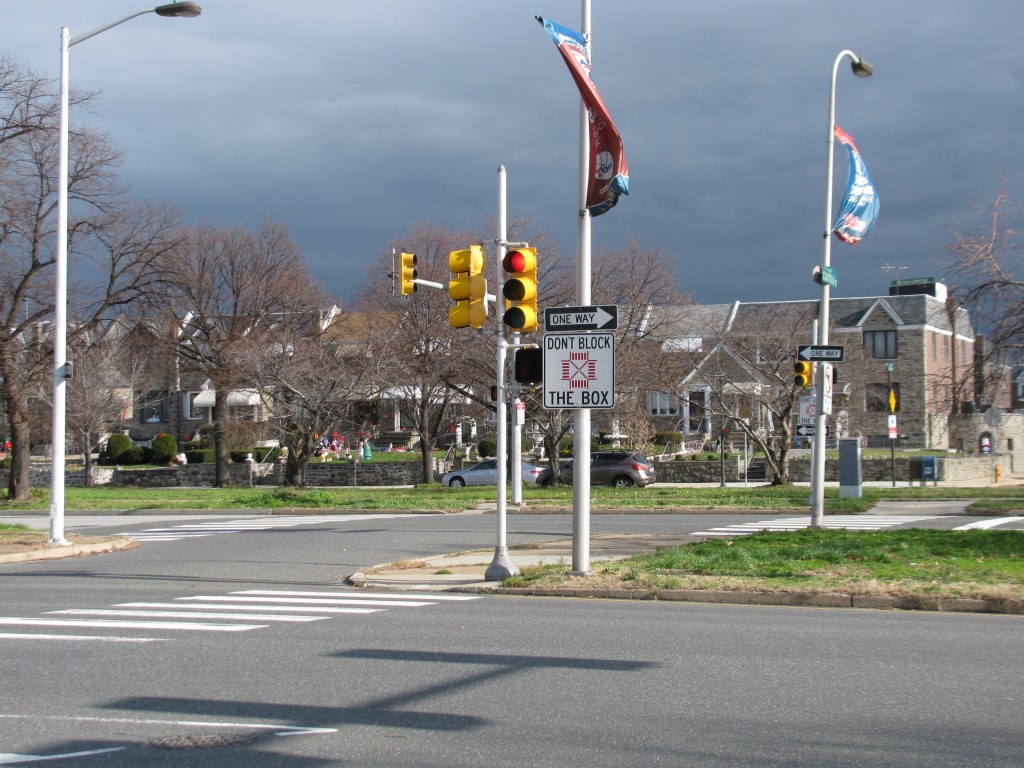 Don’t fear the plex! The Lower South plan proposes corrective zoning for Southern Boulevard, changing it from multifamily to single-family to–in the planner’s words–“prevent duplex conversions.” While there are substantive issues concerning apartments with absentee landlords, rowhouses have been converted into duplexes, trinities, triplexes, etc., in other successful neighborhoods of the city with few realized problems. So long as the house remains the landlord’s principal dwelling, why prevent multifamily conversion? It’s a good way to meet demand in a space-starved neighborhood and a good way for a homeowner to supplement her income. 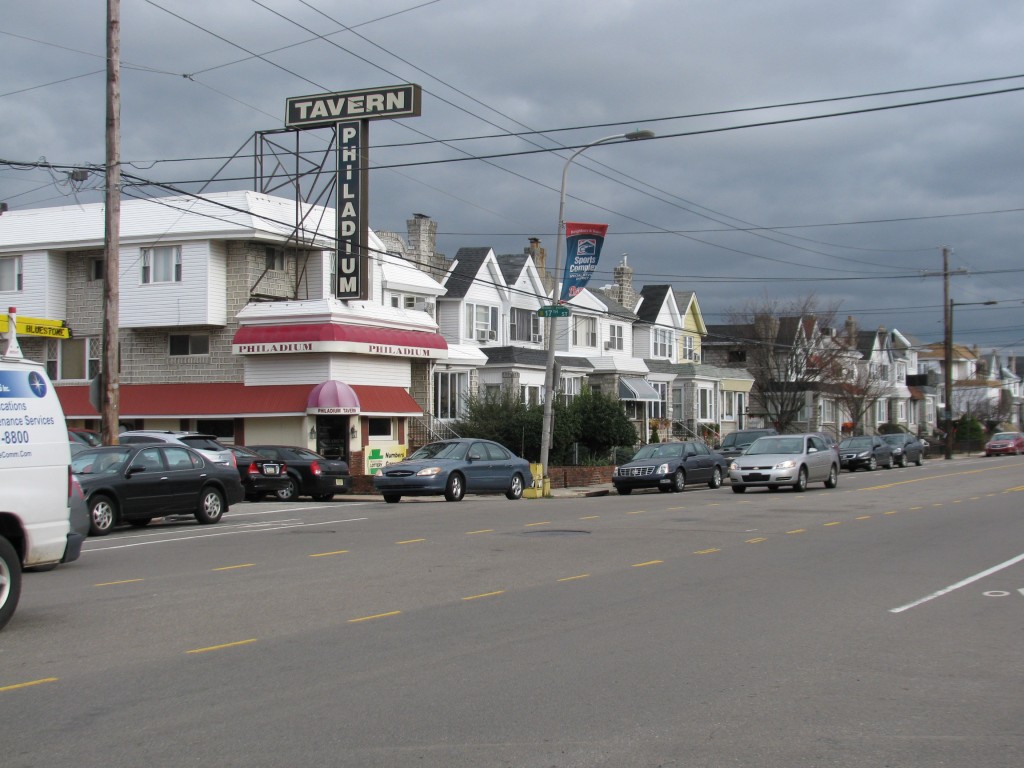 This older area, north of Packer and west of Broad, hugs the Schuylkill Expressway. This Tudor streetscape feels the most urban of any in the area. 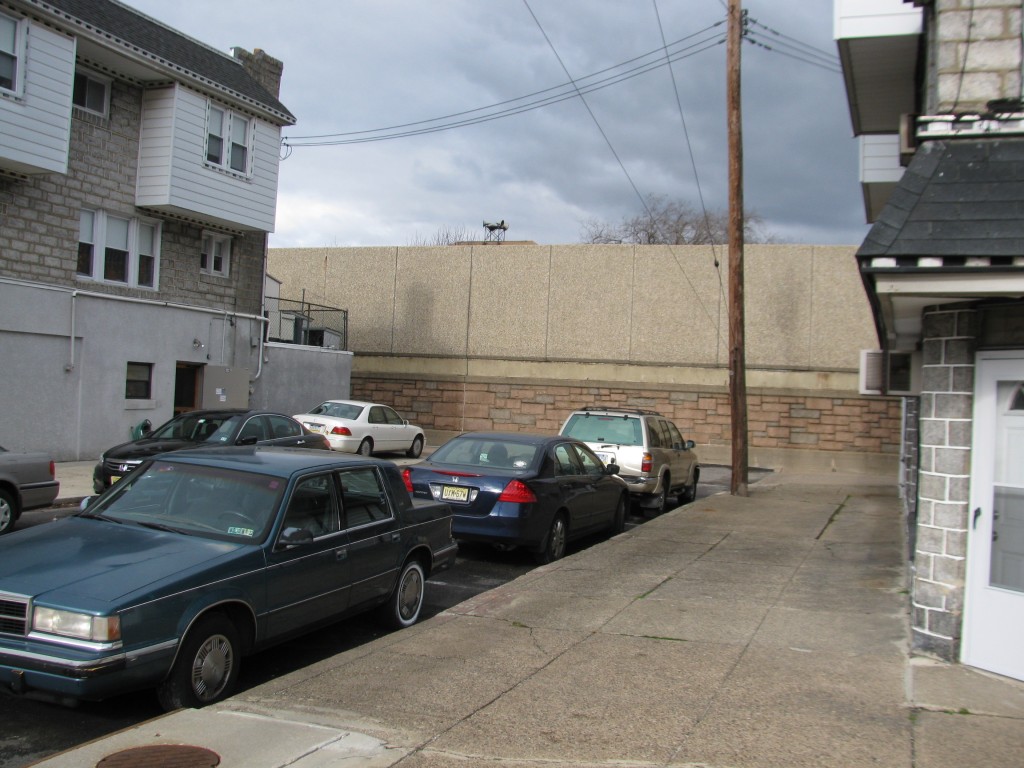 This street is a remnant of the South Philly grid, never truly extended beyond Packer Avenue. Notice the Schuylkill Expressway blocking access to the north. In the rear notice two alley entrances–these rowhouses have basement garages. 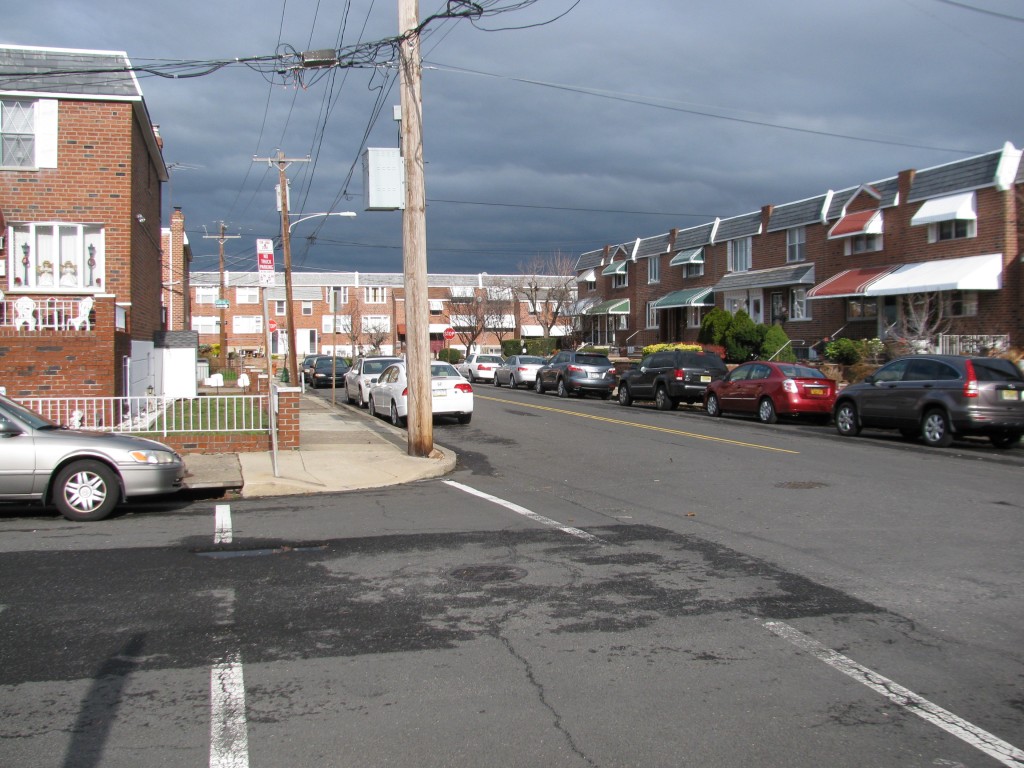 The heart of Packer Park is a large bloc of late mid-century airlite-style rowhouses, much like what one would find in much of the Far Northeast. This neighborhood is characterized by extreme segregation of uses, without so much as a corner bar anywhere south of Hartranft–such places are exclusive to the 1920s-era Tudors north of it. 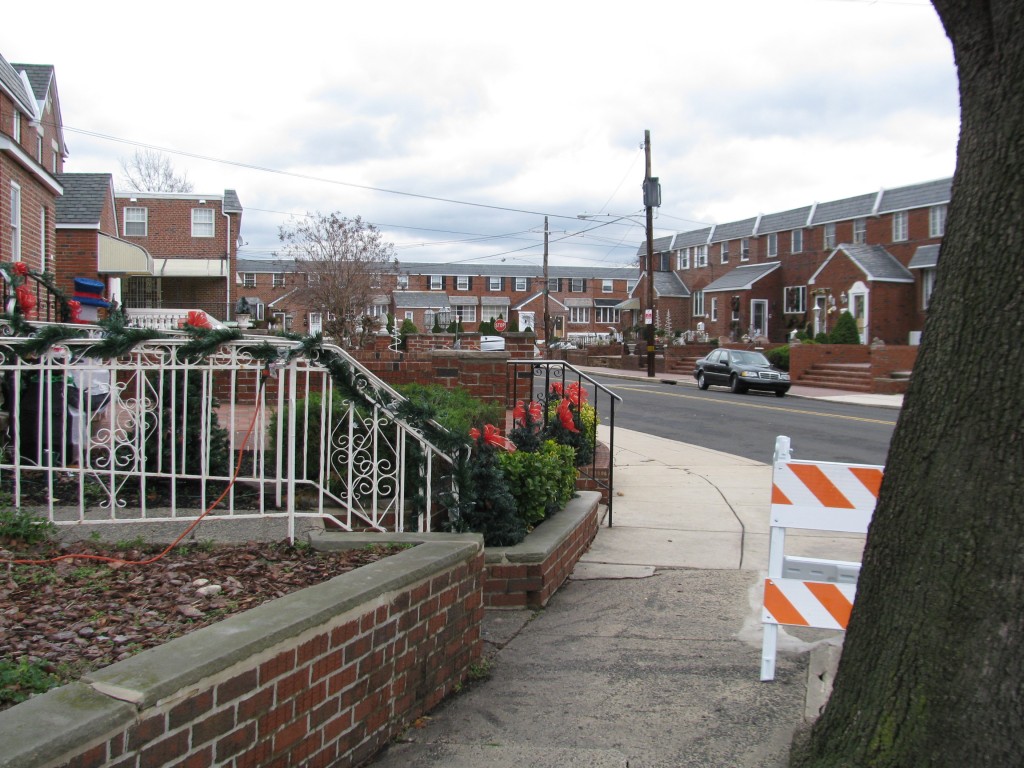 When does urban become suburban? Packer Park challenges us with this question. Its houses are all attached, and relatively close to the street, and that makes it feel urban. Yet at the same time its streets are all very wide–about 60 feet–and the lack of any internal neighborhood commercial negates this somewhat.

This neighborhood is, however, by no means what a friend of mine calls a “house farm”–super-low-density cottages in fields of bluegrass. 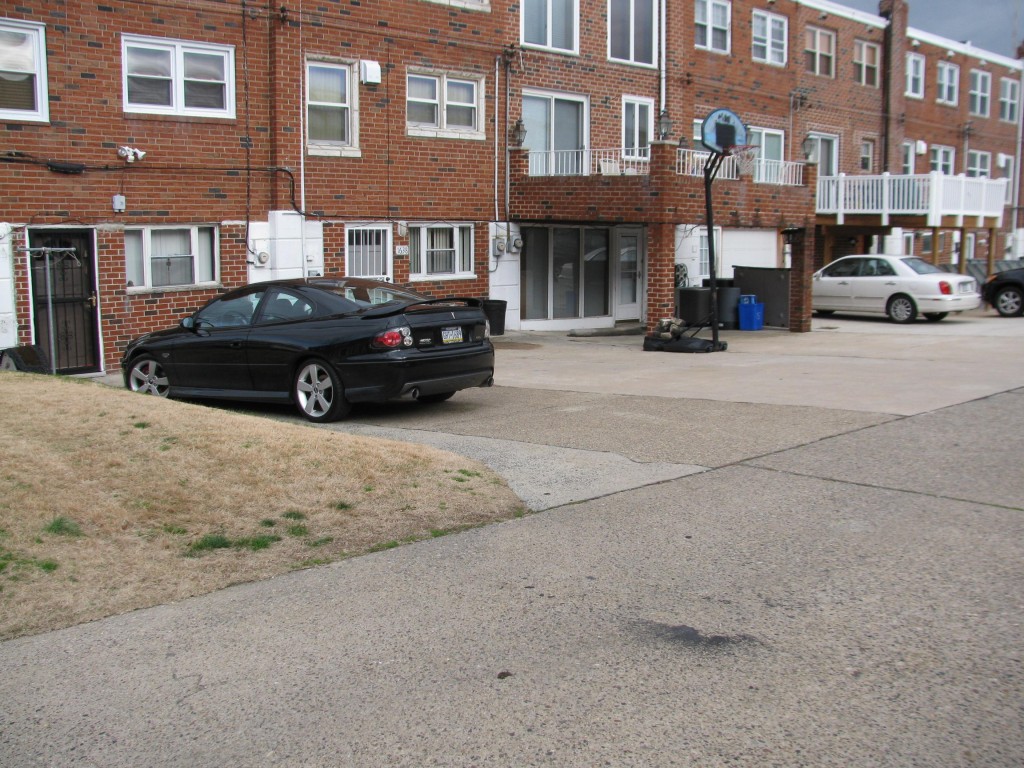 Philadelphia’s 20th-century rowhouse stock commonly has basement garages, most often fronting an alley (although later examples sometimes eschew this). Packer Park is no different. But over the course of time, many of these garages have been renovated, into studios, dens, workrooms, furnished basements, etc., and decks added over the rear drives. Here is an example of these changes as they have occurred over time in Packer Park. 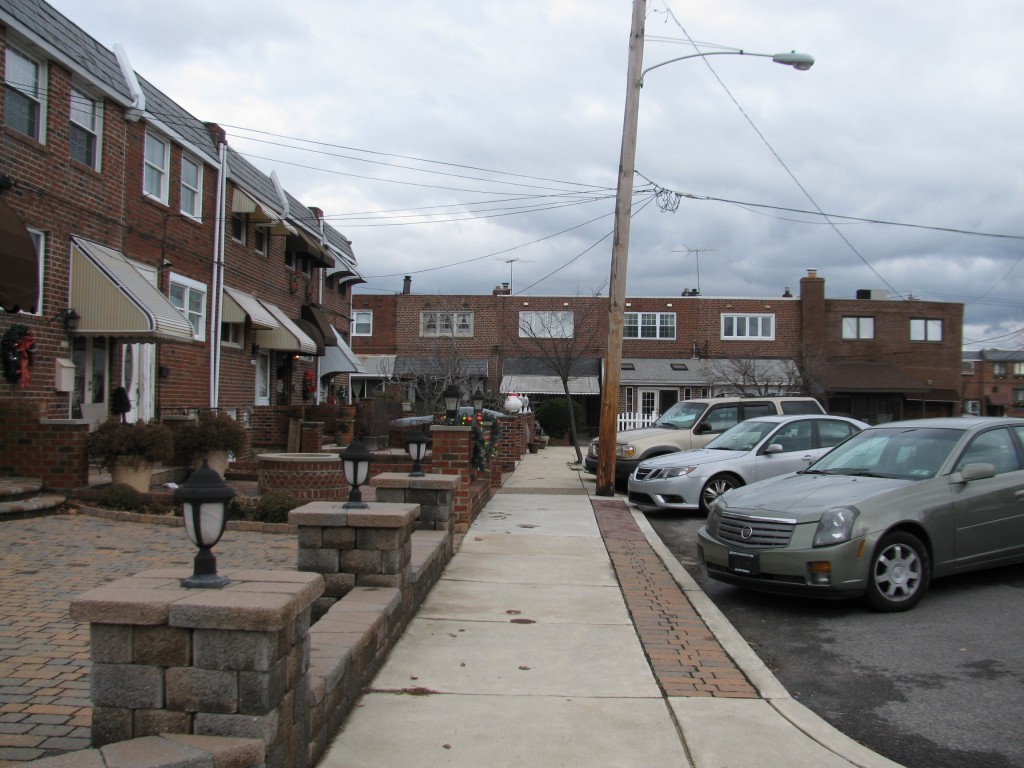 Bacon’s planning efforts include an important, if unsung, innovation: pedestrian interconnectivity, even within disconnected street networks. (I mentioned this while discussing Roxborough a couple of weeks ago.) This is done by pulling cul-de-sacs close to the next street down and placing small sidewalks or plazas between them. Examples of this can be found in Packer Park, Yorktown, western Northern Liberties, and possibly Eastwick and parts of the Northeast. 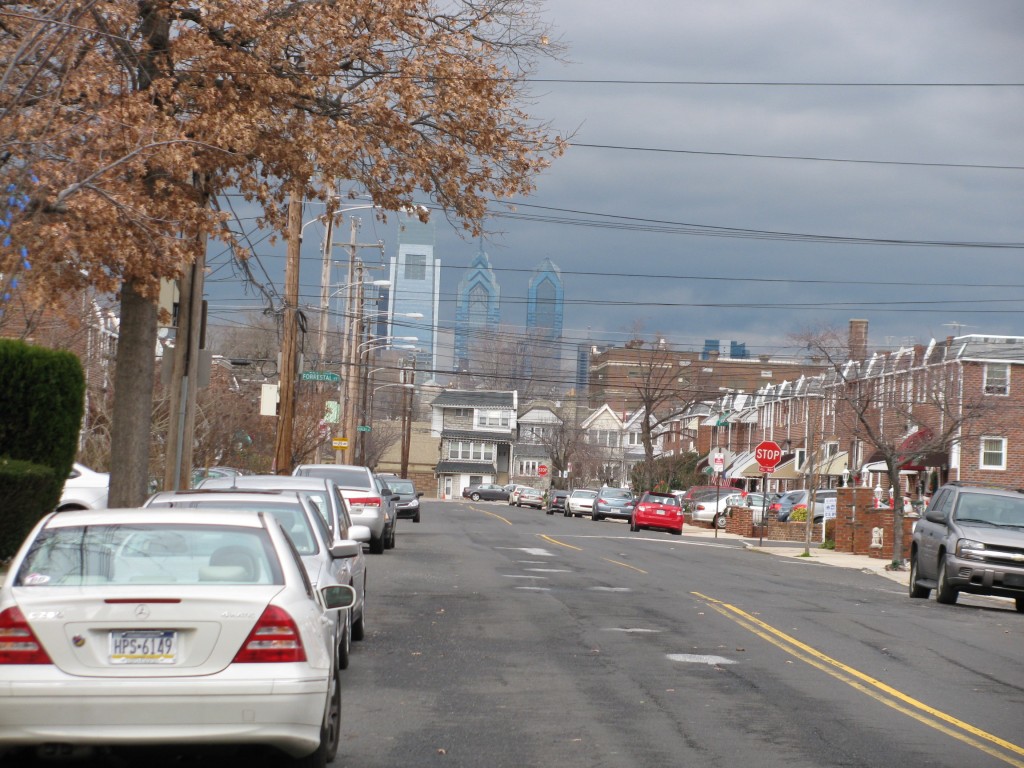 Looking toward Center City, up 17th. Until one realizes that this whole swath of land was once marshy bottomland, it is rather surprising this neighborhood didn’t develop for so long. 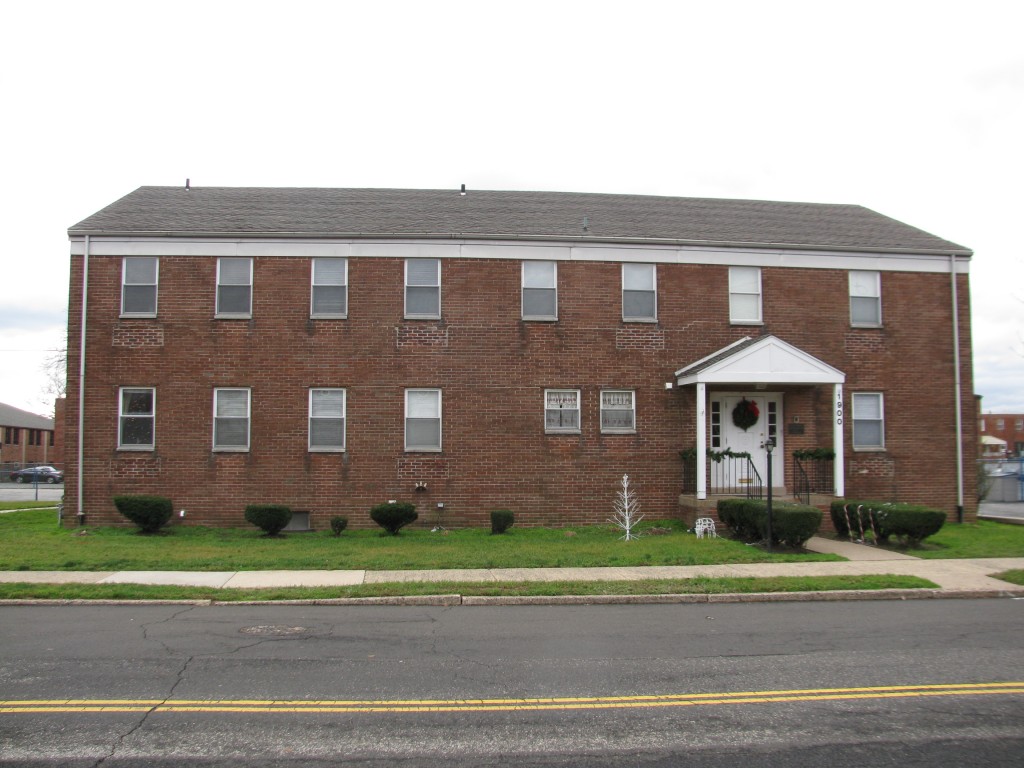 This barracks-like structure hearkens back to the original development in much of this part of the city: military housing, not unlike the late Mustin houses down in the Navy Yard. 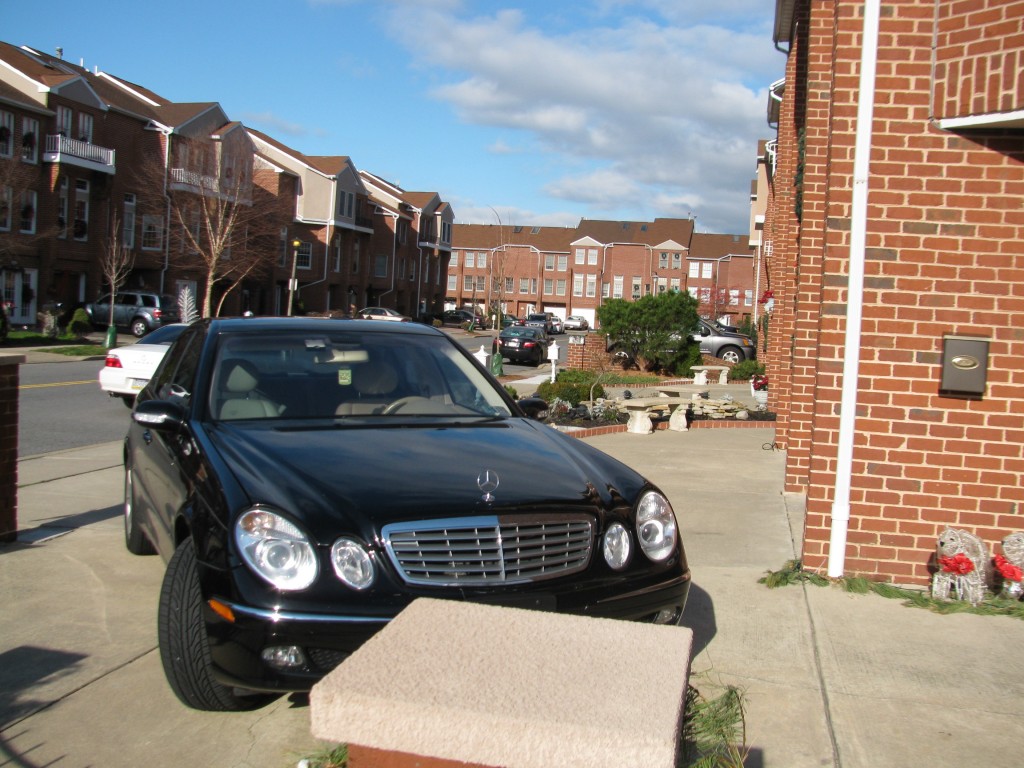 We’re heading forward in time. After the 1960s airlites of Packer Park, these townhouses were developed in the 1980s. Note the foreground Mercedes: this is not a poor area. 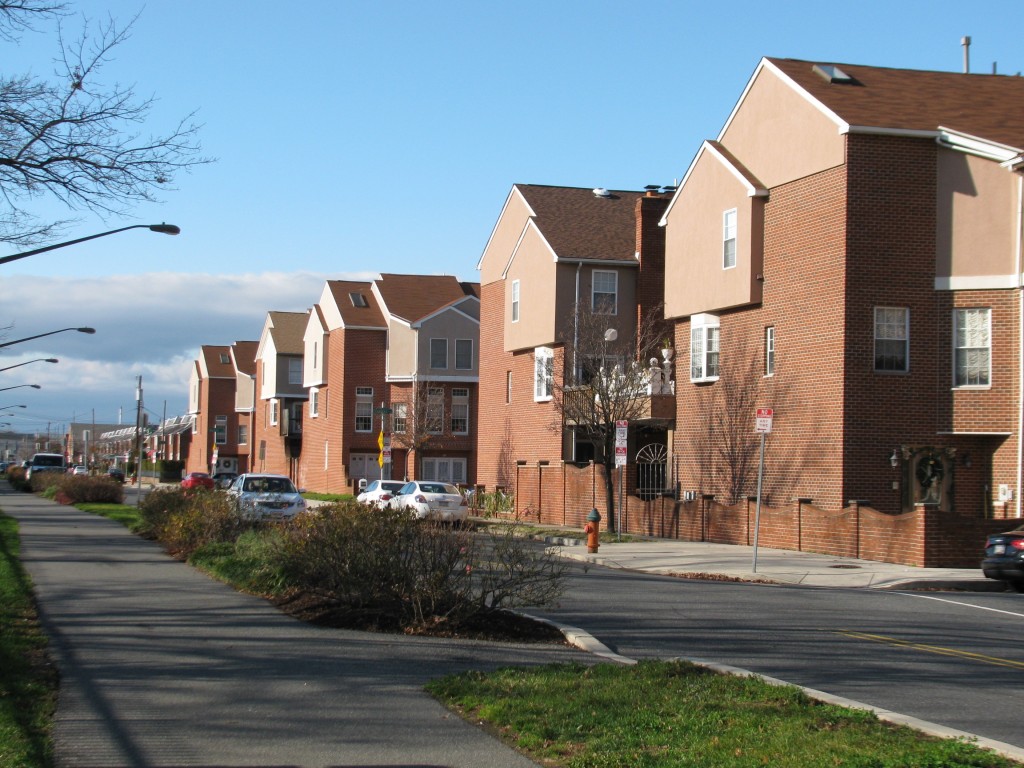 Presenting to the street: a stretch of overwrought  townhouse rooflines–not unlike what one would find in Logan Square. It’s not so much that good taste need not come with wealth (although that is present here too), but more that, unlike in the latter neighborhood, these houses stand nakedly, starkly out, due in no small part to the NovaCare complex right across the street (a supremely poor land-use decision: Broad and Pattison is a subway terminus and should be built up with more than a practice football field). 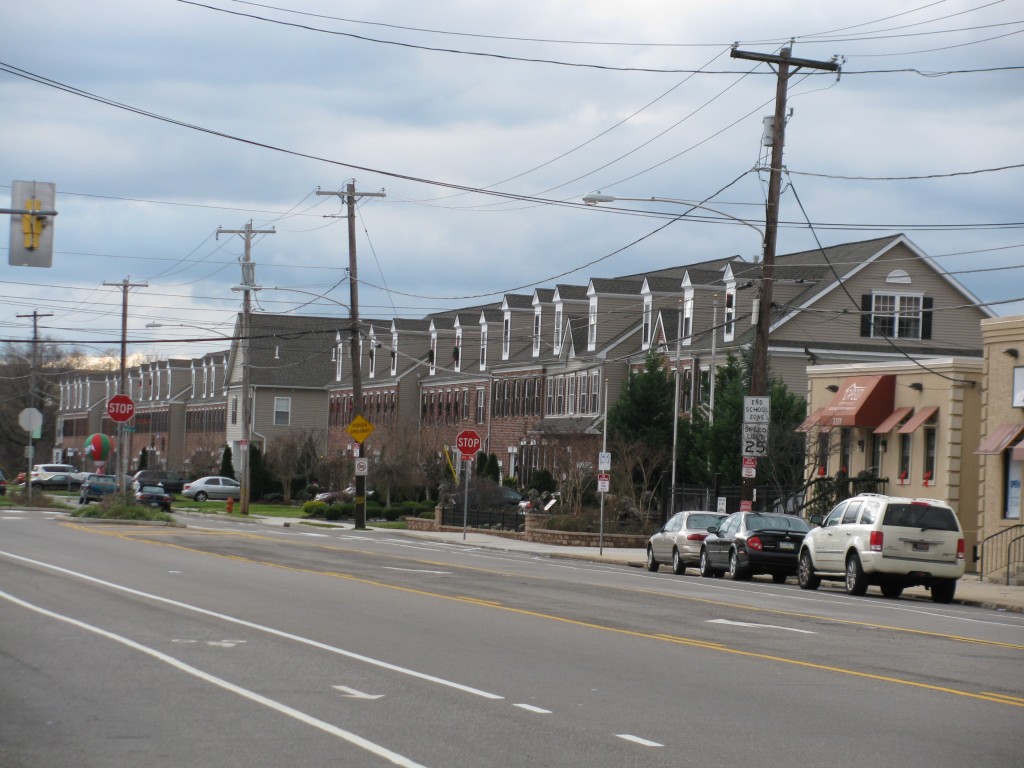 Looking down 20th St. towards Pattison Avenue. The attached housing dominating the background is where we’re heading next. 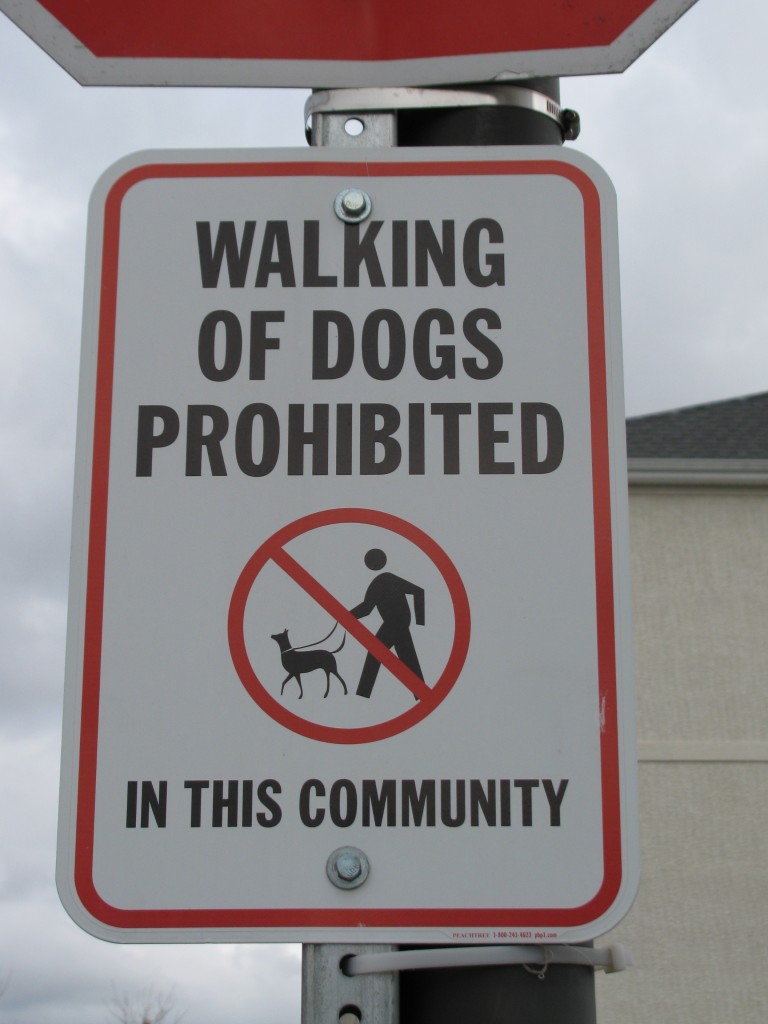 This sign tells you everything you need to know about this section. Also, it’s funny. 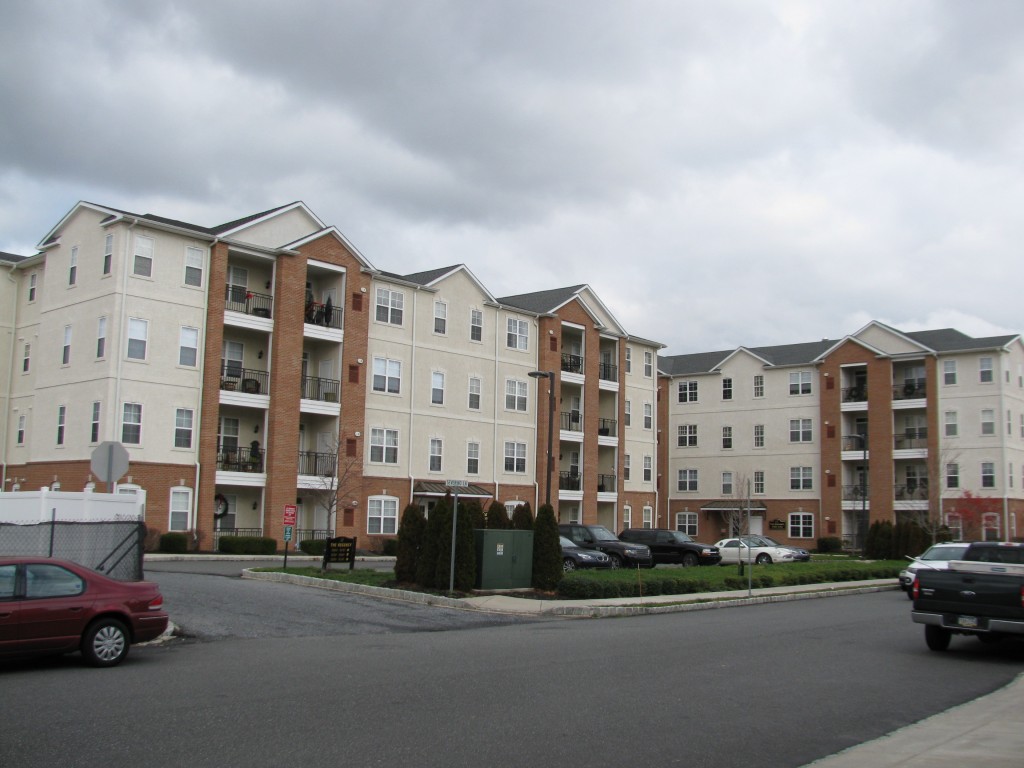 These condos are the only high-density housing present in this area. But their density comes at a cost: excessive amounts of green space coupled with an overly prominent carport. Vive les exurbs. 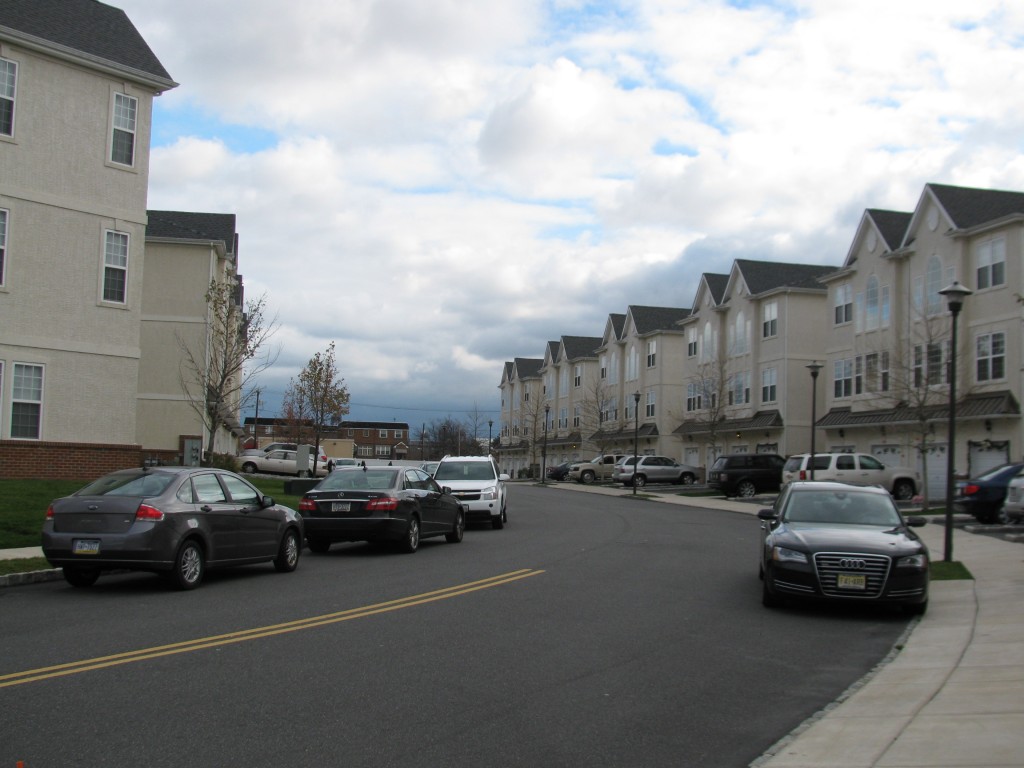 West of 20th, Geary Street turns into Capri Drive, and the style of the houses changes considerably. Where brickwork dominates to the east, this is a stucco subdivision. Built in the mid-2000s, these structures have a bad case of exurban gigantism and a nasty case of snout-house syndrome. Here the in-between question of Packer Park is laid to rest–despite being attached, these houses hardly feel urban. 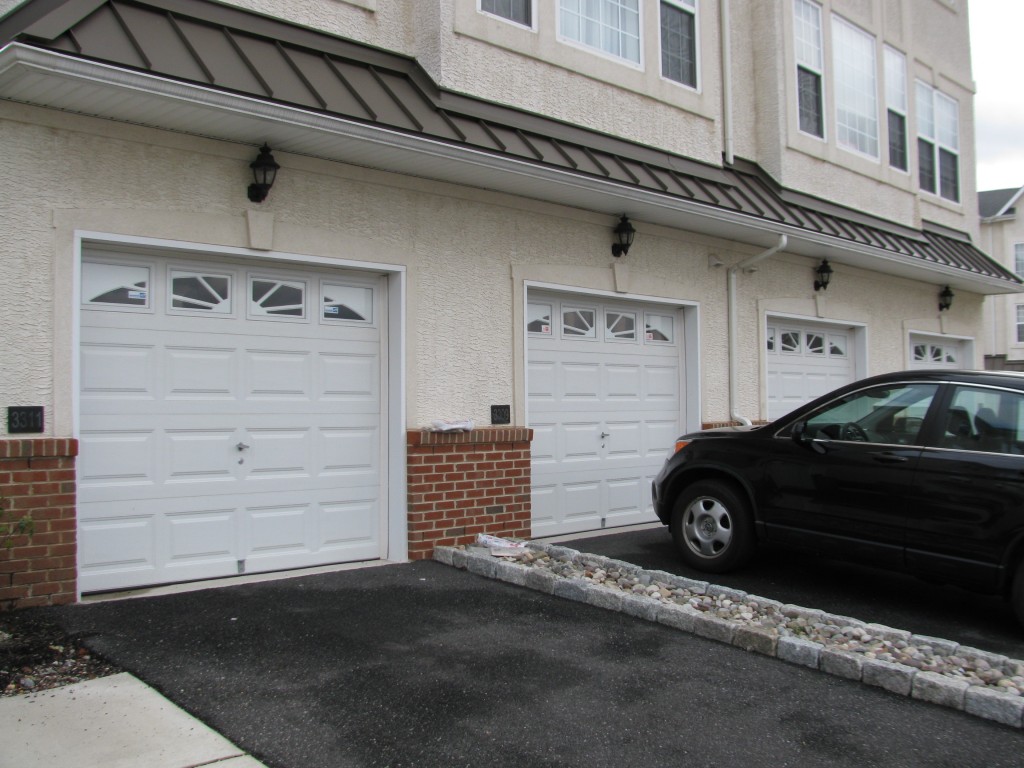 Closeup of Capri’s snout houses. These garages are, on top of everything else, vinyl. 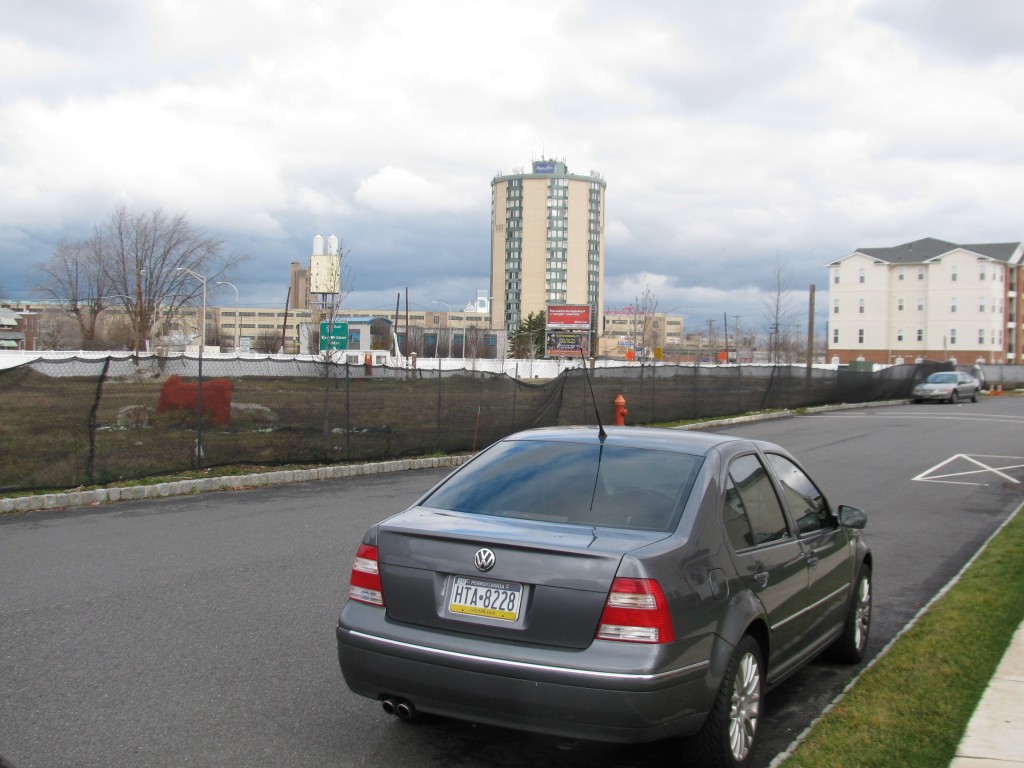 Prepped land between the Reserve and the Capri developments. Behind note a mid-century hotel tower, not unlike the Embassy Suites on the Ben Franklin Parkway. But, though you can see it from here, it is not easy to reach it–you either have to head to 20th and up to Packer, or down to Pattison and up Penrose. What is maybe two city blocks as the crow flies stretches into an odyssey of the better part of a mile.

This is a failure of access at the pedestrian scale. Such failures are deeply exurban in nature. 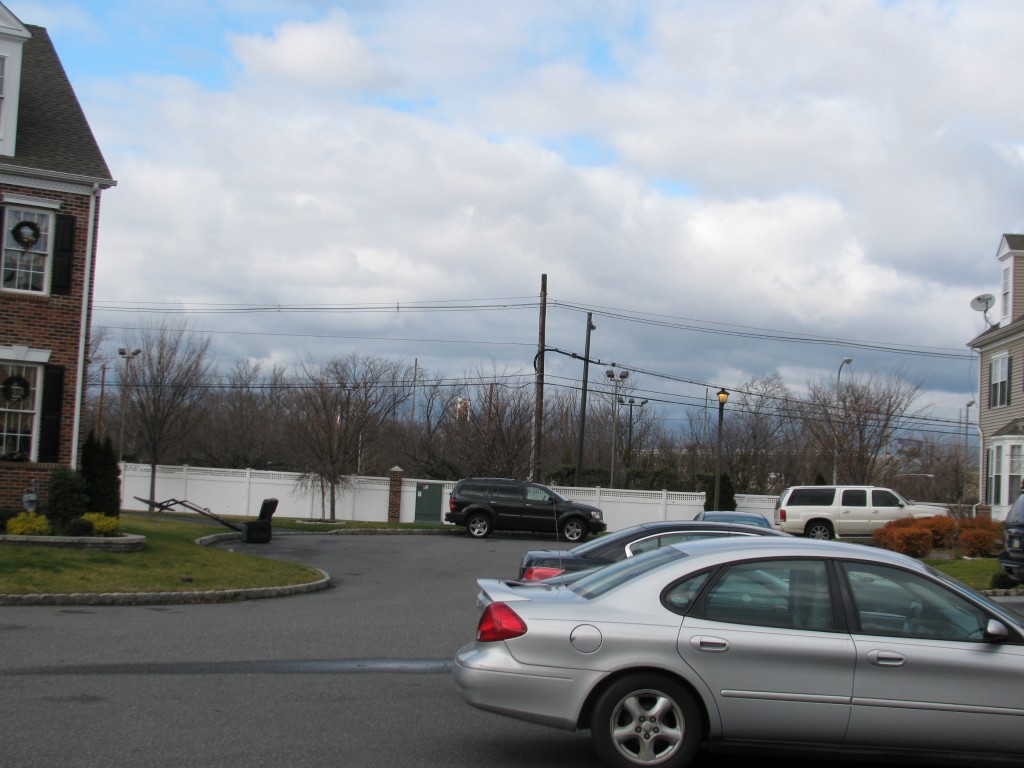 A more blatant case of total access failure on the pedestrian scale: remember the sidewalk cut-throughs between cul-de-sacs and through roads in Packer Park? Behind the white picket fence in the background is Penrose Avenue, a primary access route between the Schuylkill Expressway and Philadelphia International Airport. But where in Packer Park a sidewalk would be extended between this cul-de-sac and Penrose, here–nothing. 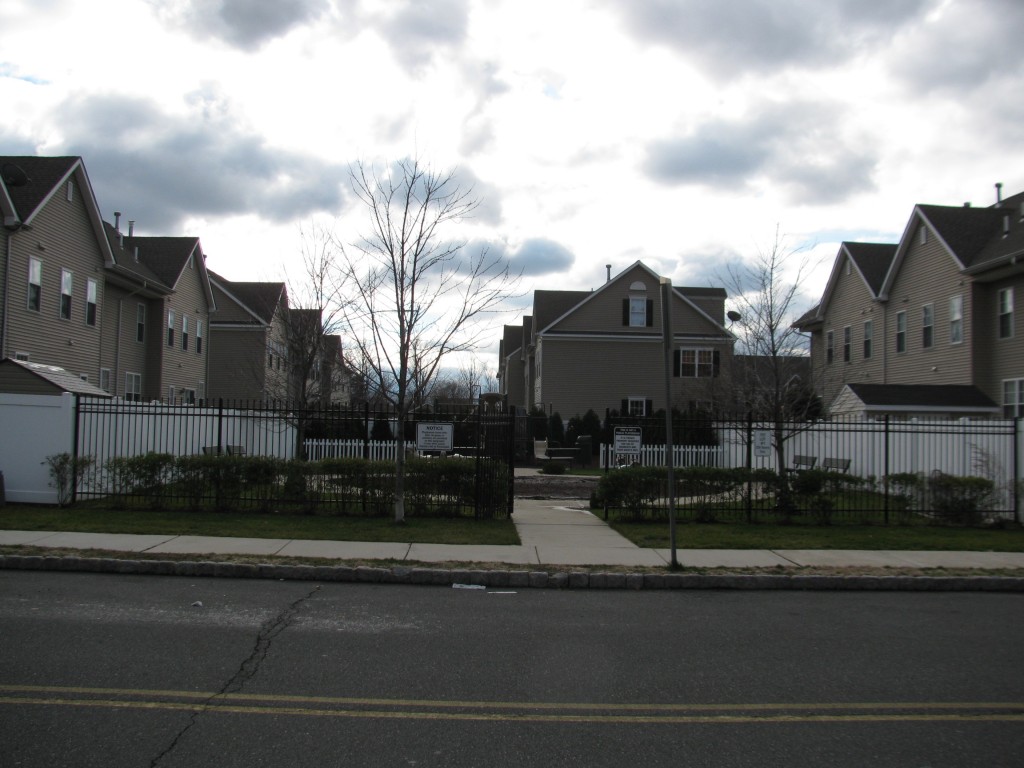 A small playground in the Reserve. Provision of this amenity was probably mandated in order for this whole development to get built. 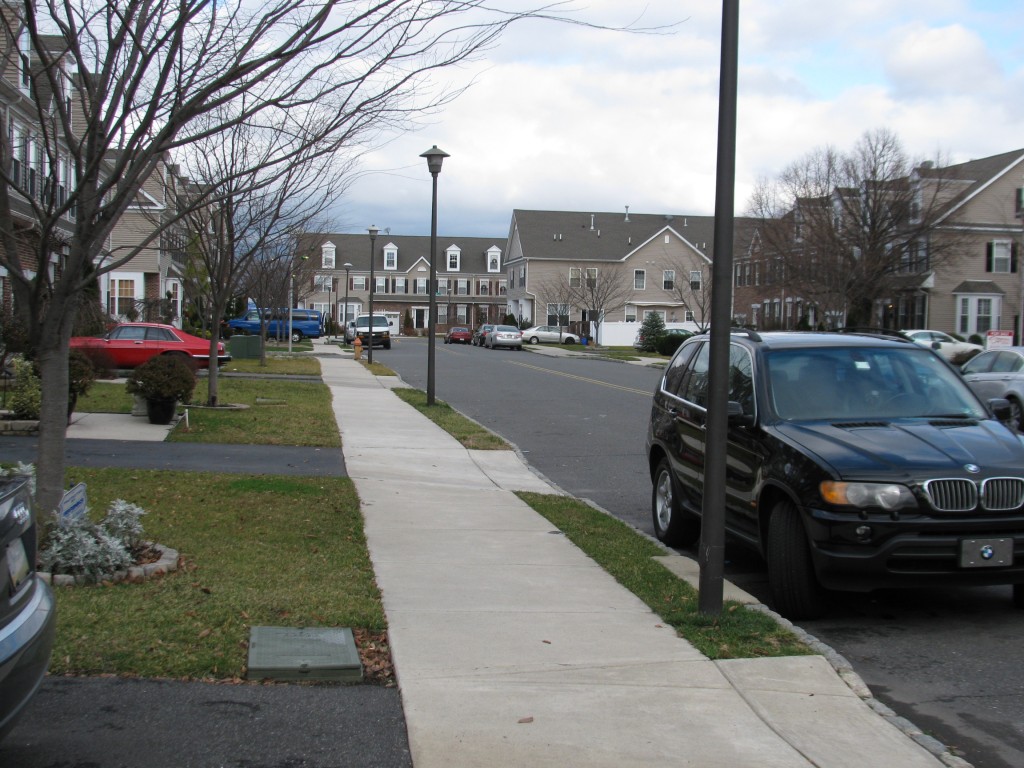 Most of the Reserve looks like this streetscape. Like the Capri development, these are large but cheaply-built houses on excessive amounts of green space with dominant garages. Capri and the Reserve are an exemplar of the utterly anti-urban exurban way of building–even when done at medium densities and in urban environments. 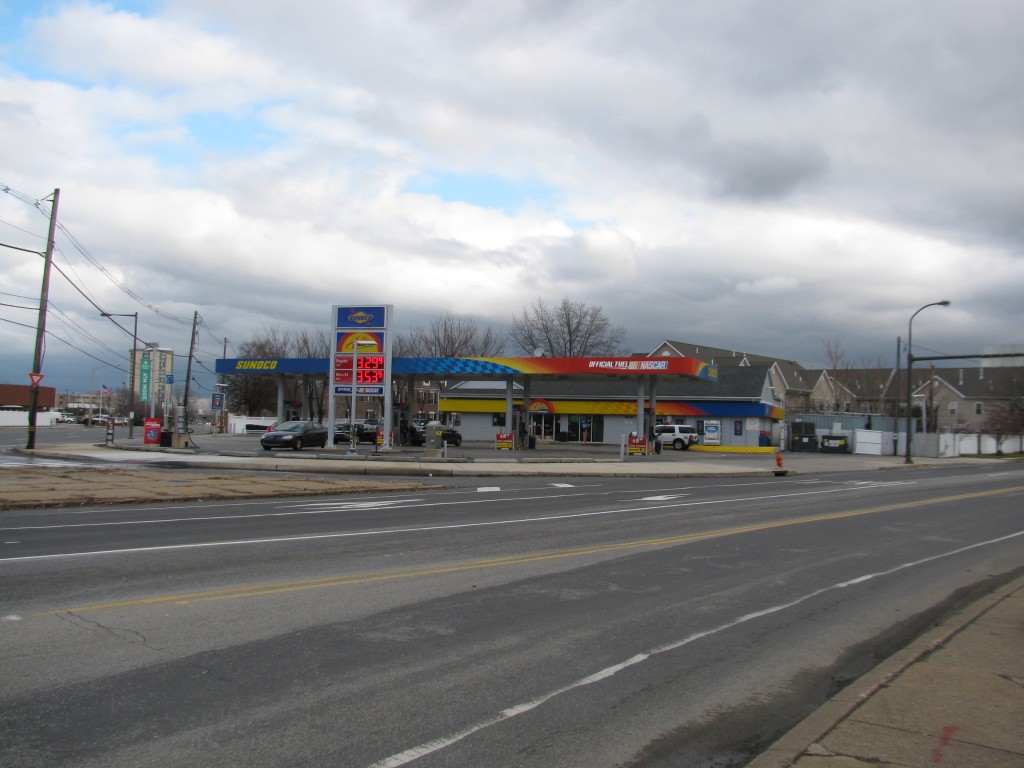 The Reserve, as seen from the corner of Pattison and Penrose. Notice how the only thing that distinguishes this corner from many suburban corners is the presence of sidewalks.

Gas was cheap when I took this photos. 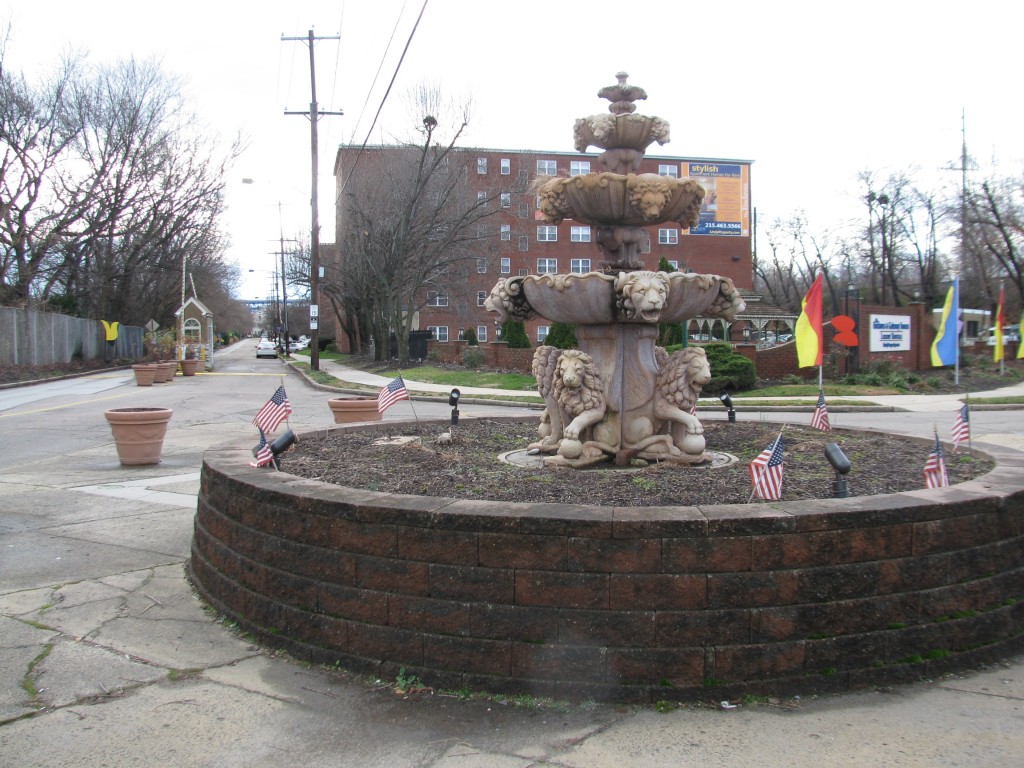 A series of large apartment buildings trickle south of Pattison, between the west side of FDR Park and the freight line to Packer Terminal. These buildings are unusually high-density, but unfortunately (and unsurprisingly) gated. 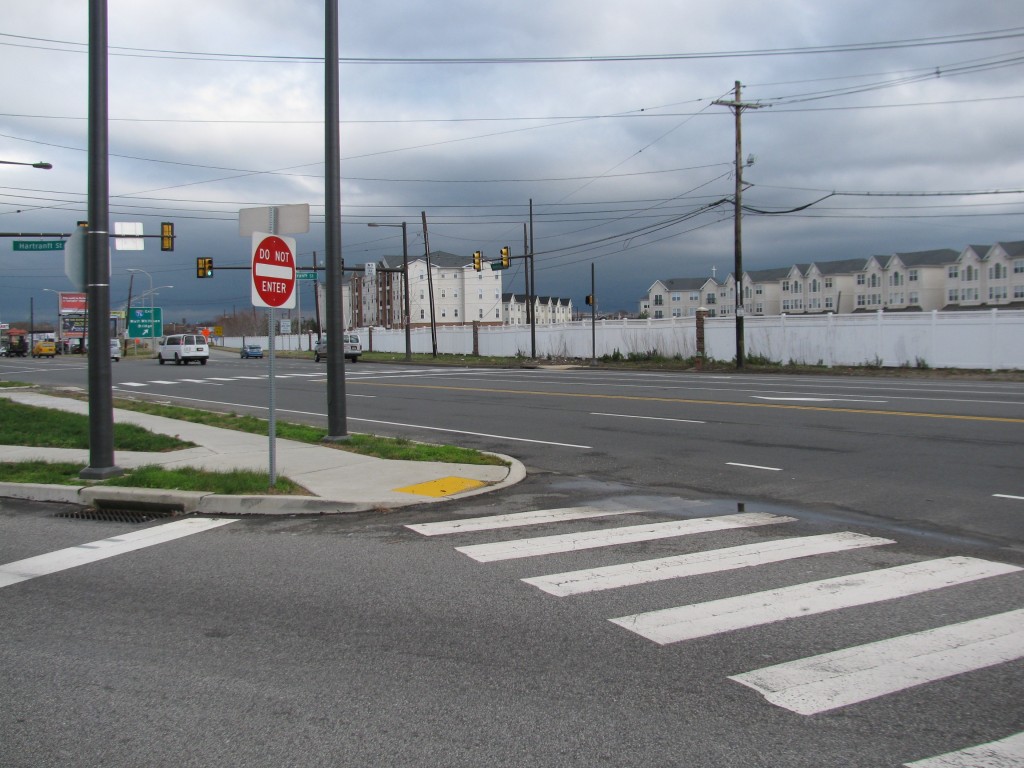 Look upon the traffic engineers’ works, ye mighty, and despair! Penrose Avenue is a whopping 80 feet wide, with no fewer than four through lanes, a center turning lane, two (disused) bike lane shoulders, yet lacking a consistent sidewalk. Lots of people drive there, after all, and it’s hardly like there’s any destination there to walk to. Nosiree, none at all. 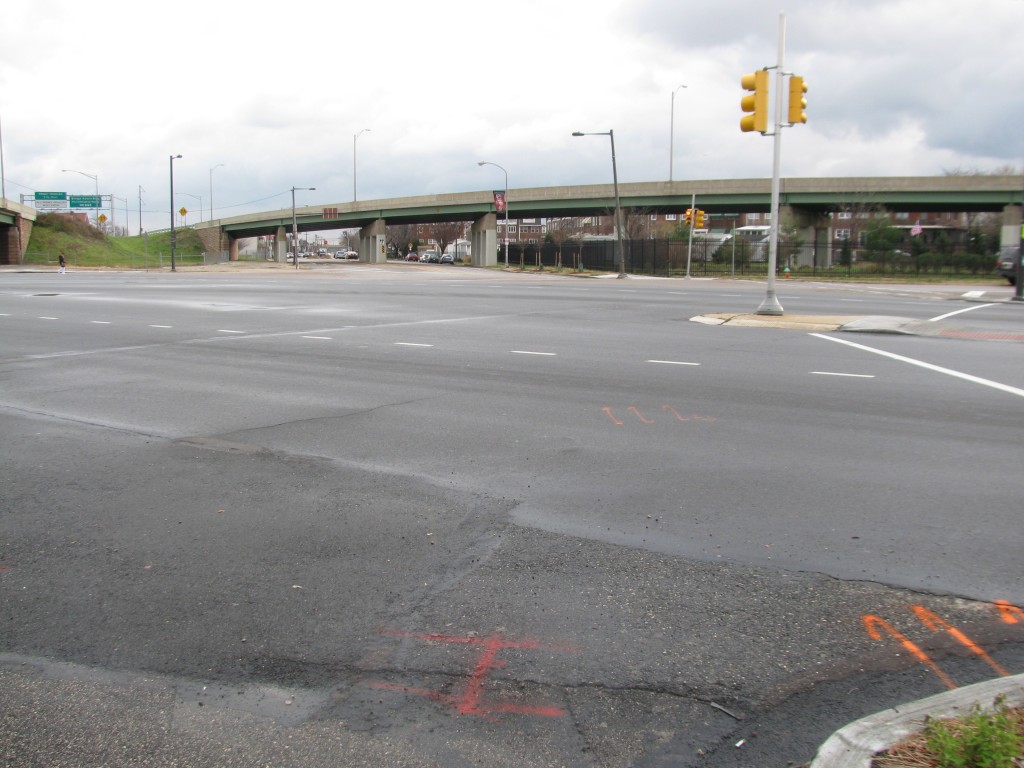 This is the corner of Packer, Penrose, and Moyamensing Avenues. A vast sea of asphalt intimidates the pedestrian, but gives lots of room to maneuver for cars. Like all of Penrose, this stretch is excessively autocentric, in a manner a blogger has recently taken to calling “stroads“. After all–there’s nothing worth going to here, is there? 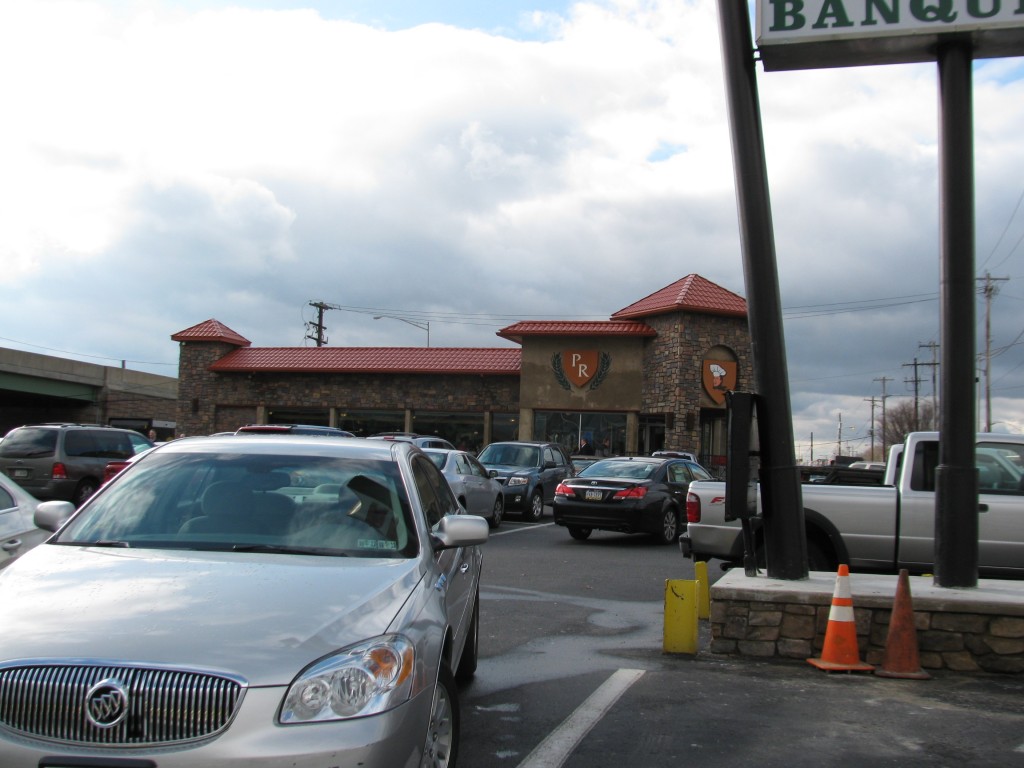 According to traffic engineers, this place doesn’t exist–or, at least, isn’t worth walking to. 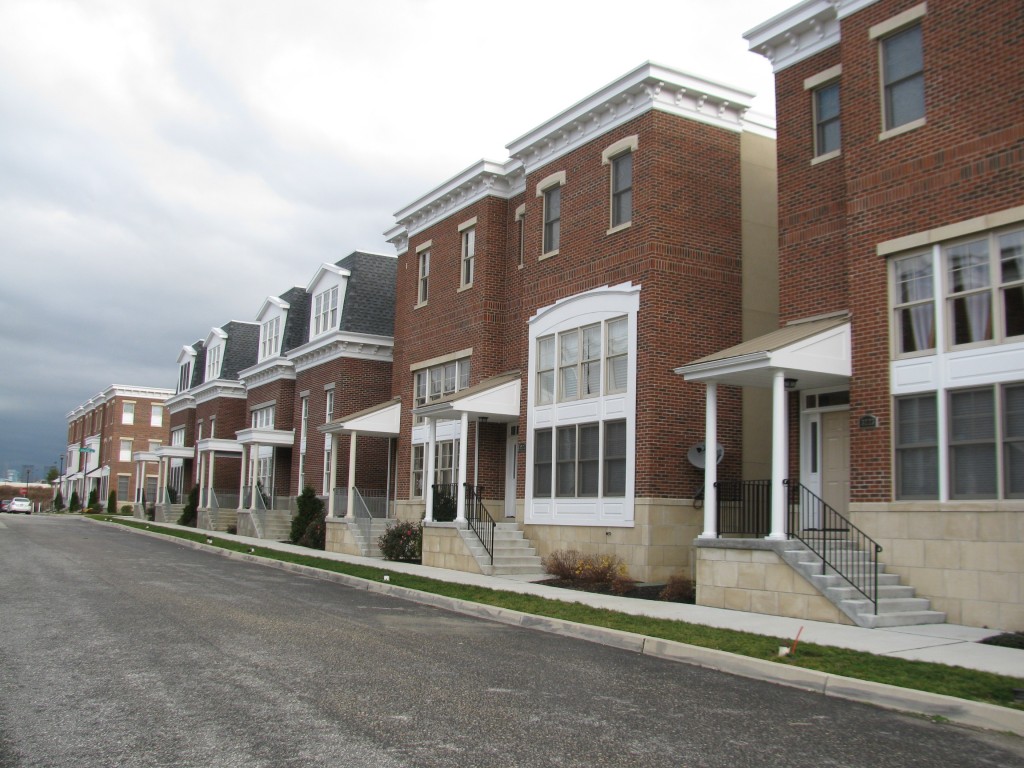 Siena Place is the newest development in this part of the city. More New Urbanist than the Reserve, it actually features a grid these oversized twins adhere to. Still under construction, most of the space is still grass and turned dirt. 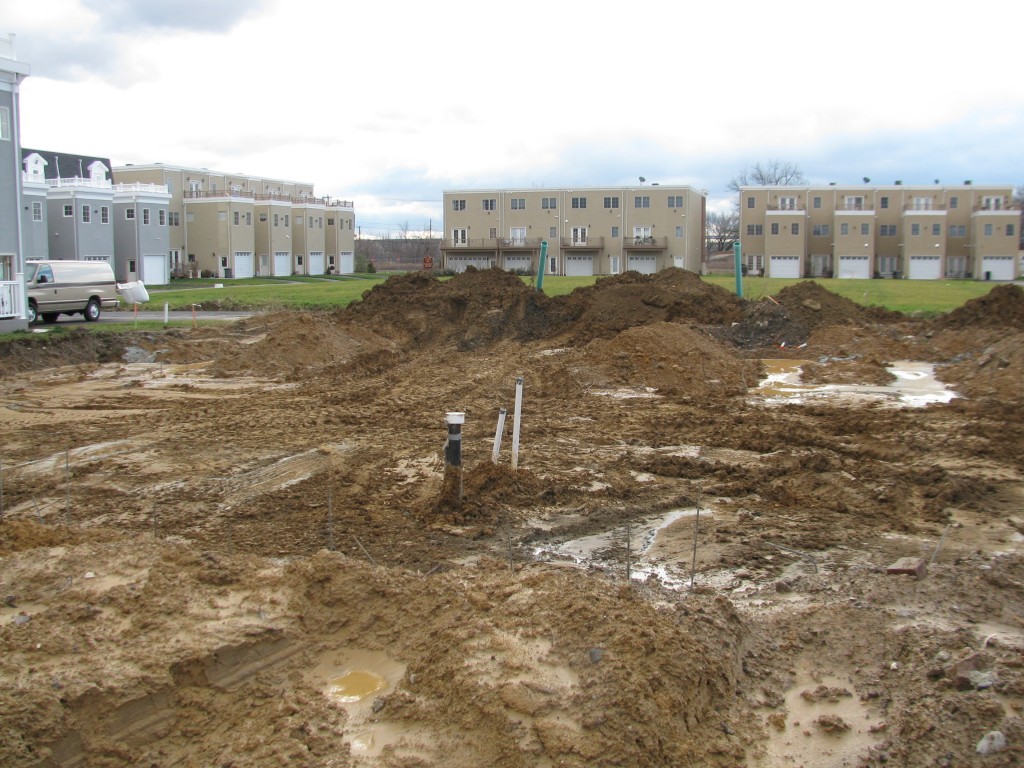 An under-construction section of Siena Place. 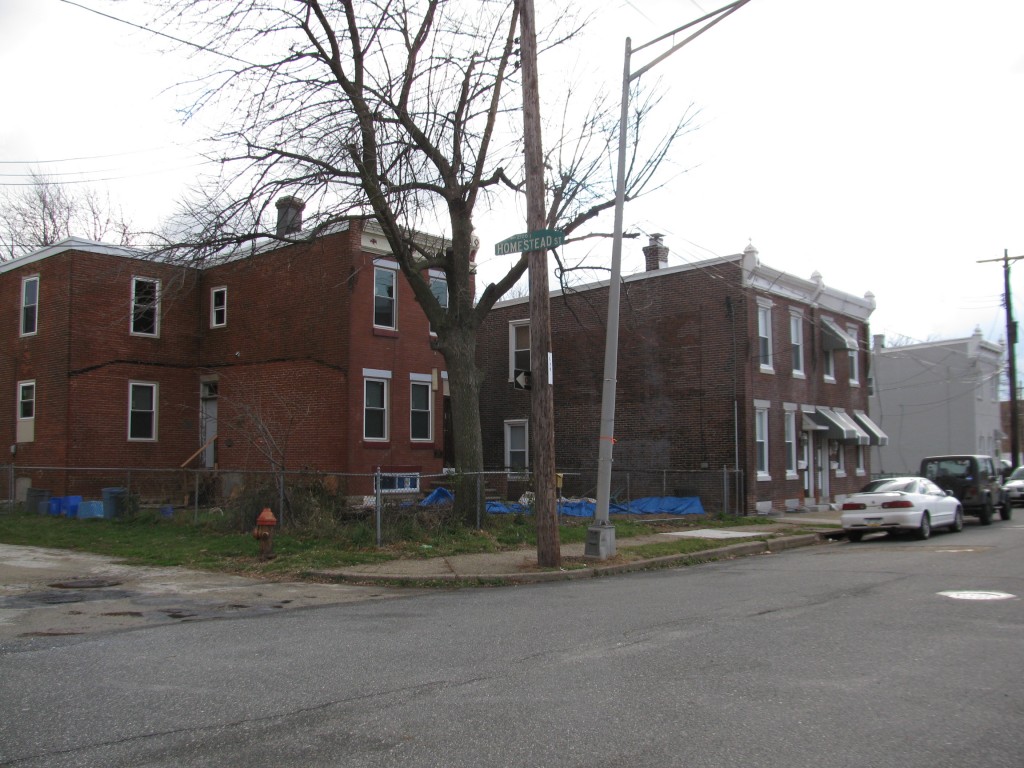 Along Homestead, west of Penrose, squeezed between the Reserve and Siena Place, we find this relic of a neighborhood growing in the 1920s but whose later growth has been stunted. This is a fossilization of spontaneous urbanization that characterized city growth prior to the Great Depression. 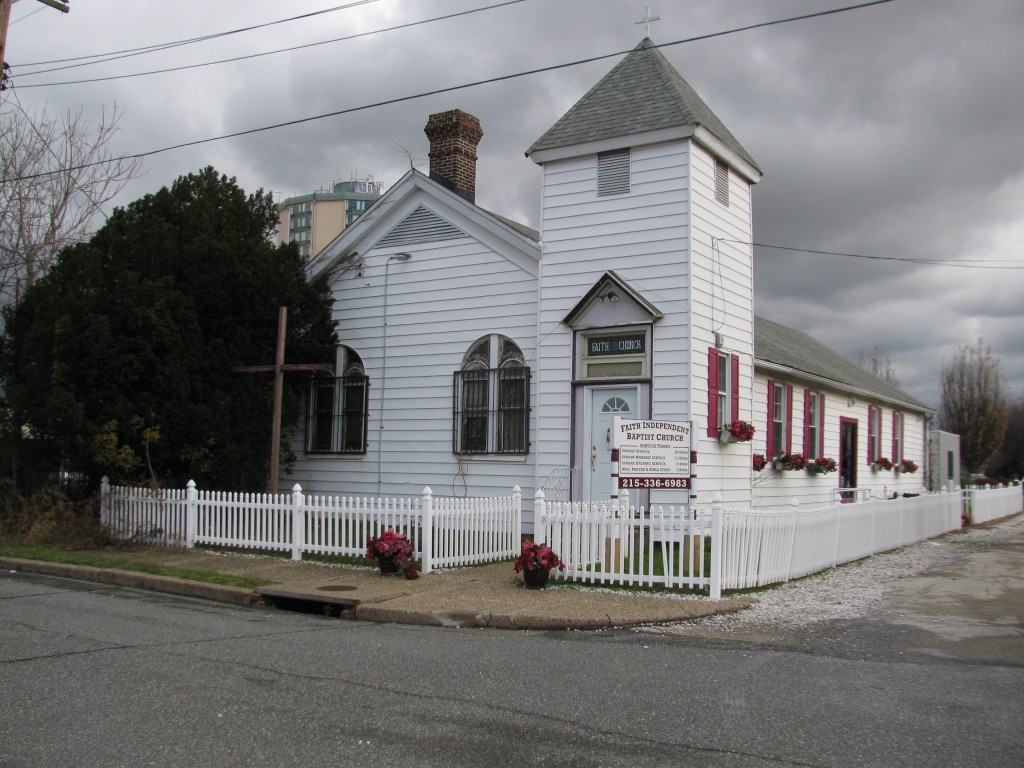 This church must have been the center of this neighborhood along Homestead, a relic that has somehow survived the better part of a century of subdividing the city into house-farm monocultures.

The Planning Commission calls these neighborhoods “strong medium-density neighborhoods.” They are places that grew during the second half of the 20th century, picking up where neighborhoods like Wissahickon left off.