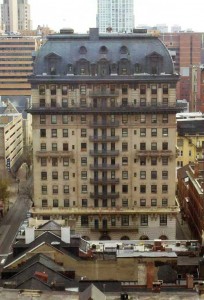 They sure don’t make ’em like this anymore. Look how beautiful this little building is, even after being mangled up by countless alterations and tarnished by neglect. This is the structure that put Horace Trumbauer on the highrise map. Once one of the most prominent buildings in the city, this masterpiece has fallen into obscurity.

The concept of a luxury highrise apartment house was pretty new to Philadelphia in the late 1800’s. At the time, downtown apartment living was reserved for scallywags and ne’er-do-wells. Never before had there been a need to house the city’s wealthiest go-getters in anything other than an opulent mansion. The first luxury highrise built to support this new population of monied young urbanites was the Gladstone (now the site of Kahn Park) in 1890.

In 1900, a plan was made to build a new luxury apartment house in what was one of the nicest parts of town, 13th and Walnut. The new highrise would be close to the city’s finest libraries (Locust Street a block away was known as “Library Row” back then), best social clubs (Philadelphia Club, New Century Club, Manufacturer’s Club), the new business district (Broad Street), and the new City Hall.

The new fancy-shmancy megapartment would be known as the Saint James Apartment House, presumably because Saint James Street is nearby. This has always bothered me. The small street that runs behind the building is Chancellor Street (and had been just been named that). Why not just call it the Chancellor Apartment House? The building that would end up with that name would not yet be built for another 20 years. Why go with Saint James?

The issue is even stickier when you realize that there already was a building called the Saint James, constructed 50 years earlier. Anyway, which Saint James? There are six saints named James. Is it Saint James the Greater, the apostle resurrected in 844 to fight in the Crusades, or Saint James Intercisus, who was still preaching after his arms and legs were cut off? 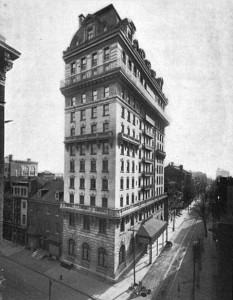 The St. James in 1902, brand spanking new. Notice how the roof wraps around the back. | Source: Architectural Record, Volume 15

The architect secured for this bold project was the Illustrious Admiral of Philadelphia Architecture, Horace Trumbauer. Trumbauer had previously designed large mansions and estates… this would be his first apartment building. He put together a design for a 12-story Second Empire luxury castle that employed a fireproof steel frame and a look that was visually similar to the new City Hall. The budget was $1 million dollars, an astronomical sum for a building at the time.

Since it was for the ritzy-titzy set, this building could would have to be furnished with the finest EVERYTHING. It had a silver plates and clocks from Strawbridge’s jewelry department and was billed as the first all-steel skyscraper in the city. Chancellor Street was furnished with special plumbing and electrical wiring meant just for the Saint James.

Construction took place in 1901. Once complete, it became so popular that only three years later, it was doubled in size. Others who have written about this building make a point of saying that the building’s design was stifled by the addition, and I used to think that’s was a bunch of fracocta baloney. The addition is pretty seamless (except for a noticeable line down the middle) and looks like its always been there. This is no 1500 Walnut. Then I found a picture of the Philly skyline from 1901-03. Before the addition, that cool roof wrapped all the way around the building. After the addition, the rear of the building became a boring blank wall. Now I understand. 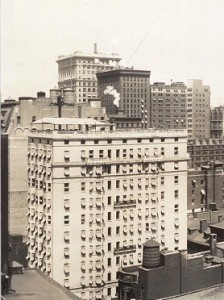 The Annex in 1913. I guess it sort of matches the original.

The neighborhood didn’t stay nice for much longer after the building opened. After only a short period of time, the kind of tenant that was into the idea of a luxury apartment moved on to bigger and better buildings in nicer parts of the city. The St. James Apartment House then became the St. James Hotel. The hotel was exclusive and luxurious, and some of the tenants from the apartment times stuck around up into the 1920’s. Many famous Philadelphia families from the Gilded Age were guests of the hotel, and the hotel’s restaurant, the St. James Hotel Grill, was a famous watering hole for the elite that stayed open into the 1950’s.

In 1910, the highly successful hotel was ready for another expansion. This time, they didn’t add on to the building… they gave it a brother. The St. James Hotel Annex was built at 1216 Walnut Street, only a few doors down from the original. This building also offered fully-furnished apartments in addition to hotel rooms. I still stands, converted to apartments in 1984.

As the decades passed, the Hotel became less and less popular. In the 1920s, the hotel ran their last national advertising campaign. In the 1930s, the owners began to rent the hotel’s ballroom, once a premiere convention and meeting hall, as quasi-office space. In 1937, the Showman’s Club of Philadelphia claimed the space as their headquarters. On Christmas of 1946, WJMJ, a religious radio station (JMJ: Jesus Mary Joseph) started broadcasting from there. 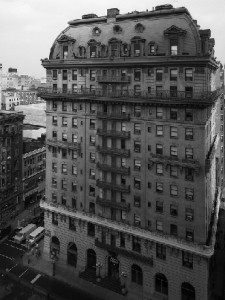 As the St. James House in the 1980's. | Image: The Athenaeum of Philadelphia

Despite losing its popularity, the St. James tried to stay in the loop. On August 15th, 1938, it became the first hotel in the city to have air conditioned rooms. The building continued as a working hotel, albeit a pretty crappy one, up into the late 1960s. In 1976, the building was placed on the National Register of Historic Places and in the early 1980s, it was (badly) rehabbed into apartments and renamed St. James House.

In 1993, the St. James was purchased by Philadelphia Management Corporation and renamed Walnut Square Apartments. Some 19 years later, the Trumbauer’s siren is in a sorry state. The roof leaks down to the tenth floor, the elevators and water system constantly break down, and the exterior looks like butt. The Saint James is in need of a makeover.