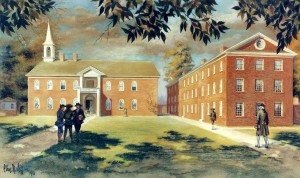 In winter, 1757, around the same time of the city’s first public concert, students at the College of Philadelphia–to become the University of Pennsylvania–performed the first “serious” work of opera in America.

The College at this time was housed in a large building at the southwest corner of 4th and Arch Streets. The building had been constructed in 1740 as a church for the followers of noted Evangelist George Whitefield. In 1750 it was purchased by the Trustees of the Academy and Charitable School of Philadelphia, a group founded by Benjamin Franklin to establish an institution of higher learning and a school for the poor in the city. Classes began in 1751 under the direction of Provost William Smith. In 1755 the institution became the College of Philadelphia and then later the University of Pennsylvania.

Smith’s curriculum included training in oratory. As part of this training, the College presented dramatic vocal productions designed to serve as “oratorical exercises” for the students. The first of these productions was offered to the public over several nights in late January and early February 1757, 255 years ago. The performance featured Smith’s adaptation of the vocal work the Masque of Alfred by English composer Thomas Arne. 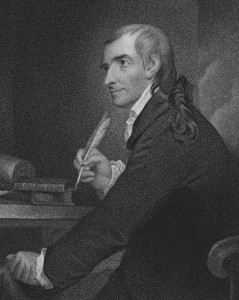 The masque was a form of English court entertainment that was a precursor to serious opera. The most popular form of musical theater in America at that time was the ballad opera, which, despite its name, was not opera as we know it today, but a lighthearted entertainment that was essentially a play with inserted songs. The “Masque of Alfred” as presented by the College of Philadelphia students in early 1757 was something different, something new in America: a dramatic production that integrated acting, music, scenery, and costumes. As such it was the first American presentation of a “serious” opera.

One of the participating musicians was a young student at the College, Francis Hopkinson, who probably also composed some music for the production. Hopkinson was part of the first graduating class of the College in 1757 and would go on to become a trustee of the College as well as one of our nation’s Founding Fathers and a Signer of the Declaration of Independence. He was also America’s first native-born poet-composer and a key figure in Philadelphia’s musical life in the late eighteenth century.

A newspaper review of the “Masque of Alfred” performance noted,
With Regard to the young Gentlemen who so lately entertained the Town with this Performance, the Applause they met with, from Crowded and Discerning Audiences, during the several Nights of its Representation, is the best proof of their Merit … to see a number of young proficients in music and oratory, capable of presenting to advantage, in all the complexity of its parts, so difficult and beautiful a performance as that of Alfred, would be an honor to the taste and improvement of any country.

The University of Pennsylvania grew and expanded and eventually moved to 9th and Chestnut Streets and then to its present location in West Philadelphia. Its original 4th and Arch Street site is now occupied by a Holiday Inn. Adjoining the Holiday Inn to the west is Christ Church Burial Ground, where both Francis Hopkinson and Benjamin Franklin lie in repose, just yards from the original home of the University in which they played a prominent role and which gave America its first opera performance.