On The Day To Honor Abe (And George), We Present You Log Cabins 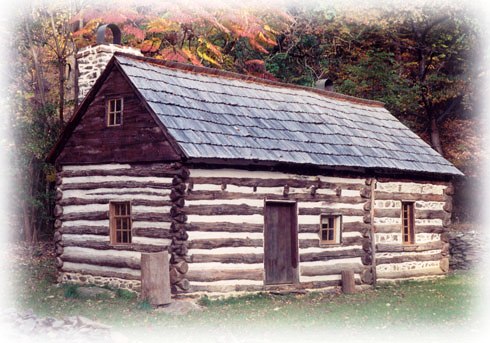 In America, a boy born in a one-room log cabin at the edge of the woods can become President. A pair of centuries ago, this very notion would stun the Western World.

And so today, President’s Day, in recognition of Abe Lincoln, born on February 12, 1809 in a log cabin on a farm fifty miles south of Louisville, Kentucky, we honor this symbol of simplicity and egalitarian democracy.

The American log cabin, indeed, was born here in the colony of New Sweden. 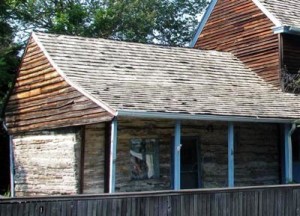 Sweden’s only colony in America stretched along the banks of the Delaware River, from Cape Henlopen to the falls at present-day Trenton. The pioneering Swedes built forts along the Delaware for protection and to establish their claims. They cultivated the land, planted orchards, and hunted and traded with the Lenni-Lenape. They built school houses, mills and breweries, established courts of law, and raised the first churches in the area, some of which are still used for regular worship. In doing all this, the Swedes used the abundant timber found everywhere and introduced the log cabin to America.

The C.A. Nothnagle Log House in Gibbstown, New Jersey, may be oldest surviving log house in the Western Hemisphere and may be the oldest standing wooden structure in North America. Although the exact age of the building is unknown, it is believed to have been built by early Finnish-Swedish settlers of New Sweden around 1638. The method of using logs from land clearing to build a homestead was adapted by subsequent American pioneers as they moved west across the continent. 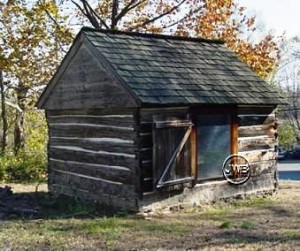 The Lower Swedish Log Cabin is the only remaining cabin of several built along Darby Creek during the New Sweden era. We find the building’s Scandinavian roots in the use of round logs with bark left on, weight-bearing corners anchored on existing boulders, and interior corner fireplaces. Restored in 1987 by the Friends of the Swedish Cabin, it was used by early Philadelphia filmmaker Siegmund Lubin as the site for several pre-1910 motion pictures.

The Mortenson-Schorn Log Cabin in Swedesboro, NJ, was built by Morton Mortenson. He arrived in the New World in 1654 and was the grandfather of John Morton, a Pennsylvania signer of the Declaration of Independence. The privately-owned structure consists of one small room with no windows and a single door. It was moved to its present location on Trinity Episcopal Church’s property in 1989. 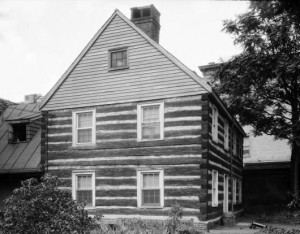 A large log cabin, now used as a residence, is on the grounds of Stenton, the house museum at 4610 North 18th Street in lower Germantown. (Stenton was the colonial mansion of James Logan, William Penn’s secretary and agent.) The cabin was originally built as a dwelling for a Quaker family perhaps as early as 1755-56 in what was to eventually become the southwest corner of 16th and Race Streets in Center City Philadelphia. In 1817, the Society of Friends purchased the city block from 16th to 17th Streets and Race to Cherry Streets for use as a Quaker burial ground. The 2-story cabin was part of the transaction. Friends Select School was later founded (1886) on the site of the cemetery (though it traces its history back to 1689) –the graves having been removed–and the log cabin remained. It lasted as part of the campus for over eighty years, but when Friends Select undertook an expansion in the late-1960s, the cabin was moved to the Stenton Park on January 26, 1969. 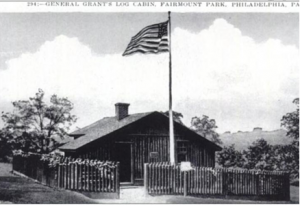 Grant’s Cabin. This image, by P. Sanders, is from around 1925 and appears in Philadelphia’s Fairmount Park (2005), by James D. Ristine.

There are, of course, several replica log cabins at Valley Forge. More interesting, however, is the story of the cabin of General Ulysses S. Grant, which was located in Fairmount Park for decades. This cabin served as Grant’s wartime headquarters while he was at City Point, Virginia, during the closing days of the Civil War. It was from this place that Grant planned and organized the Siege of Petersburg, which ultimately helped bring about the end of the Civil War in Virginia. President Lincoln, Grant, and other military leaders met there to discuss how to reunify the country when the war was over. In 1865, Grant agreed to present the cabin as a gift to the citizens of Philadelphia in recognition of their loyal support during the war. Grant’s Cabin was erected south of the Girard Avenue Bridge, across from the Sedgeley Guard House. It stood as a major tourist attraction in Fairmount Park for many years. But as interest in the Civil War waned, the cabin faced neglect. In 1983, the Fairmount Park Commission gave it to the National Park Service, which reconstructed the cabin on its original site at Appomattox Manor. 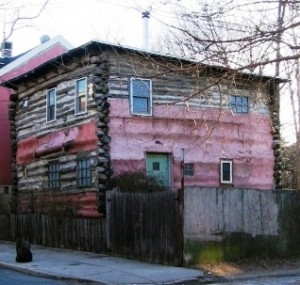 A two-story log cabin stands on the 800 block of Lawrence Street, near Poplar Street. It was built around 1986 with a truckload of logs from West Virginia by artist Jeff Thomas, his inspiration being the “back to the land” movement of the 1970s. Apparently the only log cabin in Philadelphia today, it stands as a testimonial to the artists and urban pioneers who moved to Northern Liberties from the 1970s to the 1990s.