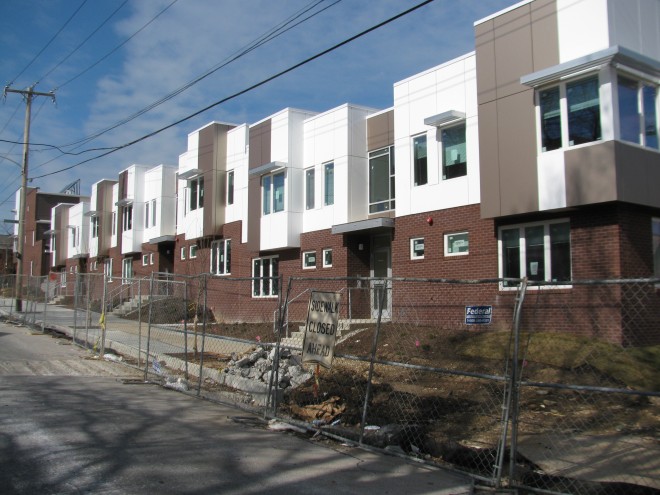 Wrapping up major construction, and soon to be rented, are the LEED certified Norris Apartments, a low-slung townhouse-and-apartment public housing complex replacing a dreary tower-in-a-park that loomed over the northeast corner of Temple University for the longest time. (See Naked Philly’s report HERE and Plan Philly’s HERE.) 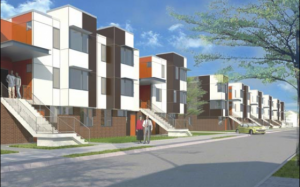 On the outside, this ambitious project, designed by Blackney Hayes, is akin to other new examples of highly progressive architecture like Sheridan St., the forthcoming Paseo Verde, and the work of Onion Flats and others in Northern Liberties, Fishtown, and East Kensington. Contrasting with the barracks-like 1960s-era garden apartments of the rest of the complex, and with the Brutalist and otherwise high modernist Temple University, the new development offers a vision: the city that could be. 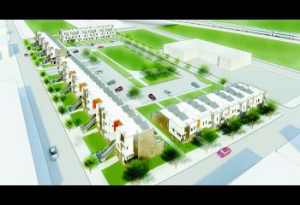 Yet the project’s design undermines key values of green architecture and good urbanism. Market Urbanism’s Steve Smith, then writing at Forbes, points out (correctly) that there is an excessive amount of parking behind the paneled façades–far more parking than found elsewhere in the neighborhood, and far more than will ever be used, particularly given this site’s extraordinary proximity to public transit. (By providing excessive parking here, one public agency–PHA–is undermining another–SEPTA. This is not only poor green design, it’s terrible public policy.) Endemic across PHA projects (and subsidized housing in general), this overabundance of parking can be found in the frankly atrocious Southwark Homes at Fourth and Christian and even in the handsome MLK redesign at 12th and Fitzwater. 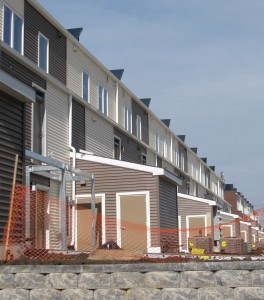 Vinyl siding on the back of the buildings | Photo: Stephen Stofka

Under the hood, we find these homes are really just the same product as MLK, just with façades that incorporate contemporary materials. Where nobody’s looking, vinyl or aluminum has been applied. How, exactly, is that green? The solar panels are a nice touch but the flat roofs will eventually leak. A gabled roof would have added precious space (an attic) while better directing rainwater flow. The vestigial front yards are congruent with the rest of the Norris Apartments–the older, garden-barracks project–but out of step with most housing in North Philly, which comes right up to the building line save in the most regal cases.

To call this project green is, well, a bit of greenwashing.

The main failure, which emerges from the still evolving reaction to failed public housing towers of the 1960s, is lack of density. Indeed, we can see this project as a transition from the assiduously suburban projects that went up in North Philadelphia in the last two decades toward something a bit more urban. That reaction was well-founded: high-density low-income projects were actively destructive–MLK was an excellent case in point. But as PHA intentionally mixes people of various income levels in its new developments, it’s time to shed the notion that low density is the answer. In fact, the problem with Norris is that there are too few dwellings and too much parking. 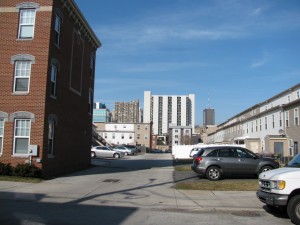 The Alder Street frontage is a huge missed opportunity to provide more units–and considering the waiting list, why are parking spots valued over units?–and instead of using the gap along the 11th Street frontage to access the carport behind, why not make it an extension of Fountain St.? That way, instead of one giant block dominated by parking and a “pocket park” totally hidden from the street, we could have two blocks of rowhomes ringing small, but pleasant, shared backyard spaces.

Yes, the MLK redevelopment was a great leap forward for PHA, and the new Norris apartments are much better at relating to the street than the barracks and battery cages that came before. But it’s time, yet again, to innovate on public housing design. If we want to talk green architecture we have to think truly urban and design for density, mixed uses, and proximity to public transit.