A Metalworking Tradition Forges On

Editor’s Note: We recently visited with metalworker Jason Roberts, whose 8,000 square foot shop occupies the former Yale & Towne Foundry a couple blocks from Globe Dye Works, in Frankford. After Yale & Towne, a manufacturer of locks and later forklifts, moved to a new plant on Roosevelt Blvd. in 1948, the building was bought by John Komada & Company. The family-owned wireworks firm, which specialized in custom commercial displays, closed in 2009. Roberts keeps a huge inventory of machines –both old and new– in his shop, a true collection of Philadelphia industrial history.

Founded in 2008, Roberts’ company produces high-end metalwork including ornamental, architectural, interior and exterior furnishings, and sculpture. With a degree in fine metals from Kutztown University of Pennsylvania, Jason traveled around the country to refine his craft, working in shops located in Illinois, Georgia, and North Carolina. 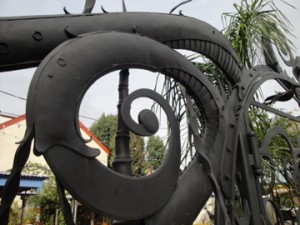 Jennifer Leibert: How did you end up in Philadelphia?
Jason Roberts: I came to Philadelphia because I am originally from outside of the city and love Southeastern Pennsylvania. I was familiar with the region and had friends and family located here. Plus, Philadelphia, being an east coast city that is affordable and growing in population meant a market I could pursue.

JL: And you found a remarkable building.
JR: I outgrew my previous shop, which was rented, and having as much equipment as I do, moving is a great expense, therefore, I started to look for buildings I could purchase. This building has remarkable space and suited my budget.

JL: Are you inspired by the history of the foundry?
JR: I was very interested in the history of the building because as a craftsman, I like to look into the past and learn from it. It is important to me to build upon that. I am also very excited to be the next chapter in this building’s history as an industrial property, whereas so many buildings like this are turning into lofts or several artist spaces. I consider myself apart of industry.

JL: In Philadelphia tradition, you must work with other craftspeople in the neighborhood?
JR: Erector Sets, Carter Studios, as well as developers such as Globe Dye Works.

JL: What do you think about Frankford?
JR: I am right on the border of Bridesburg and Frankford, but it depends on who you ask. It is in a nice neighborhood, close to suppliers and I-95, making it a quick trip to Center City Philadelphia.

JL: You intend to expand in the space and do some other interesting thing here.
JR: I hope to grow my business, utilize the large roof square footage for solar panels and green space and build a better office.