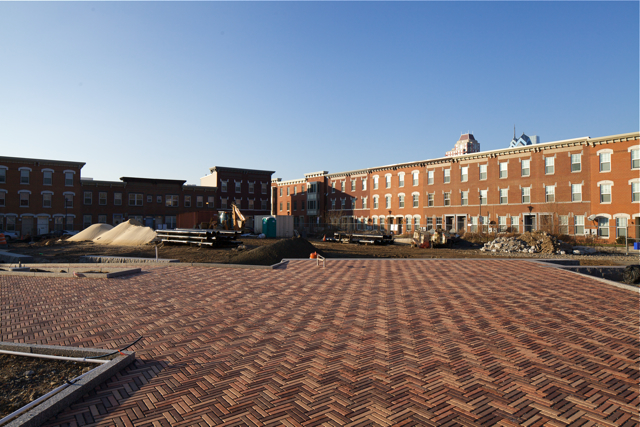 Every morning, Pat Bullard, president of the board of the Hawthorne Empowerment Coalition (HEC), catches the 23 bus at the corner of 12th and Catharine Streets in the Hawthorne neighborhood of South Philadelphia. She waits by a new set of steps that leads to span of dirt, construction vehicles, and a half-finished arched path cutting through the block. If Pat faces the stairs, she can look past the dirt and rubble of the vacant lot and see the Philadelphia skyline.

But come this spring she won’t need to, for the arched path and the rest of Hawthorne Community Park, the last phase of the remake of the Martin Luther King housing project, will be finished. Pat and her neighbors are terribly excited–and they have every reason to be. 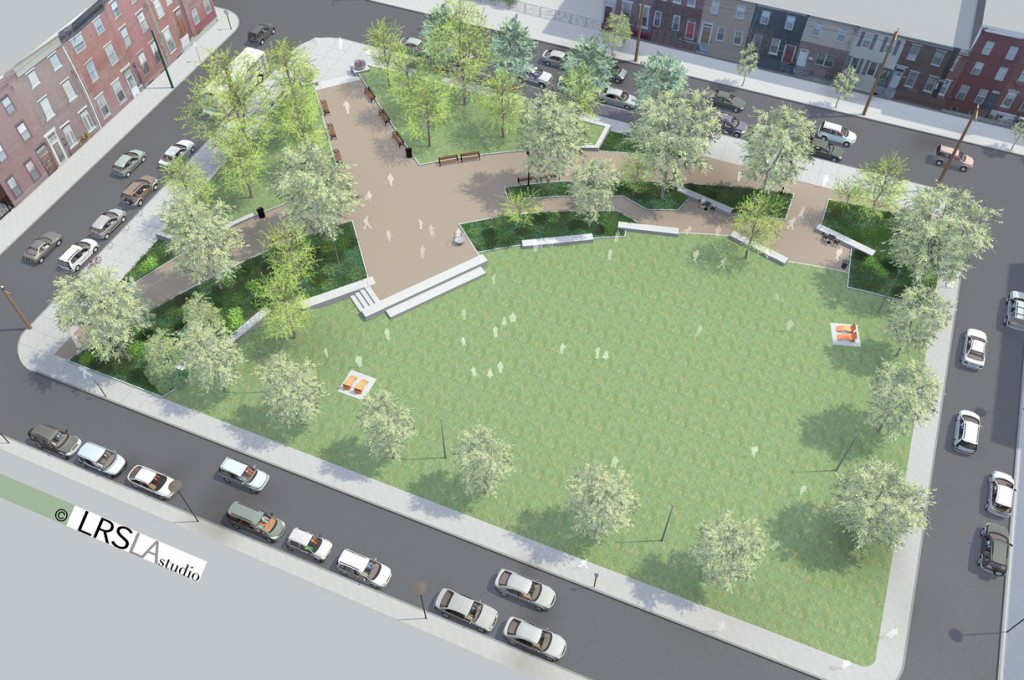 The design of Hawthorne Park, by Lager Raabe Skafte Landscape Architects (LSRLAStudio), is a direct response to community needs. A large open lawn, taking up slightly over 50% of the park, will allow for community events, such as movie screenings and Halloween parties. Residents also saw the need for public meeting space, obliged by benches tucked neatly into corners under overhanging trees. There will be a bi-directional stage where performers and audiences can switch from stage to lawn. On the stage itself will be a piece of functional artwork, a brass podium “Object of Expression” by artist Warren Holzman, crafted as a tribute to the speech given by Martin Luther King in 1965 at the now demolished Hawthorne Community And Recreation Center (HCARC), at 13th and Fitzwater.

The original Hawthorne Square housing project–four towers and the HCARC built by the Philadelphia Housing Authority in 1960–was renamed for King in 1970, commemorating the 1965 visit. 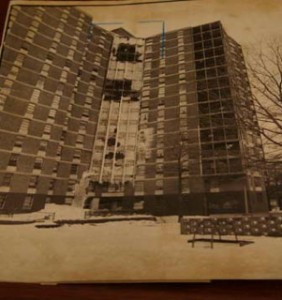 A high concentration of poverty exacerbated by the physical and social isolation of the towers from the rest of the neighborhood led to it becoming, in the 1980s and 1990s, one of Philadelphia’s most crime-ridden spots. Sociologist Elijah Anderson draws closely from Hawthorne in his 1999 book Code of the Street: Decency, Violence, and the Moral Life of the Inner City.

By 1999, two-hundred of the 576 public housing units were vacant and many unlivable. The demolition of the MLK towers that year was followed by a prolonged stalemate among the US Department of Housing and Urban Development (HUD), PHA, the affordable housing developer Penrose Properties, and the non-profit Universal Company Homes CDC (owned by Kenny Gamble, South Philadelphia native and R&B producer) over ownership and direction of the development. Eventually an agreement was reached in which Gamble received the land with federal HOPE VI funding. Torti Gallas and Partners were named architects.

According to thesis research by Nathasha Mooney at the University of Pennsylvania, by 2007, 245 new units were built, 95 of them owner-occupied.

But the long-anticipated park has its own history of conflict and delay. These tensions mirror citywide and nationwide issues of equity, design, and sustainability in urban planning–indeed, we can see the shifting values of the city through Hawthorne Park–and they reveal a set of tensions inherent in community development.

Since the early stages of development, the Northwest block of 12th and Catharine has been marked for open public space. But as MLK’s housing construction continued through the boom, rising real estate values caused PHA to consider using the space for market-rate housing. Plans for the park came to a halt.

“The community is becoming too dense with housing,” Bullard told SouthPhillyReview.com in response to the reversal. “We’re going to be stacked on each other like sardines. We need some open space.”

Bullard helped organize the response and residents rallied to save their future park. “I attended every meeting to show that we were serious about wanting that park built,” said Bullard. The neighbors eventually won the campaign to “save Hawthorne Park” and construction began last year.

Christopher Dougherty, a planning and development specialist who assists with the project for the city’s Department of Parks and Recreation, says the project benefits from strong support from different organizations and unique collaboration among residents, the Hawthorne Empowerment Coalition, PHA (site owner), Pennsylvania Horticultural Society (PHS), the Philadelphia Water Department, Philadelphia Parks and Recreation (site lessor), and funders–among them the William Penn Foundation ($250,000), the Pew Charitable Trusts ($250,000 for design), the city ($250,000 through former Councilman Frank DiCicco’s office), the state Department of Community and Economic Development ($300,000 arranged by state representative Babette Josephs), and the state Department of Conservation and Natural Resources ($1.05 million for construction). 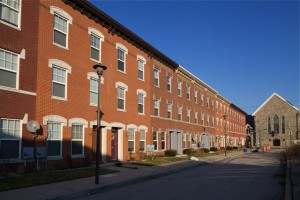 The park’s form and its functional design effectively translates the ideology behind the MLK redevelopment. While the principal goal of the redevelopment was to break up the concentration of poverty, the design was also an attempt to integrate the public housing units into the natural fabric of the neighborhood. TGP’s plan put forward New Urbanist principals of traditional design, street presence, and human scale. They pulled heavily on the traditional Philadelphia vernacular of the stoop and varied building heights in order to create a sense of organic neighborhood evolution.

“TGP built the houses at various heights and in different colors to give the feel of piecemeal building, which is how the rest of Hawthorne looks, since most lots were developed one or two at a time,” explains Mooney.

Moreover, TGP proactively designed houses to face the park to create “eyes on the street” and a resident surveillance system of sorts. Landscape architects LRSLA Studio complements TGP’s design by creating an open, visible, and inviting space. Vegetation is low and the trees, according to Dougherty, “were selected to create a ‘window’ into the park.” LRSLAStudio and residents agreed that 24-7 lighting was necessary.

Hawthorne Park’s plan is deceivingly simple in its design. Not only did LRSLA Studio take the community’s physical and cultural needs into consideration, but their plan also meets the requirements of Philadelphia’s multiple green initiatives.

The park is a small piece of the city’s Green2015 plan to transform 500 acres of vacant or underutilized city land into public green space.  Dougherty makes clear the importance of Hawthorne for the future of Green2015,

I can’t emphasize enough how integral this park is to the forward momentum of the Department’s Green2015…[which] falls on the heels of GreenPlan, a prior greening and sustainability master plan. Both plans noted deficiencies in the city’s urban forest canopy and urged targeted plantings in South Philadelphia (only 1.8% tree cover) to help reduce urban heat islands “by shading buildings and paved surfaces”…Both GreenPlan and Green2015 showed that parks create opportunities for healthier lifestyles and reduce mental fatigue.

Another city initiative that has a role in Hawthorne Park’s design is PWD’s Green City, Clean Waters project. With more tree coverage and permeable land, Hawthorne Park will help reach PWD’s goal to reduce the impact on Philadelphia’s outdated water management systems by capturing the first few inches of rainfall. This, in turn, will free-up space at water processing plants and decrease the chances of untreated sewage entering our waterways.

While much of the park’s adherence to city green initiatives is required, Parks and Recreation, along with other partners, went above and beyond expectations and voluntarily applied for an additional program. The Sustainable Sites Initiative (SITES) is an effort to encourage sustainability in the design, construction and maintenance of landscapes through a set of prerequisites and credits. The park’s planning team already has a site assessment worksheet in which the climate and energy, hydrology, soils, vegetation, as well as other conditions are analyzed to meet SITES guidelines.

Who will maintain the park?

“We’re the only group in the area now with open space and it’s because of the people who have stuck with us all these years,” says Bullard. Indeed, the park might have been lost had it not been for intensive community organizing (the economic downturn probably helped as well).

Both HEC and Parks and Recreation know that the future success of the park depends heavily upon the very people who have rallied to save it. Dougherty says the friends group will help supplement City resources in maintaining the park after development. Representatives of the Pennsylvania Horticultural Society are helping HEC develop a friends group to protect and preserve the park for future use. Volunteers from Ready, Willing and Able–a non-profit training program whose main office is two blocks from the park–will also provide maintenance support.

Bullard, a neighborhood resident since 1983, says that while young professionals and students are among the most interested in volunteering for the friends group, long-time residents are active too. She says differences in social class, income, and race have never really been an issue of tension.

It doesn’t hurt that crime has noticeably decreased. Bullard says “there are still people selling drugs–it’s just a matter of time before that goes away too.”

Bullard doesn’t think that the park itself is going to solve crime. But beyond helping to reduce crime, there’s something she’s sensing–something the residents are feeling–that is giving them the hope of an improved Hawthorne.  And the park seems to be a tangible symbol of that hope.