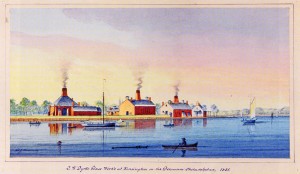 On a recent Wednesday afternoon, two dozen curious souls stood along a chain-link fence in a light snowfall, peering down into the dark earth and back into time. They were drawn to this site to catch a glimpse of long-lost textile and glass works whose origins date to colonial times, until recently sealed beneath the macadam and freight tracks of Beach Street on the industrial edge of Kensington.

Pennsylvania Department of Transportation’s $450 million project to reconstruct Interstate 95 and adjacent roadways includes changes to the layout of Beach Street and nearby Richmond Street. Thanks to Section 106 of the National Preservation Act, which requires that sites disturbed by federally-funded construction be surveyed in order to determine any cultural or archaeological significance, a detailed investigation of existing records and old maps was conducted. The study revealed that a succession of industries have occupied this location, beginning in 1774. Test pits dug through layers of asphalt, Belgian block, railroad track, and soil confirmed the presence of brick floors and stone foundations of early industrial buildings. 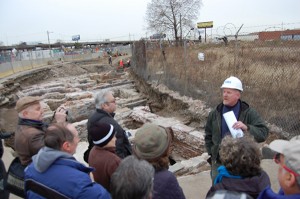 Beginning in November of last year, a quarter acre of the wide intersection of Beach Street and Richmond Street was methodically uncovered and excavated. What was found were foundations built upon foundations, spanning three different periods of time. And, beneath those, remnants of Lenape encampments stretching back perhaps twelve hundred years.

Rather than a permanent Indian settlement, the evidence indicates a series of overlapping campsites. This location along the tidal Delaware River would have provided ample opportunity to hunt various game–turtles, fish, and muskrat among them. Recovered stone points vary in size depending on their depth, ranging from large ones found at deeper strata which would have been used to tip spears, to shallower smaller arrow heads. Fragments of pottery have also been unearthed, as well as stones used for weighing down the corners of fishing nets.

The earliest stone foundations uncovered belong to buildings constructed between 1774 and 1816 for a calico printing works owned by John Hewson, a distant relative by marriage of Martha Washington. Hewson’s son John Jr. began glass-making at this location, an industry for which it would be known for the next hundred years. 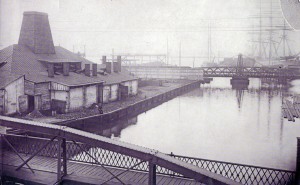 In the 1830s Englishman Thomas W. Dyott bought what had become the Kensington Glass Works, expanded production and founded a worker’s village based on strict Methodist principles. Three hundred employees were housed in what became known as Dyottville. Gambling and alcohol were forbidden; attendance at the company chapel mandatory. Dyott’s enterprises, including a private bank which circulated its own currency, failed with the financial panic of 1837.

Glass-making at the site did not end there, however. Later owner Lehigh Coal and Navigation built a massive anthracite coal depot nearby, but leased the glass works to various partnerships. Production of glass finally ceased in about 1923.

Evidence of these chapters in the site’s history have been borne out in the unearthing of large-scale masonry ruins, and of a myriad glass fragments. A hundred years of cast-off broken glassware surround the buried floors and walls of the glass works. At the archaeological site, small avalanches of stunning multi-colored glass spill from the vertically cut banks of dark, moist soil. As if the seemingly endless variety of original colored glass weren’t enough, occasional brilliant rainbow-hued pieces that have been colored by the gradual infusion of groundwater-borne minerals have been found here too. 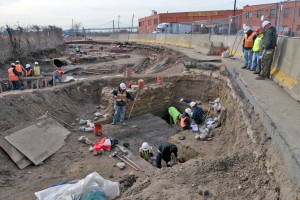 The irony is that this place, for all its beauty and historical significance, is not destined to be saved. Section 106 stipulates that a site be excavated and cataloged, its artifacts collected, and then left to the designs of the highway engineers. Consultant to PennDOT, URS senior archaeologist Doug Mooney will remain on site when construction gets under way, watching in the event that anything more of significance is unearthed. Plans call for new utility trenches to traverse the site, some as deep as 14 feet below grade. Finally, as part of the I-95 reconstruction, a stormwater-mitigating rain garden will be built atop the northern portion of the site.

Only that small section of Dyottville closest to what was Gunners Run–that is the section that ended up beneath city streets–has been revealed by this excavation. Much more lies beneath an adjacent brownfield industrial site that’s awaiting redevelopment. Unearthed foundations and tunnels run up to the property line, then apparently continue below ground on the other side of the property fence. After leading the recent tour of the site, URS’s Mooney looked wistfully across the fence and admitted that he and his team of archaeologists would love to see more of Dyottville, a wish that’s outside the scope of his project. Unless the adjacent property owner is willing to foot the bill for archaeological study–an unlikely prospect–the remainder of Dyottville will not see the light of day any time soon.