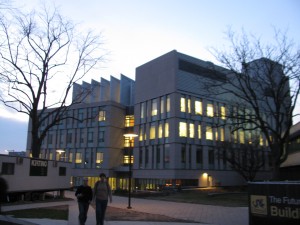 Approaching Papadakis from the academic quad.

Drexel University has pinned much of its hopes for enticing the scholars of tomorrow on an aggressive building program. Even now the future LeBow College of Business is a building-shaped hole in the ground and the grass where the new American Campus Communities building is to go has gone away. Beyond ambition and having a reputation for a painfully ugly campus, the aggressive building program was necessitated by the campus’ large stock of aging, poorly sited, and in many cases functionally obsolete, mid-century academic structures. It’s the natural life-cycle–only in this generation instead of orange brick and urban denial, we’re getting green walls and engagement with the city all around. Some things do get better.

For most the past decade, Drexel’s primary campus ambition has been to build dorms. This run culminated in the svelte Erdy-McHenry-designed Millennium Hall, a building whose sculptural ambitions show Scott Erdy’s mastery (for better or for worse) of Bauhaus design. However, the focus has shifted in recent years, as the university administration has begun a total retrofit and replacement program for its academic buildings: the new master plan, for example, targets a new engineering building along the 3001 block of Chestnut. The first building coming out of this program is the Papadakis Integrated Sciences Center, designed by Toronto’s acclaimed Diamond & Schmitt. It’s the new face of Drexel. 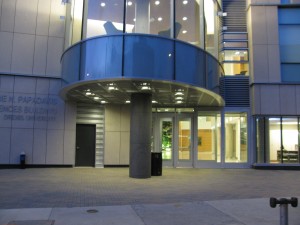 The main entrance on Chestnut.

Some time ago I critiqued this design as being an exercise in what I call “neobrutalism“–use of Brutalist material and ornament traditions, mixed with greater early 21st century sophistication. This is made evident in the exterior, whose admixture of limestone and high Modernism speaks to this tradition. (As a point of reference, Temple’s Anderson and Gladfelter Halls are likewise clad in limestone.)

Head into the interior, and the same gestures are made. Classic Brutalism–the Brutalism of Pei and Kling–is marked by the use of pale surfaces accented with inlaid wood. Papadakis’ defining feature–its atrium–is no different. Plaster is the ruling material here, accented by unfinished concrete on the supporting pillars and rich birchwood inlays along the faculty office wing.

Atria can be used in Brutalism. But it’s rare to pull it off in the classic tradition. Papadakis’ atrium instead marks a clear deviation from Brutalism: it is asymmetrical, shaped rather like a triangle splitting the structure into two large wings. The larger is a succession of research labs wrapping around the west and north side of the buildings, and the smaller the wood-inlaid wing of faculty offices along the east side. In the center of the atrium is a large spiral staircase accessing all five levels, beckoning use; along the rear, a tall, thin green wall. 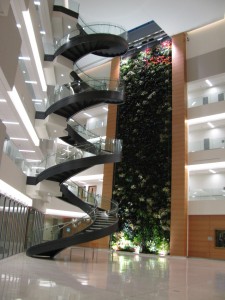 The main stairwell, coupled with the green wall.

Sterility is a classic mark of Brutalism, and this wall is a pleasant surprise, injecting fecund life and fertility into an otherwise-industrial structure.

A classroom building is a factory for learning, as Le Corbusier would say, and in its roofline Papadakis reflects this. It is not a large glass roof atop the building’s grand atrium, but rather a series of louvered skylights–much as was found on classic loft structures. This powerful centralizing and organizing element attracts far more students than seats have been provided for. These skylights have been deliberately placed to emit maximum sunlight–that is, directly south–and, indeed, the whole atrium, and hence the whole building, has been arranged around them. The green wall ambles down the sunniest face in the atrium, the face the skylights focus sunlight onto. The spiral stair, the atrium’s other defining feature, is offset to the west and placed close to the junction between the primary hallways on the upper floors–hallways that are, most of the time, balconies overlooking the atrium.

The other key feature is the pulling-out of communal areas to the edges of the atrium, in spaces overlooking Chestnut Street and the academic quad. These spaces are also positioned directly over the building’s entrances, meant to subtly beckon the passerby. But these spaces are not as heavily used as they could be; the ones on the third and fourth floors, facing Chestnut, instead subtly communicate they are staff lounges, sporting a glass door and prominent breakroom equipment. Unsurprisingly, they are the least used–almost empty, in fact, despite the crowdedness of the atrium below. 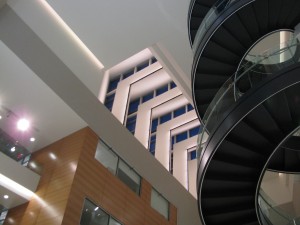 Looking up at the louvers in the atrium roof.

By contrast, the lounge on the second floor, which was open to the atrium, was heavily used, as were the lounging spaces along the quad side. While not much to pass through, the new wetland garden on the east side is certainly pleasant when seen from a comfy seat inside.

Returning outside, the coffee shop built into the corner is as heavily used as all campus coffee shops are; the windows offer  a breath of fresh air compared to classic Brutalism’s fortress obliqueness. Moving from Korman around the building offers a pleasant promenade. 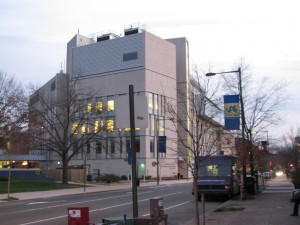 The underwhelming north side of the building.

Or perhaps the architects were looking forward to the future? This side of Papadakis is the only one that will not be permanently viewable from street or quad; the Korman building adjacent is decrepit, aging, functionally obsolete (it was originally built as a library, now hosts computer labs, and has insufficient light and air in the interior), and utterly at odds with Drexel’s goals of reconnecting to the city. But such a project is the better part of a decade off, even in the master plan.