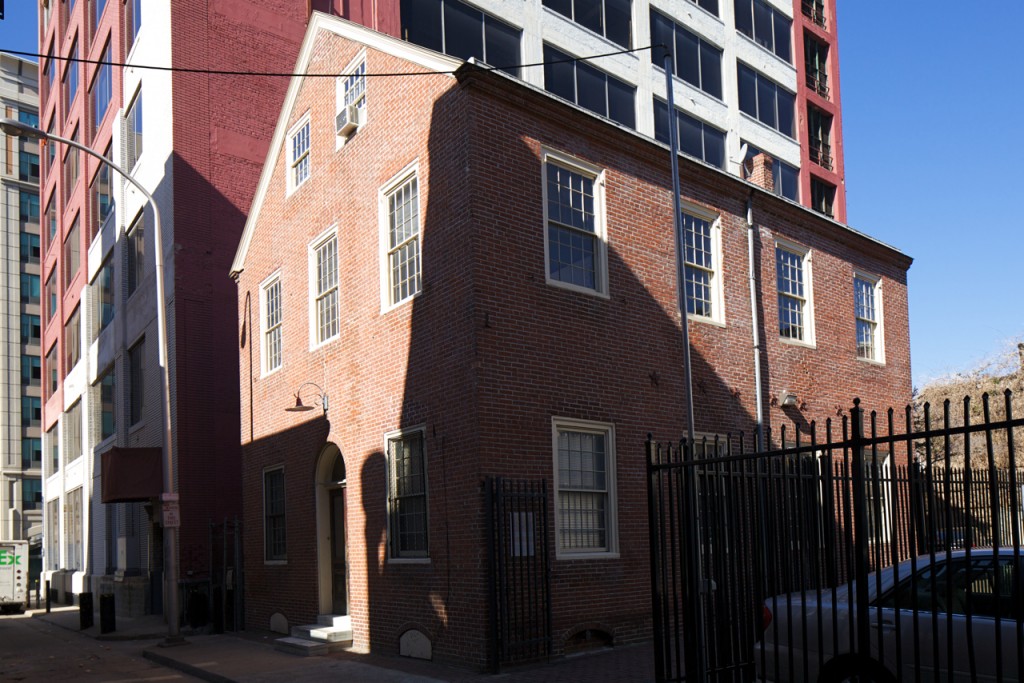 This little building on Spring Street, tucked away in a forgotten corner of Center City that I call Season City, (Summer and Winter Streets are close neighbors, Fall was somehow forgotten) is one of the last surviving Black Schoolhouses in America. It has survived development after re-development and street name change after street name change of all its surroundings. It is a true ruin from Philadelphia’s ancient past and America’s cultural heritage.

It all started with a man named Thomas Scattergood. This guy was like the Mother Teresa of Quakers. Known as the “mournful prophet,” Tommy Scats was deeply affected by the plight of both mentally ill and poor people. Late in his life, after accomplishing great things like creating a friendly retreat for the mentally ill in York, PA and establishing a Quaker school in Westtown (now West Chester), he decided to focus on the poor and uneducated children he saw running around by his home near the docks in Northern Liberties. 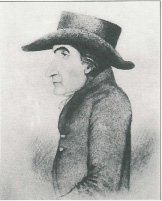 Scattergood was inspired by Quakers in Lancaster who started a school for indigent children and got together with 20 other Quakers on September 22nd, 1807 to form the Philadelphia Association of Friends for the Instruction of Poor Children. On January 11, 1808, the first version of the Adelphi School opened in a room of a house at the corner of two long-lost interstitial alleys. Only poor white boys were admitted at the time. Enrollment grew so quickly that by the Summer of 1808, a $7,000 school building began construction on Pegg Street, a wide diagonal boulevard that was one of the many awesome things obliterated by the construction of I-95.

Beginning in January 1809, the Adelphi School ran at the Pegg Street location for 9 years, until 1818, when the School District of Philadelphia was formed. The District used the building until it was demolished in 1825. Since the needs of educating poor white boys and girls were being met at this point, The Association of Friends for the Instruction of Poor Children decided that they should focus on educating black boys.

Four years of planning and fundraising led to the re-opening of the Adelphi School on July 10, 1822, this time for black boys, in one of the houses on the 300 block of Gaskill Street in Society Hill. The building is probably still standing, but no record seems to indicate which house it was. In 1825, the school moved to a room at the Abolition Society’s school building on the 600 block of Cherry Street, the site of which is now occupied by WHYY. 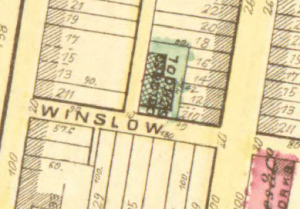 By 1831, the 12-member Board of Managers of the school got tired of moving every few years. Enrollment and academic achievement was high. One report stated that the students of the school were indistinguishable from those attending fancy seminaries. It was decided that a permanent home for the Adelphi school would be built at the corner of Wager Street and Winter’s Court (now Spring Street between Camac and 13th). A plot of land was purchased for $1200, and construction began on the $2520, 30′ x 40′, two-and-a-half story schoolhouse.

During construction, the Adelphi School moved again to the basement of a Methodist Church on the 1000 block of Cherry Street. The Adelphi School’s permanent home opened on February 21st, 1832, with the upper floors still unfinished… the whole building would not be complete until 1834. The first teacher in the new building was named Nathaniel J. Kennedy. Enrollment actually went down after the school opened because so many other groups were opening opening schools for African-American children. 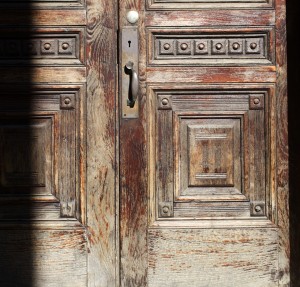 The Adelphi School ran in continuous operation on Wager Street for the next 7 decades. The name of Wager Street changed to Winslow and then to Spring. In that time, the school put together a library and started admitting girls and infants. The library did not allow books of an “immoral tendency,” like plays, novels, and romances.

Adults were also welcomed to attend the two class sessions per day, which ran from 9am to 3pm with a four week summer vacation from the end of July to the end of August. Even after black children were admitted into public schools, the Adelphi School took in students that could not attend them for one reason or another.

Finally, in 1906, the Adelphi School disbanded. The building was then purchased in 1908 by the Pennsylvania Society for the Abolition of Slavery, for the Relief of Negroes Unlawfully held in Bondage and for the Improvement of the Condition of the African Race (whew!). The building then became known as the Spring Street Settlement House or Spring Street Mission. There, students would learn things like basketweaving, chaircaning, and sewing while also holding Boy Scouts and Sunday School classes.

They must have only used part of the building, because around the same time, a series of businesses started inhabiting the old school, some at the same time. The A.P Witteman Company, manufacturers of industrial furnaces, held their offices in the building in 1906 and the E. H. Mumford Company opened their showroom in the space in 1908.

The Howell-Melville Company Machine Shop did engraving, electroplating, and dye-sinking at the schoolhouse in 1916 until 1923, when the Spring Street Settlement/Spring Street Mission started using the whole building. The Settlement/Mission used the building until 1945, when it was sold to private interests. Records are spotty about what was going on in the building immediately after that, but in 1968, Neil Schlosser and Luis Vincent Rivera, proteges of Lou Kahn, renovated the building for their architecture firm, which later became SRK Architects. Schlosser, a pioneering preservationist (and former husband of Judy Wicks), died last spring.

In 1969, the architects had the building added to the National Register of Historic Places.

Stuck in this barren and forgotten little neighborhood, the old Adelphi School building illustrates that every little corner of Philadelphia has a noble (and sometimes ignoble) connection to the past. One day in the future, when Season City becomes redeveloped and useful once again, perhaps the Adelphi Schoolhouse will get the honor it deserves.