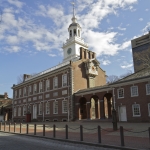 If imitation is the sincerest form of flattery, this patriotic carbon copy of Independence Hall here in Portland, Oregon is unabashed worship. Bank of America, indeed.

There are no metaphorical inferences here; this is, simply, America in the year 2012. Or, if you will, America at age 235½.

In its first 50 years, Andrew Hamilton’s State House did little more than eschew a distant, outdated monarchy, give birth to a new nation, and oversee the stability and growth of that young nation while its permanent capital was built on a marsh farther south. Independence Hall Jr. here isn’t quite 50 yet, but as you can see, its spirit of 76 is alive and well. 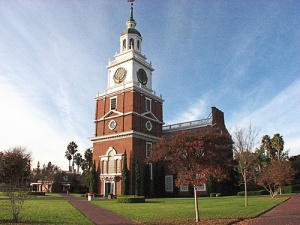 Bank of America wasn’t always the tenant of this knockoff. It was built in 1971 by Portland’s Benj. Franklin Savings & Loan during a patriotic construction spree which also included a new flagship in suburban Hillsboro, Oregon, an exact replica of Mount Vernon. Of course the Benj. was declared insolvent and seized by the government in 1990, a seizure which has since proven illegal, resulting in shareholders suing the government — and winning. Nevertheless, Bank of America took over the Benj.’s operations and has since the 90s been at this location, with convenient access to Mall 205, several gas stations, and Denny’s.

It’s not the only replica of Independence Hall, though. The 1939 New York World’s Fair lays claim to the original replica, home of the Pennsylvania Pavilion at the fair, since demolished. Knotts Berry Farm in Orange County, California opened its replica in 1966 at its California Marketplace, which also includes a TGI Friday’s and a 7,000 sq ft Snoopy Store. In 1971, Florida’s Walt Disney World opened its Hall of Presidents, modeled after, but not explicitly copied from, Independence Hall. And down in Montevallo, Alabama at the American Village theme park, whose mission is to “strengthen and renew the foundations of American liberty and self-government,” they’re raising the funds to build their own Independence Hall. 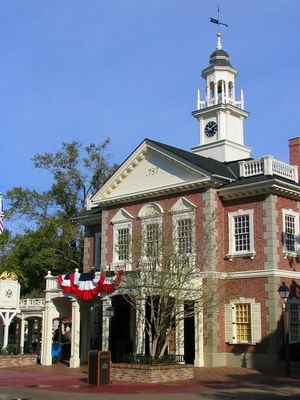 But these are, clearly, schlock reproductions with an admission fee and a gift shop. Hell, you even need a timed ticket to see the real thing in Philadelphia with its newly restored tower, the one protected by armed Wackenhut guards and surrounded by permanent bollards and chains and the occasional bike racks decorated with bunting, these the result of the great National Park Service compromise of the post-9/11 Bush Administration.

As specimens of what it means to be American go, the replica in East Portland makes a pretty strong case as being ‘most authentic.’ A branch of the largest bank in the country, this Bank of America exists by, and for, capitalism. And while you, the American citizen, could for roughly 250 years stroll freely through Independence Hall’s arcades between Chestnut Street and the public square where the Declaration of Independence was first read to the public, since 9/11/01, you cannot without an authorized ticket.

Out in the Portland replica, however, no ticket is needed to use the drive-through teller and ATM in the arcades. Now that’s freedom.