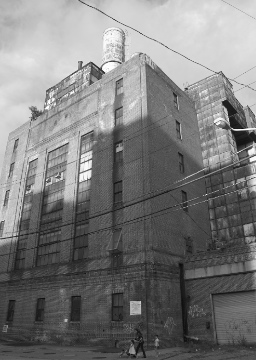 The phrase “hulking building” is often used when describing Philadelphia’s former industrial structures, grand abandoned hotels, and so on. Yet perhaps there is one huge/forsaken/troubled building that best exemplifies what a hulking building is in Philly: the Willow Street Steam Generation Plant.

Abandoned for about 30 years, this building at 9th and Willow (by Callowhill) is the proverbial eyesore, yet there is not much that anyone can do about it. Private developers have balked at doing some kind of adaptive reuse–the place is chock-full of asbestos–and city officials remain stymied. The structure has been is the news now and then, though not lately. It represents Philadelphia at its industrial peak, yet today is in a forsaken part of town that is also part of Center City.

Built in 1927 by the Philadelphia Electric Company, this large building was part of Center City’s steam system, which still operates. The plant burned coal, which was brought in via rail cars that ran along the Reading Railroad tracks that used to be on Willow Street. 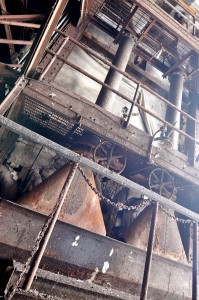 The large interior spaces that held the boilers preclude easy alteration for reuse, as there are no floors inside the building. There have been proposals to convert it into a trash-to-steam plant and also to cover it with huge wrap-around advertising. But nothing has happened. The need to remediate all that asbestos makes it prohibitively expensive to demolish. The building has been sealed by the fire department, because it’s so dangerous. The smokestacks are 163 feet high.

The roots of Philadelphia’s district steam system date back to 1889, when the Edison Electric Light Company of Philadelphia–which eventually became part of the Philadelphia Electric Company–began to generate and sell electricity from its central station at 908 Sansom Street. Later that year, exhaust steam from the plant’s engines was used to warm a nearby house at 917 Walnut Street, creating an additional revenue source. 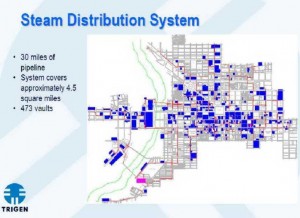 The Philadelphia Electric Company later built other steam generating plants, including this one in 1927, and constructed a vast underground steam network to serve various buildings and institutions. The system became the third largest district steam heating system in the United States. Steam pipes in Philadelphia run under sidewalks rather than under streets, as in other places. The steam is sent under pressure at a constant temperature of about 450 degrees, summer and winter, enabling the pipes to last for decades with little wear. 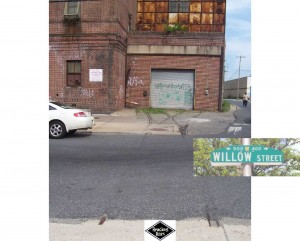 Former railroad tracks on Willow Street, leading into the plant.

Today, Trigen owns and operates the downtown steam system, which, as of a few years ago at least, delivers stream via 33 miles of underground pipes to customers throughout Center City and West Philadelphia. Nearly 400 of the city’s businesses, hospitals, universities, hotels and residential buildings use the steam for heating, cooling, hot water and so on.

The Willow Street Steam Generation Plant has been cut out of the loop since the 1970s. Still surrounded by manhole covers stamped with “STEAM,” the hulking building just sits there, year after year, decade after decade. One wonders how long this can go on, especially with the renewed interest in that part of town.