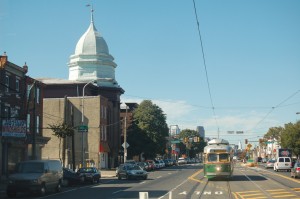 SEPTA’s two month long suspension of trolley service on Route 15 Girard Avenue has now grown to five or six months. The revised schedule has diesel buses providing Route 15 service until mid-April. The good news is that in the interim extensive improvements are being made to the trolley tracks.

$1.2 million is being invested in rail renewal at several locations along the 8-mile long route, including on the Girard Avenue Bridge over the Schuylkill River.

When the streamliners do return to service in April, it will be on a shortened Route 15. Due to PennDOT’s planned reconstruction of I-95, and related relocation of Richmond Street, trolleys will operate only as far east as the intersection of Girard Avenue and Frankford Avenue. A new loop has been constructed at Frankford Avenue and Delaware Avenue, opposite Sugar House Casino, to turn the trolleys around. Until PennDOT’s I-95/Richmond Street projects are complete–in an estimated two to four years–diesel buses will provide transit service on East Girard Avenue and Richmond Street. Once that’s done, trolleys will once again run the entire length of Route 15, to Westmoreland Loop (just north of Allegheny Avenue on Richmond Street).

Built in 1948, Girard Avenue’s fleet of eighteen streamliners isn’t destined to run forever. When the cars were rebuilt in 2003, specifications called for a fifteen-year life extension. SEPTA’s long-range plan is to procure a large new fleet of modern low-floor streetcars that will replace both the Girard Avenue cars and the thirty-year old railcars that now operate on the subway-surface lines in West and Southwest Philly.