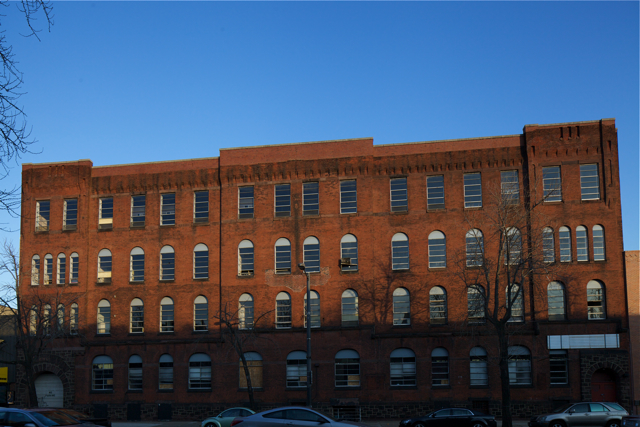 When a big, historic, seemingly desirable building stands empty for the better part of a decade, there’s usually a story behind it, whether the property is the McIlhenny Mansion on Rittenhouse Square or the Cunningham Building on Chestnut Street. So too with the old Third Regiment Armory on South Broad Street just north of Wharton. Built  in 1886 for a National Guard unit raised by Benjamin Franklin, the imposing brick structure has been caught in a legal quagmire that’s kept it vacant and deteriorating for eight years. And while there has been some movement lately to free the Armory, its future remains uncertain.

Plans, restrictions, and promises made
The trouble started in the early 1980s, after the national guard unit moved out of the building, and a small nonprofit called the Tolentine Community Center and Development Corporation began renting the building from the state. Among other things, Tolentine runs a summer camp for kids and a popular weekly bingo game for senior citizens. Indeed, Tolentine has been a community center first and a development corporation a distant second, which would eventually become all too apparent. 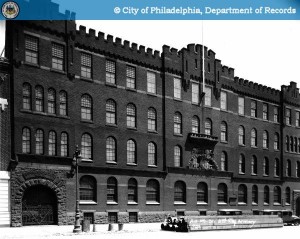 In September of 2003, Tolentine bought the armory from the State of Pennsylvania for $106,246 with hopes of turning it into a community center. Two restrictions were built into the bill of sale, however: The building had to be used “for community social service programs only” and couldn’t be resold. That much is a matter of public record. According to Tolentine’s acting president Anna Mattei, the State said it would provide $5 million to help renovate the building. Nothing was committed to writing, however, and the state funding never materialized.  No contract, no obligation.  After using the building for bingo games for a few years, Tolentine moved into a smaller building. The Armory needed a complete renovation, which would cost $4 million dollars, said Mattei–money they didn’t have.

Watch out French privateers
The armory was built for the Third Regiment of Pennsylvania Infantry, which began as a volunteer militia raised by Benjamin Franklin in 1747 to defend Philadelphia against French privateers on the Delaware River.  The regiment was called “The Associators,” then another term for firefighters, to hide the group’s military purpose from pacifist Quakers. It  first saw action in the French and Indian War, and has taken part in almost every war since then. Two other guard units had armories in Philadelphia in the 19th century, the Second Regiment of Infantry and the First Troop Philadelphia City Cavalry.

Armory buildings at this time were used mostly as depots for arms and equipment. When a regiment was mobilized for duty or for annual training exercises, these arms would be rapidly issued to the citizen soldiers. One history of the guard from 1894 claims that more than 8,000 men could be mobilized in just 24 hours. The Third Regiment accomplished this kind of rapid mobilization in 1898, when it was called for service in the Spanish-American War. A more typical deployment in this era was to put down rioters, as the regiment did at the infamous Homestead Steel strike of 1892. 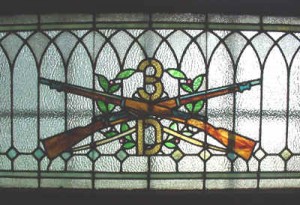 The City makes its claim
As if the trouble with the state wasn’t bad enough, Tolentine began to have difficulties with the City of Philadelphia as well. By 2007 the building was deteriorating and local residents complained. These complaints lead to legal action by the Department of Licenses and Inspections, who charged that Tolentine was not keeping the building up to code.

According to Mattei, Tolentine does maintain the building, paying for insurance and keeping it compliant with fire codes. “The building is not abandoned,” said Mattei. It is vacant, however, making it an inviting target for vandals and scrappers, who have forced the nonprofit to make frequent repairs. Tolentine has spent more than half a million dollars on maintenance since acquiring the building in 2003, not including the money spent on  its four-year legal battle with L&I.  The building had become a proverbial money pit, to the point where Mattei tried to give the building back to the State for free in 2008.  The State wouldn’t take it, and also declined to change the terms of the sale.

The cost of owning the armory has continued to grow for Tolentine. In 2009, the city mistakenly informed the nonprofit that it owed the City $30,000 in back taxes.  After a lengthy court battle, the city agreed in 2010 that Tolentine didn’t owe property taxes. The following year the City tried to tax that same piece of land again, but backed down in a November 2011 hearing. Later that month a court decided the armory was in fact in compliance with building codes. This bureaucratic morass, in both state and city governments, had been holding the Armory hostage, and Tolentine along with it. “I’m not accusing one political party or another,” said Mattei. “It’s just inefficiency across the board.” 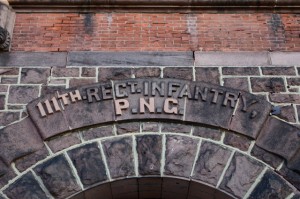 Who will pay?
To try to break the logjam, Mattei reached out to State Senator Larry Farnese (D-Phila), who introduced SB 1368, a bill that would remove the restrictions from the deed. If passed, it would allow Tolentine to finally sell the property.  Farnese is looking for a solution that will “balance the interests of the state, Tolentine, and the community,” said Mannino. “We want to break the legislative log jam so we can start doing good things.”

Tolentine may have to pay a hefty price to extricate itself from the situation, however. According to Mannino, the final deal will probably require Tolentine to pay the state money equal to the value of those restrictions.  Mannino stresses that the bill is still in draft form and could change a lot as it grinds through the legislative machinery in Harrisburg.  No agreements have yet been made, though, and the state has no immediate plans to have the value of the restrictions appraised.

When she learned that the state wanted more money to remove the restrictions that are preventing Tolentine from selling the building, Mattei was stunned. “I got very angry,” she said. Mattei and her lawyers claim that Tolentine owns the property completely, and all the rights attached to it.  Some parts of the state government apparently agree with her. According to Mannino, the Department of General Services (which sold the property in 2003) agrees that the state no longer has any ownership.

Once the building’s title is cleared up, it should attract interest in the marketplace. Mattei said she has received inquiries from several developers, as well as the Philadelphia Performing Arts Charter School currently located at Broad and Shunk Streets. The charter school has even issued a request for proposal from architects to turn the building into a theater and classrooms.

Everything now depends of the bill being approved in Harrisburg. In the meantime, though, the Armory’s condition continues to grow worse. Scrappers recently tore a hole in the roof  while trying to remove a large air conditioning unit, and repairs will cost $40,000.  “It’s wasting money whatever we do with it,” said Mattei. She is optimistic that the situation will eventually be resolved, but no one, at Tolentine or in Harrisburg, has any idea how long this will take.