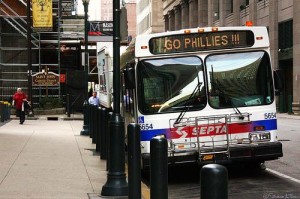 Last month, SEPTA proposed a new South Philadelphia Crosstown bus service, which would link South Philly east of Broad with Market West, with 10- to 15-minute frequency. SEPTA has put quite a bit of thought into this proposal, with an online survey and open house (from half a month ago). My best knowledge is that the proposal would be a 57 spur down Market, which is much better than the initial rumors, but still falls prey to the critique below.

The Crosstown sounds better on paper than it really is. In reality, it’s poor planning. Jarrett Walker, at Human Transit, explains why. In Walker’s system, the key for transit’s usefulness is not having one-seat, point-to-point rides, but rather a core network (what he likes to call a “frequent grid”) which offers one- or two-seat rides from anywhere to anywhere in the city.

Philadelphia already possesses such a grid, but it is neither highlighted nor promoted, and so we are blind to it. The bus network in our urban core consists of routes like the 2, 15, 23, 43, 47, 48, 57, G, K, etc., which run on numbered streets and major east-west avenues in such a way that they all intertwine. This grid is ancient, dating back to the days when Brill streetcars roamed the streets, and has perturbations (such as the 17 and 33) which date back to the days when core activities were concentrated east of Broad. This grid is also frequent–none of its core routes have a frequency less than 20 minutes, and most far more. Finally, it is busy: the vast majority of SEPTA’s busiest routes, such as the 23 and soon-to-be-split C, are along it. (Were SEPTA not tasked with running uncrowded and infrequent suburban buses, and able to concentrate solely on major assets like the rail network and this grid, its fairbox ratio would be much higher.)

To put it another way, in its bus system, Philadelphia has a massive–but underappreciated–transit asset. As such, any new proposal needs to be examined not in a vacuum, but also in light of how it relates to this grid. Proposals which reinforce the network as a key piece of our transit infrastructure (by, for example, making individual routes in it more frequent, or streamlining transfers, and so on) are thus to be prized, while those which are ambivalent to it, or worse, undermine or consign it, are not. 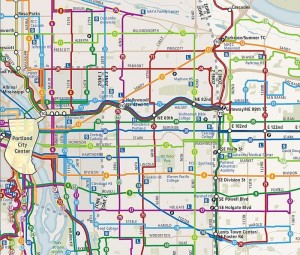 Instead of the South Philly Crosstown, SEPTA should (at much less expense): Make the 64 more frequent, from an eternal 20 minutes to a less-frustrating 15 or even 10. The Washington Avenue bus collects from a very large swath of South Philly and can be used to distribute to northbound Center City buses (2, 7, 17) and the Penn Medicine job center. In fact, why not have a route spur/detour there during peak hours?

After this is done, remaining unallocated buses can be put to work on the 2, which, whatever its clockface frequency, tends to run (and feel) late no matter the time of day. Ensuring a 10- or 15-minute headway on a busy core route just seems sensible.

(This same principle can apply to all of the routes in the network with perceived or real frequencies under 15 minutes–routes like the 40, 43, or G.)

Lastly, improve transfers ahead of the new fare system. This can be done by moving bus stops so that the most popular transfers have the shortest traversal distance, by adding/improving bus shelters at popular transfer points, and by possibly even making some of the busiest transfers free for all users, not just a pass perk.

None of these possibilities cost any more than a whole new route, and all enforce the importance of the core service network–a frequent grid presciently laid out by planners more than a century ago.