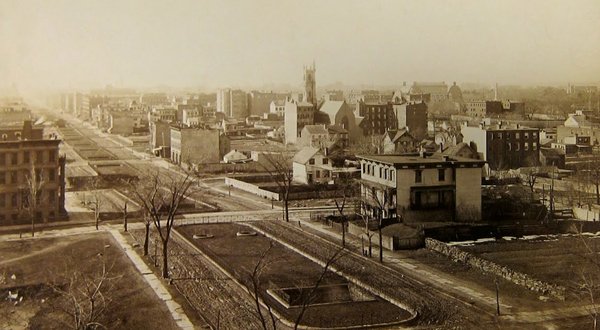 Museum of the City of New York Notice how Park Ave. filling in, 1882, looks like Lancaster Ave. emptying, 2012

We imagine William Penn sitting in an English estate looking out fearfully at the chaos of London, and inventing our rational grid, a stamp of a new way of life on the edge of a wild river. Reality, as I have noted before, was quite different. Penn wished for a great piece of land–10,000 acres–on which to superimpose his great city; after negotiations with the Swedes and the Lenape, he got his narrow slice between the rivers. But the act of making a city, as landscape architect Dilip da Cunha says, was one of encountering the ground itself, and building little by little, only as the ground would allow (for decades trees stood in the middle of streets and creeks sprang everywhere).

The resulting man-nature compromise, amplified now in the post-industrial retreat, is a city, as writer Sharon White puts it in Vanished Gardens, that is “an extensive garden, a bit wild in parts…Because isn’t it a wilderness of sorts? The bones of the wilderness still there in the brooks flowing in pipes under the city, the soil that pokes up with its history of the old wilderness soil, rerouted, recycled elements.”

Not so, perhaps, the other one, the 1811 grid of New York, which celebrates it 200th anniversary in a show at the Museum of the City of New York. New York Times architecture critic Michael Kimmelman says in yesterday’s paper, “the grid was big government in action, a commercially minded boon to private development and, almost despite itself, a creative template…The planners proposed a grid for this future city stretching northward from roughly Houston Street to 155th Street in the faraway heights of Harlem. It was in many respects a heartless plan.”

“The plotting of the streets and blocks,” writes Rem Koolhaas in Delirious New York, “announces that the subjugation, if not obliteration, of nature is its true ambition.”

decided to grow along a grid, ignoring bumps, ditches, and heights, and the particular bend of its rivers. It would be a phantom grid of 2028 blocks, where anything that was built upon them could be removed at will. So we have the Empire State Building dug into the old cradle of the Waldorf-Astoria. And the Waldorf is shoved into another grid. We have a Madison Square Garden on Madison Square and then the Garden starts to float, like a gondola on the grid. It reappears uptown, caters to circuses and rodeos, the Rangers and the Knicks, becomes a parking lot, and the Garden is born again over the new Penn Station. It’s an ugly ass tank, but who cares? Nothing is sacred except the grid.