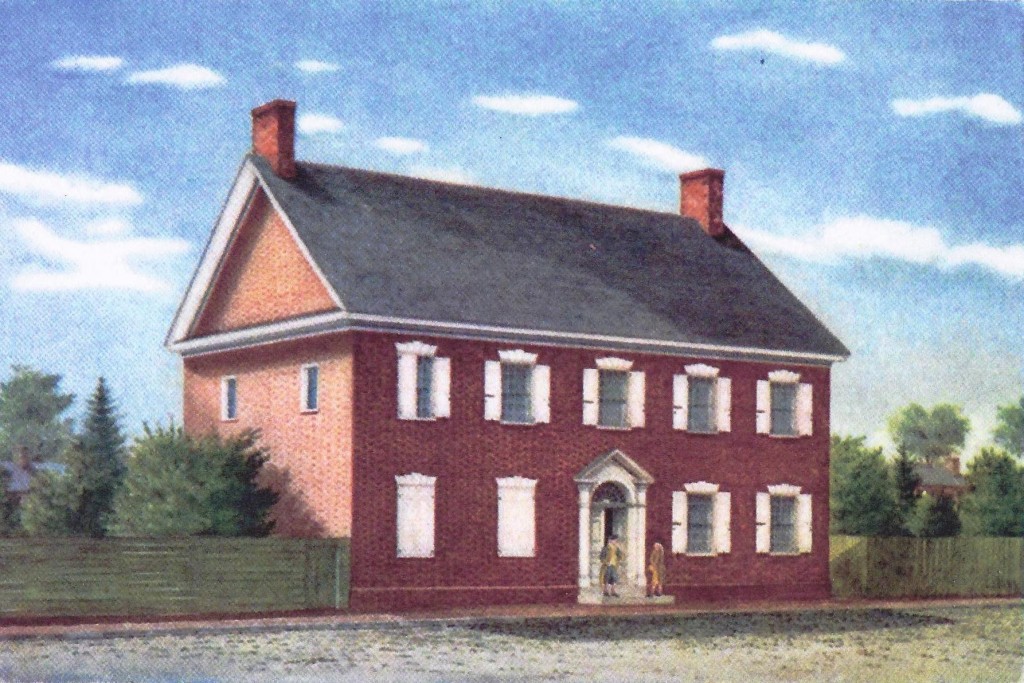 Today marks the 255th anniversary of the first documented public concert to be held in Philadelphia. The January 20, 1757 edition of the Pennsylvania Journal and Weekly Advertiser included the following notice:

By particular desire; On Tuesday next, the 25th Instant, at the Assembly Room, in Lodge Alley, will be performed a CONCERT of MUSIC, under the Direction of Mr. John Palma … Tickets to be had at the London Coffee-house, at one Dollar each.

There had been private concerts–basically musical soirees for invited guests–prior to this in Philadelphia, and there had been dancing assemblies where the elite of the city gathered at members-only events to dance and socialize, but John Palma’s is the first known concert in Philadelphia open to the general public. Philadelphia was actually well behind other colonial American cities in this regard; there had been public concerts since the 1730s in Boston, New York, and Charleston.

Little is known about John Palma, one of many European immigrant professional musicians active in Philadelphia in the eighteenth century, and nothing is known about the music that was performed at his concert. There is no surviving program or description of the event. It was probably a mix of scores by European composers who were popular at that time and perhaps some pieces composed by Palma himself. 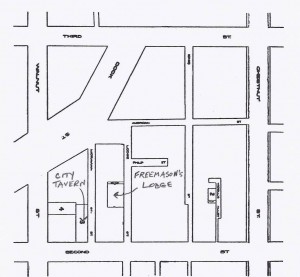 The location of the concert, though forgotten today, can be traced from historical accounts and maps. In 1755 the Freemasons of Pennsylvania erected a Masonic Hall in Lodge Alley near 2nd and Walnut Streets. The stately two-story Georgian style brick building, known as Freemasons Lodge or Lodge Hall, was the first Masonic hall in America. The Assembly Room in the Hall was the venue for Palma’s concert and would be the site of many musical events over the next several decades.

The building was situated on the south side of Lodge Alley, which ran for a half block, west from 2nd Street, north of and parallel to Walnut Street. There is no trace of the building or Lodge Alley today. Masonic Hall was demolished around 1801 and the alley is now a non-descript parking area behind the massive US Customs House building that fronts on Chestnut Street. Lodge Hall would have been in the parking area on the south side of the Customs House, just west of 2nd Street, perhaps 100 feet or so northwest of City Tavern.

John Palma’s January 25th concert must have been fairly successful, for a few months later the Journal and Weekly Advertiser carried a notice for another concert to be held March 25th at the same place. John Palma is not mentioned by name in this notice, but we know from another source that he was involved.

In attendance that evening was young Virginia military officer named George Washington. In his ledger book, Washington recorded an entry on March 17, 1757 for purchase of “Mr. Palmas Tickets.” This was probably Washington’s first concert in Philadelphia, but it would not be his last. Some thirty years later he would be a regular concertgoer as a resident of the city, first as President of the Constitutional Convention and later as President of the United States. 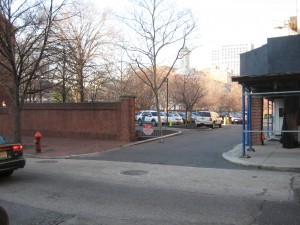 Current view of location of Lodge Alley, off 2nd Street behind US Customs House. Freemason's Hall would have been approximately where the cars are parked. Photo by Jack McCarthy

Late January 1757 was an auspicious time in Philadelphia music history. In addition to the first public concert, the first performance of a “serious” opera in America took place at this time at another location in the city. This will be the subject of a future article.