Editor’s Note: Great writing has been lavished on Philadelphia–but not in any kind of quantity. New York got Joseph Mitchell and A.J. Leibling; Chicago got Saul Bellow and Nelson Algren; we got…Christopher Morley. Nathaniel Burt’s The Perennial Philadelphians, John Lukac’s Philadelphia: Patricians and Philistines and Cornelius Weygandt’s Philadelphia Folks all do a fine job of capturing the peculiar character of our city. Yet none matches the prose style of an obscure insurance executive named R.C. Smith, who wrote a splendid little volume of remembrances in 1970 called In and Out of Town that we recently stumbled across. Among the book’s essays is one describing the then-new Mercantile Library on Chestnut Street, (now absorbed into the Free Library), which we wrote about last week.

After renting various locations, the Mercantile Library built its own building at 5th and Library (now Sansom) in 1844-45. The Library moved to 10th St. in 1869 and this building was demolished in 1925.

“When they stripped the tin from the Mercantile roof and the wreckers got busy, South Tenth Street across from St. Stephens was full of the dust from seventy-five thousand books on the way to storage. They had been around for a long time and the former Pennsylvania Railroad Freight house shared their bouquet with its readers and abetted allergies among the susceptible.

Libraries are tough. The structures get obsolete and are torn down; but the books, the best of them, stay with us and long after us, and are as nearly immortal as things need to be. The fortunate arrange-
ment: “continued in our next,” has run the Mercantile through a succession which began on lower Chestnut Street in 1822. 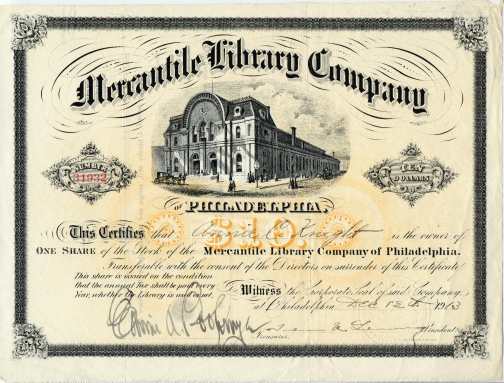 Its golden age as a subscription library was illuminated by gas jets for members who kept their certificates in tin boxes with Building and Loan shares and Pennsylvania Railroad Common. All Mercantile dividends were special: rights of trespass beyond the small door west of the fish aquarium, access to the new books and the sure boon of a Windsor chair in the reading room. And such was the proximity of the stage door of the Chestnut Street Opera House that readers, by open southwest windows when Richard Mansfield was in town, might have picked up snatches of Shakespeare floating across Ranstead Street.

The latest Mercantile in the long succession is ten years old. At first its thirty-six foot front in stainless steel and glass seemed about as unnatural a descendent of the demolished Tenth Street quarters as possible. 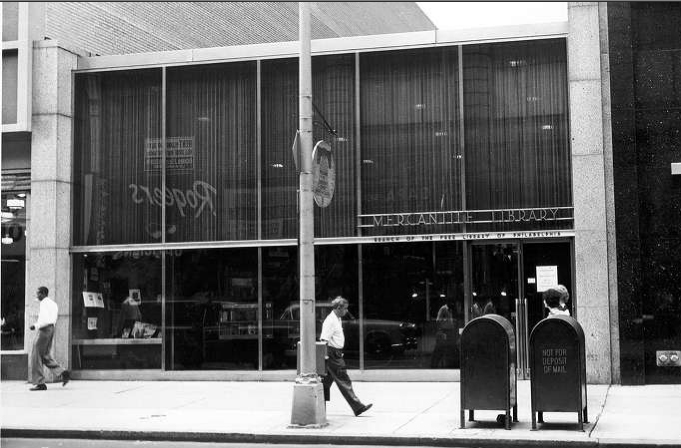 The dusty smell is gone and probably a good thing, and the rooms for lady conversationalists and chess players are missing. But down-
town Philadelphia, preoccupied more than ever with parking lots, welcomes a haven for the pedestrian, leg weary and still convinced that library shelves carry the best which mankind provides for its own.”