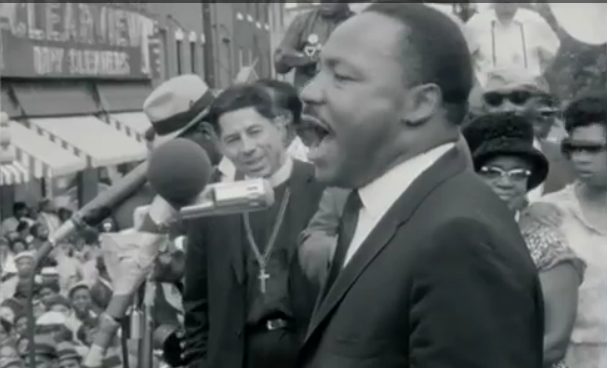 Cecil B. Moore, head of the Philadelphia chapter of the NAACP, had no interest in Martin Luther King, Jr. coming to Philadelphia to join the protest to desegregate Girard College. It “appears,” he said, in the summer of 1965, “as if the white power structure is using [King] to divide Philadelphia Negroes.”

And, indeed, according to University of Michigan historian and Germantown native Matthew Countryman, author of Up South: Civil Rights and Black Power in Philadelphia (Penn Press, 2006), liberals wanted to use King to challenge Moore’s more radical approach to civil rights in Philadelphia. But Moore wouldn’t have any of it. “The imported Gandhi philosophy of non-violence will not be accepted in Philadelphia where we believe in self-help and self-defense.”

King and his supporters had hoped to kick off a northern organizing tour for the Southern Christian Leadership Conference (SCLC); the fight to desegregate Girard College would be just the issue to ignite a broad Northern civil rights campaign. But King didn’t want to create dissent, so he decided not to come to Philadelphia. But two days before the planned August 2nd visit, a deal was reached.

Moore, however, refused to attend a breakfast in King’s honor at the Fellowship House on Girard Avenue that morning. Nevertheless, the two men amicably came together at a rally for 10,000 people in West Philadelphia. And later that day, King spoke in front of the Girard College wall.

“Now is the time to straighten up Girard College,” exhorted King, “now is the time.” (You can see footage of the protest in “Stephen Girard: A Philadelphia Legacy,” a film I wrote, which was produced by History Making Productions. To watch the 18 minute film, click HERE.)

But Moore kept King’s SCLC out of Philadelphia; it was the more militant Moore, and not King, who was truly popular among working-class African-Americans.

King’s alliance with local white liberal elite had gone back some 15 years to his student days at Crozer Theological Seminary in Chester. During that period, writes Penn historian Tom Sugrue, in Sweet Land of Liberty: The Forgotten Struggle for Civil Rights in the North (Random House, 2008), King was largely protected from covert racism. But one night in June, 1950, recounts Sugrue, King went to dinner with a group of friends. They drove to Mary’s Cafe in Maple Shade, NJ. “It could have been a scene from a movie–four students in a roadster headed to a roadside diner,” but they were refused service. King and his friends wouldn’t leave, prompting the restaurant owner to pull a gun, chase them into the parking lot, and fire a shot in the air.

The local NAACP helped the four students file a complaint against the restaurant. But three white Penn students who witnessed the incident refused to testify, and the case fell apart.