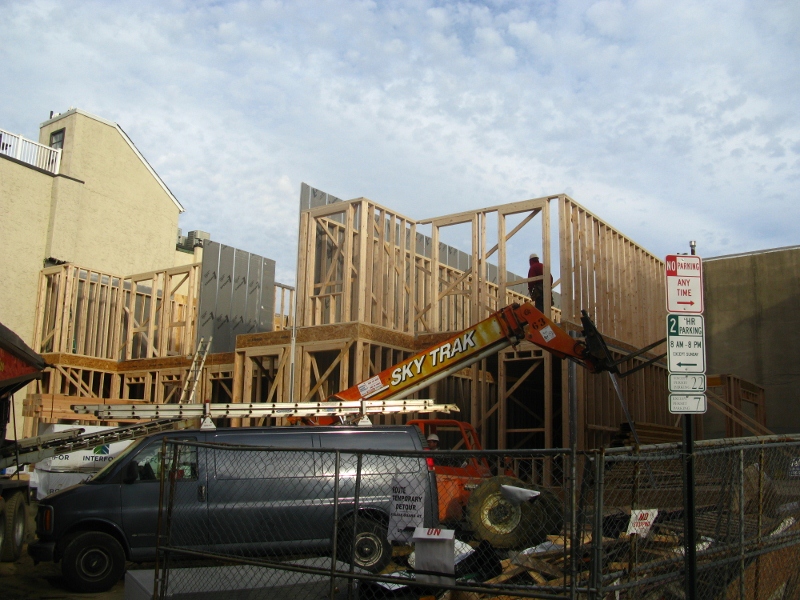 All day I’ve been listening to the sound of construction outside my window. The cloudy cries of workers, which rise and fall above the slur of the cement truck and beat of the hammer like distant memories. Yes, in dribs and drabs, we’re building again.

Actually, in a few block radius, there are a good 2 dozen houses going up right now, schoolboy sticks rising against the pale gray sky. All destined to have bricks stuck on the front and Dryvit stuck on the rear. Schoolboys have more imagination.

These four houses across the street will have surface parking spaces, 1950s driveways, stuck on the front too, right at a bus stop of one of the city’s busiest bus lines.

But it’s useless to rail against cars; the developer will argue he’s out a half a million dollars if he doesn’t provide parking (which by law he doesn’t have to do anymore). Someday, if Inquirer architecture critic Inga Saffron is right, urban land will be too valuable to use for the storage of the motor car.

There are somewhere between 500 million and 2 billion surface parking spaces in the US, says New York Times architecture critic Michael Kimmelman, 30 for every person in a city like Houston.

Kimmelman says American attitudes on the surface lot are changing; cities (indeed like Philadelphia) are altering zoning codes to take back the urban fabric from the automobile.

In most places this effort isn’t going very well. But one needs perspective on all things. On Monday, Peter Woodall, who was moving his apartment, brought me a pair of city plans from the late 1960s and early 1970s (specifically the 1960 Center City Plan and a 1972 study by John Gallery and Ricky Wurman called “Man-Made Philadelphia”). The most dramatic realization, in looking over these documents, is how replete downtown was with surface lots (watch the Cassavetes film “Mickey and Nicky” for further proof). In some 40 years we’ve killed off miles of ’em, and some now even contain handsome–and vital–buildings.