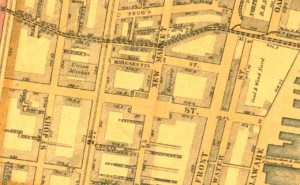 The intersection of New Market Street and Callowhill Street showing the town square. Two of the four corners that Thomas Penn laid out for a food market remain open by the 1860s. The two northern corners have structures on them. 1862 Smedley Atlas.

Callowhill Street was first called “the new street” since it was the first road opened in Northern Liberties, beyond Philadelphia’s original boundary. This was in 1690. Apparently during his second stay in America (1701-02), William Penn renamed the street after his second wife, Hannah Callowhill.

Callowhill Street is unusually wide as it approaches the Delaware River because several market sheds were located in the middle of and alongside the avenue in the mid-1700s. A town called Callowhill, platted by William Penn’s second son Thomas, grew up around this shopping district.

Penn’s descendants owned much of the land in the Northern Liberties District north of Vine Street, and they routinely sold off lots to generate income. The lots around Front and Callowhill were choice lots, the first across the city line, near the waterfront and providing easy access to all parts of the original city. Around 1768-70, Thomas Penn laid out New Market Street, a north-south lane between Front and Second and then dedicated four corners of the intersection with Callowhill Street for a public market.

This became the town square of the new town of Callowhill. 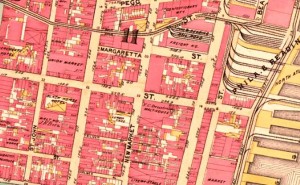 Quakers who wanted to get away from the swarming town of Philadelphia moved to Callowhill. It accordingly prospered as the city’s most immediate northern suburb. The town eventually extended west to the Old York Road, which was once between Forth and Fifth Streets.

The community remained a food distribution hub and a residential area well after being subsumed into the city of Philadelphia. Even in the 1950s, when the neighborhood was certainly shabby and forgotten, Callowhill was still an active meat and produce center. But it was, by then, part of Philadelphia’s Skid Row district, a place replete with cheap flophouses, grubby bars, dilapidated warehouses and so on. 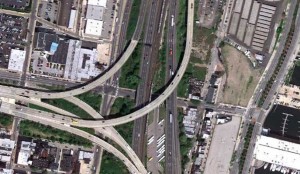 The East Callowhill Urban Renewal Area of the late 1960s began the decimation of the neighborhood in advance of the arrival of I-95. Hundreds of modest houses and small shops were torn down. New Market Street was also removed in that vicinity too, replaced (directly on top) by the elevated highway. The intersection of Callowhill and New Market was right where the present Callowhill Street dips under the freeway.