In Roxborough, Will Land Use Mistakes Follow Ethics Violations? 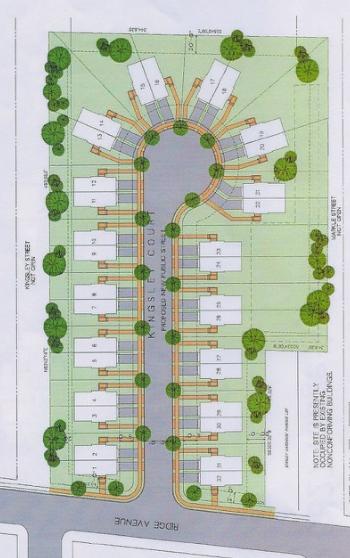 The former Ivy Ridge Personal Care Center, ground zero of a Villanova socialite’s bilking of disabled citizens to finance her lavish lifestyle, may soon be redeveloped. The atrocious treatment there only ended in 2009. Since then the site has seen multiple arson fires. It is today a blight on the neighborhood, and it will certainly be torn down.

The most advanced redevelopment plan for the site, rejected for now by the Wissahickon Neighbors Civic Association, is Stephen Goldner’s “Kingsley Court.” The project was revealed to the public last week, a  presentation, according to the Roxborough-Manayunk Patch, “often drawing chuckles.” But let’s not criticize Goldner’s proposal just yet. He says he is trying “to be a good neighbor.”

As it turns out, Goldner is also a principal developer of Carpenter Square in G-Ho, one of the highest-quality green projects in the city. And in a past life, he was an affordable housing architect (some of it in the garden-apartment mold). He is now retired.

The bottom line is that Goldner is an urbanite, one whose work inhabits the city, one who certainly seems to “get” the city, in whatever fickle mood it may be. And the site–near the corner of Ridge Avenue and Walnut Lane–is hardly suburban: it is close to Roxborough Hospital, and the bulk of the community closest to it (especially to the south, and a part to the northwest as well) is urban, consisting primarily of attached housing built between the 1920s and 1950s.

But Goldner’s 32 house plan for the site is, in fact, numbingly suburban, complete with cul-de-sac.

Let’s start by talking about density. 32 homes is not dense for the neighborhood. It is dense by the standards of a small section of mid-century suburbia behind the site, yes, but it is not dense compared to its neighbors south of Ridge–all attached housing–or along Walnut Lane or Seville Street–closer-together twins with some attached housing intersprinkled. At that density, common to the north side of Ridge, about 40 twins will fit on the site. 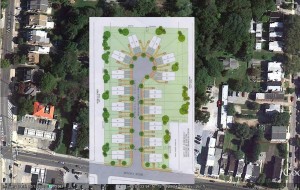 The second mistake is a cul-de-sac. Goldner claims to be worried about traffic concerns, and there are complaints about traffic going 40 miles per hour on Seville Street, which is connected through between Ridge and Henry, but a cul-de-sac is the wrong way to solve this problem. Better inspiration can be taken from the streets of Yorktown and Packer Park, where the automobile network has been disconnected, but the pedestrian one has not. There, series of pedestrian passages link together what on the map appear to be cul-de-sacs. Goldner’s current proposal instead abandons the existing plat lines through the site in favor of an entirely new street where the alley would be were the existing plat followed. Worse site plans for city lots are rarely ever seen.

The third mistake is failing to provide any commercial space along Ridge. This stretch is commercial by nature: on one side is Stanley’s Hardware (which was previously rumored to be interested in the site for expansion), and on the other a gas station, a Dunkin Donuts, and a 7-11 regaling the corner of Ridge and Walnut. Businesses are strung along Ridge from downtown Roxborough to Wissahickon station.

Critically, Goldner has also promised “a deal to purchase [the lot] if the neighbors would be willing.” This, by all rights, is the worst mistake. According to the City and the good folks at Philadelphia Speaks, the felonious former owner of Ivy Ridge currently owes $85,000 in back taxes on the site. With a history as sordid as hers, is it even ethically justifiable to buy the property from her when its back taxes are more than enough to force a sheriff’s sale? Does she deserve so much as a single penny more from the site?

There are ways to develop the site that are more in tune with the community. First off, don’t ignore the existing plat. While I understand that neighbors don’t want through traffic roaring up Kingsley and down Markle, perhaps a loop street is called for, or a fishhook if it proves impossible to extend the Markle side all the way to Ridge, following the plats of those two with a cross street right about where Quentin would be, if its line was followed west. 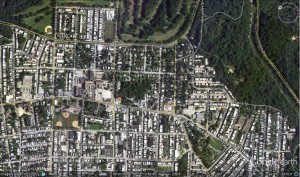 Zooming out: a neighborhood view of this section of Roxborough. Notice all the attached housing

Second, walkways–possibly even bikeways–could then be extended to the existing terminus of Kingsley and the corner of Markle and Houghton. You could pay for this with the money you saved by buying from the sheriff instead.

Third, look at the existing neighborhood for a guide. Building at higher density would accord with the historical development pattern. Furthermore, with a sizable chunk of the site facing Ridge, and active commercial abutting the site, some commercial would be recommended. A possibility would be stacking some homes in a walk-up condo format on top of this commercial property, with the entrances either on the front or rear of the structure, and maintaining twins throughout the rest of the property, thereby ensuring a good site interface between the attached housing south of Ridge and detached housing north of Houghton.

Having put up with so much for so long, neighbors here deserve a truly special development; the time for willful carelessness is over.