How To Read Your State 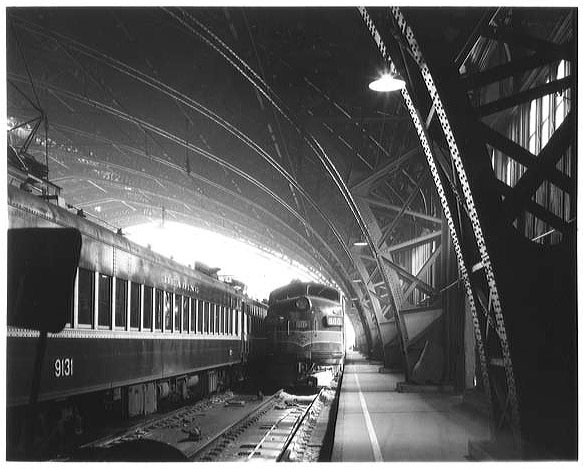 Buildings of Pennsylvania: Philadelphia and Eastern Pennsylvania,” just out from the University of Virginia Press ($75), is a tome with intellectual heft and intriguing insights worthy of its physical weight.

Cultural historian George E. Thomas (co-author of Frank Furness: The Complete Works, Princeton Architectural Press, 1996) assembled a strong team of researcher/writers commissioned by the Society of Architectural Historians to focus exclusively on the eastern region of Pennsylvania. (Originally conceived by architectural historian William Pierce, the series Buildings of the United States is compiled and written on a state by state basis.) Thomas’ team fanned out to collect fresh information and photographs for a rich architectural compendium that is hardly the dry telephone directory one would expect from such a broad survey.

If you’ve met Mr. Thomas you know he’s a salty fellow who doesn’t pull punches. After praising Furness’ Undine Barge Club as a “gem,” for instance, he goes on to say, “Unfortunately, the unchecked expansion of clubhouses in the late twentieth century has marred the gracious punctuation of separate structures to produce an effect uncomfortably like an unzoned Mediterranean beach.”

Or, of one of my favorite architectural piñatas, the Kimmel Center for Performing Arts, a paragon of urban insensitivity he describes as having the “ungainly grace of an aircraft carrier.”

Needless to say, I found myself cheering or arguing with George as I flipped through the book seeking his analyses of buildings I already knew…and that’s just one way, the candy store approach, to partake of this book’s offerings. 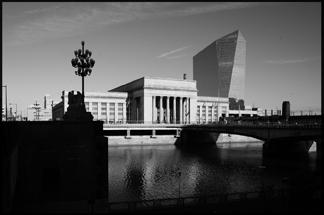 Inevitably, in a survey of this scope, prized architectural works such as Frank Lloyd Wright’s Beth Shalom Synagogue in Elkins Park or Paul Cret’s Rodin Museum in Philadelphia, for example, are given only modest attention. A few economical paragraphs were, apparently, deemed sufficient. This is not a greatest hits album, however. Perhaps, he just needed a little extra room on page 342 for the nuclear reactors at Three Mile Island.

Not I. An architect with opinions? Yes. But not an Architectural Critic. My angle in this book review has as to do with usability as well as content. Google’s instantaneous access to information has rendered most of us pathologically impatient. A book such as this has to at least be an enjoyable and efficient vehicle for obtaining new knowledge–it is.

Aided by the book’s clear maps and designations and your handy GPS, you can scope out any of these structures easily.

A pattern of mini-treatises followed by photographs with brief analyses is how the book is structured throughout, county by county. It’s like dipping into one of Thomas’ lecture courses at will. You can then march yourself across the regions outlined in the book and come away far better informed about architectural origins and cultural trends.

So what else can you glean from your shiny new Pennsylvania architectural companion/guide?

When you drive across Pennsylvania and the road physically cuts through mountains, telling geological strata is revealed. Thomas explains how that strata comes to inform the local architecture. He gives a full page explication on how geological variation is not only an architectural determinant in different parts of the state, but bordering layers of stone can find expression in a “striking polychromy” within the same house! “The peculiar colors of the local sandstones make a drive through the state a vivid experience,” he beckons.

But as a cultural historian, Thomas is most intrigued by the ways immigrants have re-created architectural strands of their own heritage. Indeed, the core narrative of the book is how major migration groups–English, Welsh, Scots, Germans, Eastern Europeans, and a certain group of Connecticut Yankees who defected–have left traces of their cultural values. We can read the influence of Germans in the landscape, for example, in pent eaves and contour plowing, and, he says, “above all, high spatial order.” The result, writes Thomas, is that,

the regional character of the architecture of eastern Pennsylvania has a remarkably clear identity…[in a] [f]usion of forms and details that represented different peoples and the intermixing of building types and materials…differing in their variety from the unified styles that represent the mono-cultures of New England and the plantations of Virginia and the South. 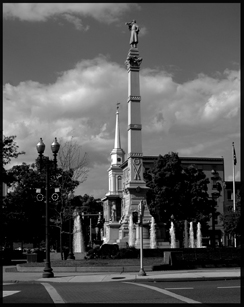 Thomas opens our eyes to penetrate the built landscape. He is, in fact, an architectural historian but finds that label too restrictive. He can deconstruct a building with the best of them but, as a cultural historian, his reach is now both broader and deeper. The beauty of this book is that many of its insights and disciplines of mind are applicable to any state in the Union!

I caught George Thomas by phone for a quick pick from the book, an absolute “must see.” His immediate answer: “Route 6,” the road that runs east/west, connecting Milford, PA and Bradford County. Thomas says it is an amazingly rich architectural vein. In Milford, particularly, you’ll find buildings by Richard Morris Hunt and John LaFarge, spillovers from their big reputations in the big leagues of nearby New York City.

To appreciate the implicit urgency of this work, take a look in Thomas’ index under architect Frank Furness, his personal Pennsylvania favorite of the 19th century (and mine). The list of Furness’ building commissions is a yard long. But, at a glance, it’s as if every other entry says, “(demolished).”

Please, don’t get me started. 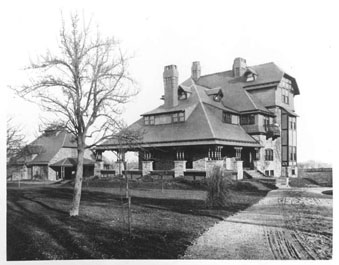 In a last minute switch, all of Thomas’ full color photographs were printed, instead, in black and white–as if someone was afraid the book would not be taken seriously otherwise. Don’t let that throw you. For one thing, even though these aren’t particularly high-end reproductions, black and white is classic. Moreover, George Thomas is a very good photographer with an acute eye for architectural composition and lighting. His verticals are carefully aligned so his photographs never look like cheap drive-bys. I know it’s just a detail, but I’m not surprised. He cares too damned much.