Hippest Street In Town, Circa 1766

Editor’s Note: This is the first in a series of articles by Jack McCarthy (and others) tracing Philadelphia’s music history to places and neighborhoods around the city. 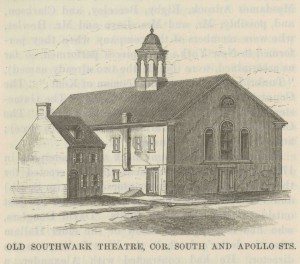 Southwark Theater, on the southwest corner of what is now South & Leithgow Streets; the building on the left remains

When the Orlons christened South Street “the hippest street in town” in 1963 they were about two centuries late. South Street had long been Philadelphia’s edgiest performance district, home to theaters, music stages, and yes, bawdyhouses. The southwest corner of South and Leithgow Streets, between 4th and 5th, the former PhilaDeli and now a shuttered Payless shoe store, is the site of the first permanent theater building in America. Built in 1766, the Southwark Theatre was the center of Philadelphia’s stage life for most of the late eighteenth century. Prior to its opening, theater in Philadelphia developed in fits and starts, with troupes coming and going and performing in various converted or temporary buildings, all the while facing fierce opposition from conservatives who viewed theater as immoral.

A typical stage performance in Philadelphia in the mid to late eighteenth century was a four or five hour affair that included a traditional play as the main feature, followed by a lighter afterpiece. The latter was usually a ballad opera, a humorous play interspersed with satirical songs. Music was an integral part of the evening’s entertainment, with instrumental pieces, songs, and dances performed between acts or serving as preludes or postludes. 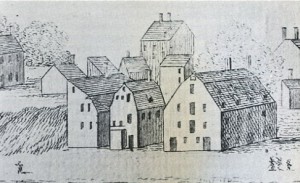 1754 drawing of Plumstead’s Warehouse, on Water Street between Pine and Lombard, site of earliest theater performances in Philadelphia

The first stage performances in Philadelphia were put on by an English company almost three decades before the opening of the Southwark, in a warehouse by the Delaware River, on Water Street between Pine and Lombard Streets. It was a large brick structure owned by William Plumstead, a wealthy merchant who would later serve as Mayor of Philadelphia. After this company left in early 1750, there apparently was no theater in Philadelphia until April 1754, when the Hallam Company, a well-known English troupe, came to town. They also appeared in Plumstead’s warehouse. The Hallam Company left after one season, disbanded for a while, but reorganized and returned in 1759, performing for one season in a building that the company built on the southwest corner of South and Hancock Streets. This building, known as the “Society Hill Playhouse,” was a temporary frame structure built just for that one season.

In 1766, the same troupe renamed itself the “American Company” and built the Southwark Theater. Its front facade was 50 feet wide on South and 90 feet deep on Leithgow, extending almost to Bainbridge Street (see image above). It had a brick first floor and wooden upper floors with a distinctive cupola on the roof. A theater professional of the time described it as “no great ornament to the city” but “of sufficient size for the population…and well adapted for theatrical representations.”

The American Company enjoyed considerable success at the Southwark despite organized opposition from conservative groups. In fact, the Southwark was deliberately built on the south side of South Street, then the southern boundary of the City of Philadelphia, so that the building would be outside city limits and beyond the city’s restrictive policies towards theater. 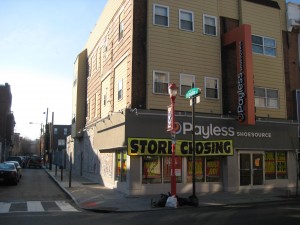 The Southwark thrived until the Revolutionary War, when all theater was banned. The British staged productions at the theater during their occupation of Philadelphia in 1777-1778 and in the 1780s some performances were offered there under the guise of “lectures,” in order to get around the theater ban that remained in effect for several years after the War. With the lifting of the ban in 1789, theater activity at the Southwark revived, but the building’s period of prominence was short-lived. In 1794 the larger, more ornate Chestnut Street Theater opened and soon replaced the Southwark as the city’s preeminent theatrical venue. The Southwark burned down in 1823 and a distillery was later built on its foundation. The distillery was demolished in the early 1900s.