Author’s Note: Special thanks to Bob Thomas, of Campbell Thomas & Co., who had the pleasure of working with Henry Magaziner for twenty years, and recently spent an hour with me telling stories at Henry’s old desk. 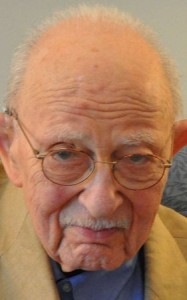 On Christmas day, Philadelphia lost one of its foremost, and inventive, voices for preservation, Henry Jonas Magaziner, who passed away at the age of 100. Magaziner’s inspirational presence as an architect, preservationist, author, and advocate can be felt from Center City to Valley Forge; his single-handed insistence that accumulated architectural history not be wiped out in favor of one period–the colonial–impacted the direction of Independence National Historic Park and federal government policy. His notion that the most effective means of preservation isn’t restoration but instead creative reuse lives on with us today (Hidden City Philadelphia received the 2010 Henry Magaziner Award award, given by the Philadelphia branch of the American Institutes for Architecture).

A proper summary of Magaziner’s career can be found HERE, on the website of the Delaware Valley Chapter of the Association for Preservation Technology, one of many preservation organizations he he helped guide over the course of his professional life.

The son of the prominent architect Louis Magaziner, Henry was exposed to the hidden processes of city building from his earliest days. As a centenarian, he was exposed to five generations of change in Philadelphia, and for much of that time he was devoted to the management of change through preservation.

It’s from Magaziner, who delighted in telling stories, that we’ve gained so much insight into Philadelphia’s architectural history. 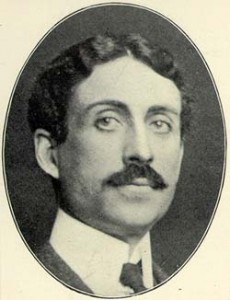 It may be hard to imagine, but one of Henry’s first job interviews, in the early 1930s, was with the famous Wilson Eyre. Henry loved to tell this story. With the depression raging, Henry was forced to drop out of his architectural studies at Penn and look for work. Henry was let into Eyre’s office at 1005 Spruce by Louisa, Eyre’s sister, a well-regarded sculptor, and the office manager. Eyre had his feet up on his desk and was caught up in the newspaper. After about ten minutes, Henry cleared his throat, at which time Eyre folded his paper down to see who was interrupting him. Henry said he was there at the suggestion of his father and would like to talk about a job. “Young sir,” said Eyre, “do you think if I had any work I’d be sitting here reading the Times?”

Like most architects, Louis Magaziner’s firm was also without sufficient work, but through his father’s connections with Samuel Fels, Henry ended up selling Fels Naptha soap door to door.

After a few years away from the profession, Henry went back to Penn, graduating in 1936. He worked for the family firm for a couple years before World War II impacted the architectural practice. Henry joined the Philadelphia engineering and construction firm of Day and Zimmerman in 1940 and was relocated to Iowa to assist with the design and construction of the 36 square mile Iowa Ordnance Plant (now the Iowa Army Ammunition Plant). One of Henry’s main responsibilities was to oversee the relocation of two-dozen homes that were on the property. Creatively repurposing the historic farmhouses on the site, Magaziner designed a new village for the plant’s employees. Knowing that the new occupants relocating there from cities across the country had little need for the formal organization of a foursquare plan house, Henry turned his houses around so that their informal rears would face the street. The construction was almost complete when his superiors realized what Henry had done.

They angrily called in a senior War Department official from Washington. Henry was certain he’d be fired but instead was praised for his inventiveness. He continued through the war working in Detroit and New Jersey for war-related architecture and engineering efforts and returned to Philadelphia to his father’s practice in 1946, which was soon renamed Louis and Henry Magaziner Architects. 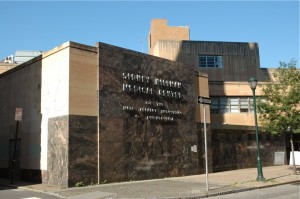 One of their important collaborations was the recently demolished Sidney Hillman Center. A decade or so ago, I managed to coordinate a tour of the building led by Henry. We talked that day about the change in architectural style from his father’s well known art deco theaters, particularly the Uptown, to the aggressive modernism of the Hillman Center. He enjoyed spoiling our theories on why the Hillman was rotated off the city grid. “Don’t be silly,” he laughed, “the crank (rotation) was simply the most cost-effective way we could get the most rooms in a low-rise building on that site!”

At Hillman, Henry’s one regret was the isolation of Eyre’s wonderful Bradbury Bedell Residence of 1889. “Thankfully Sidney Hillman couldn’t acquire it, otherwise it would have come down. Did I ever tell you how I met Eyre?”

Henry took over the practice after his father’s 1956 death, and preservation became one of his primary interests. He restored many buildings in Germantown and in Society Hill, but frequently remarked on his disappointment that Philadelphia’s 19th century history was being cleared for a sanitized and untruthful presentation of colonial architecture. He didn’t just grumble about the loss of Victorian architecture–he acted. Magaziner led a campaign to save Germantown’s Maxwell Mansion from demolition for a filling station.

As his “bread and butter” work with the city and the school district waned, he threw his hat in the ring for the position of regional architect for the National Park Service. He got the job in 1972, and helped forge a broader view of preservation for the federal government. 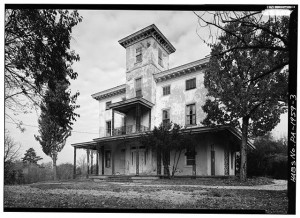 During his 16 years at NPS, Henry oversaw restoration and repair of dozens of National Historic Landmarks and he enjoyed the collaborative process with other architects. Early on, he was sometimes surreptitious to advance preservation. He nominated the Kennedy-Supplee Mansion in Valley Forge National Park for National Register status when its future was uncertain. His displeased supervisor then charged him with figuring out how to make the building useful. For a number of years, it remained residential and was adaptively re-used as a restaurant in 1986. Among his many accomplishments, perhaps the most significant was his successful lobbying to institute a GSA policy requiring federal agencies to study the opportunities to re-use existing buildings prior to constructing any new building. 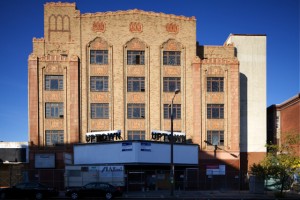 Henry retired from the NPS in 1988 and joined the architectural practice of Campbell Thomas & Co., where he worked until just a few years ago. He also published two books: The Golden Age of Ironwork, a scholarly examination of the broad history Philadelphia’s ironwork, and the delightful children’s book Our Liberty Bell. He was delighted to see renewed attention for the Uptown Theater, one his father’s most beloved buildings that he assisted with as a young man. Henry continued to advocate for a broad view of conservation, one that encompassed both historic preservation and environmental sustainability. He advocated for appropriate material conservation methods and believed strongly that the best way to preserve buildings was to keep using them.

Shawn Evans Shawn Evans is Director of Preservation and Cultural Projects at Atkin Olshin Schade Architects. Shawn and others at the firm assisted with the 2009 Hidden City Festival documenting improvements and facilitating approvals for the Metropolitan Opera House. Raised in Ohio and Texas, he has lived in Philadelphia since 1993 when he began graduate studies in architecture and preservation at Penn. Shawn and his family live in Bella Vista. He is the current co-chair of AIA Philadelphia’s Historic Preservation Committee and sits on the Architectural Committee of the Philadelphia Historical Commission. Shawn has also blogged for phillyhistory.org.