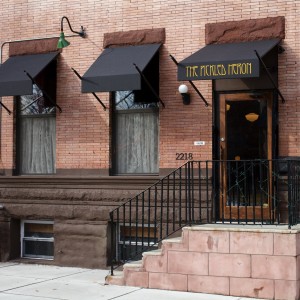 Northern Liberties-based Domani Developers, about to break ground on Stable Flats at George and American Streets, has nearly a dozen projects completed, in progress, or proposed around the intersection of Frankford and Girard in Fishtown. Further up Frankford Avenue, Little Baby’s Ice Cream and the pizza shop Pizza Brain will be opening next spring. Filling in the middle of Frankford Avenue, the Pickled Heron, a BYO serving French fare, opened at the beginning of this year, and several other properties nearby have recently been purchased for commercial use. 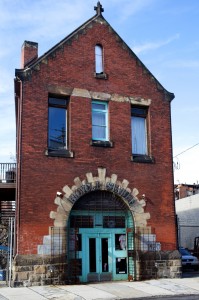 “People drove really fast in order to get through here,” said Pyatt. Now recent Domani projects along Frankford near Girard–Stephen Starr’s Frankford Hall, Lola Bean Café, Amarita Yoga, Art Machine tattoo parlor–as well as Bike Stable and the long-established Johnny Brenda’s, have begun drawing foot and bike traffic up the corridor. Pyatt compares the effects of these businesses to that of a straw, sucking business up from Girard and onto Frankford Avenue.

What’s in that straw, sliding up from Girard to Master Street? Here’s a review:

Domani Developers has proposed a hotel at the currently vacant five-story building, which was originally constructed as a brewery at the turn of the 20th century. After a brief stint as a pickle factory, the building served as a frozen storage facility operated by Arctic Cold Storage Co. beginning in 1925. Developer Roland Kassis, of Domani, envisions that the hotel will be like The Jane hotel in New York, with rates starting at $80 and running up to a couple hundred dollars per night. 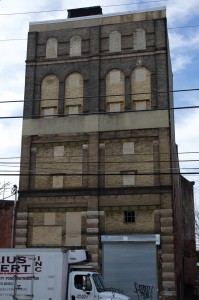 Near Frankford and Mercer, Domani plans to create a 300-seat theater for plays, live music, comedy shows, and dinner, and an indoor, year-round farmer’s market—think mini-Reading Terminal. Prospective market vendors include Baker’s Street Bread, a flower vendor, and of course, local farmers. There are plans for a restaurant and bar to be located inside the market, and Kassis also says that the Liquor Control Board was amenable to opening a retail outlet. Next door, construction will start soon on a salon, dubbed “The Parlor.” The farmer’s market and salon will both occupy parts of the old B & B Dyers complex, which was erected in several phases between 1865 and 1890 as an alcohol and cologne rectifying facility. From the 1920s onward the buildings served as a textile dying and finishing plant, which shut down in 1989.

Domani has also proposed opening a shop for the boutique motorcycle manufacturer Hammarhead, which builds custom-made hogs that run $40,000 a head. The company’s founder and CEO, James Loughead, Ph.D., is an Assistant Professor of neuropsychology at the University of Pennsylvania.

And there is more to come. Domani owns several more potential commercial spaces along Frankford Avenue. According to Kassis, Domani will often sit on a property for a year or more until they find a tenant they believe fits in with their vision for the neighborhood. 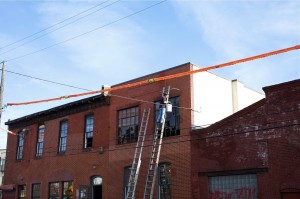 A few blocks beyond the Domani properties, near Dauphin, Brian Dwyer and Joe Hunter will open Pizza Brain in a former flower shop, in conjuction with the opening of Little Baby’s Ice Cream next door. Both will offer somewhat eccentric yet affordable fare.

Other indicators of future development include the recent sale of an old car wash at Norris, and Philadelphia Brewing Company’s purchase of the lot at Hagert located in front of their Brewery. 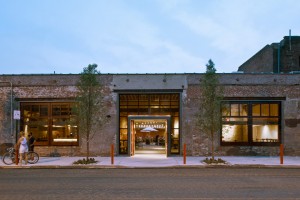 Lest it seems that the all this development is indistinguishable, I hasten to point out that the design, scale, and price points of proposed projects vary. The Domani projects near Girard will continue in the vein of the developers’ past projects on the Avenue, such as Frankford Hall, Amarita Yoga, and the Lola Bean. This means clear-coated brick, rough lumber, and other accents showing bones of old buildings, combined with more modern touches. It also means we can expect, at least to some degree, slightly higher price points. Further up the avenue, in a section of the neighborhood that still has a considerable number of vacant properties, a less flashy aesthetic has been maintained (even in the scattered residential development), with most businesses opening up in buildings in situ while offering products priced consistently with those of older neighborhood establishments. 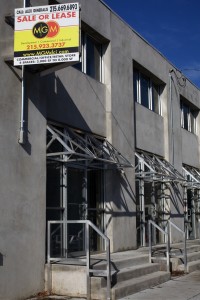 Do these developments serve as a microcosm of larger demographic trends in Fishtown? Depends who you talk to. While Kassis says that his projects are both citywide destinations and neighborhood places, Pyatt confirms that there certainly has been an increase in real estate values in the area around Frankford and Girard, an upward trend that dates back to the opening of Johnny Brenda’s in the early 2000s. There’s no denying that the neighborhood is experiencing “growing pains,” but, he adds, “this is a market economy, not a controlled economy.”

Johnny Brenda’s co-owner Paul Kimport points out that the monolithic label of “gentrification” does not accurately describe recent changes in Fishtown: the housing stock and open space available for development are limited, he observes. These conditions foster a more restrained level of development, preventing the neighborhood from being dominated by new construction projects, as has been the case in nearby Northern Liberties. 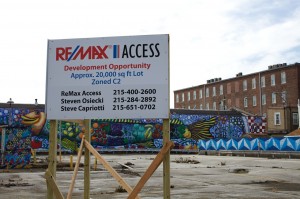 As for predictions looking forward, Kassis believes that in three years Frankford Avenue–1990s progenitor of the strategy of using grass, trees, and wooden fences to manage proliferating vacant land–will be unrecognizable. Drag racing and short dumping of trash will be only a distant memory. Pyatt shares a similar vision, but does not believe that the flashier architectural characteristics of Domani’s projects near Girard, with their higher cost per square foot, will necessarily extend all the way up the corridor. Supporting this speculation, Pizza Brain, Little Baby’s Ice Cream, and the Pickled Heron have stationed themselves in existing buildings without extensive exterior renovations, allowing them to blend comfortably with the surrounding fabric of the neighborhood.

According to Pyatt, the next step in solidifying Frankford Avenue as a retail district is to string together the two main nodes of commerce on the avenue. He is encouraging this process along with the rest of the economic development Department at NKCDC by marketing available properties and entreating Frankford Avenue property owners to consider renovations amenable to commercial use during the zoning process. 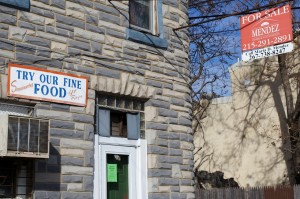 Kimport adds that in order to maintain the neighborhood’s sense of place and avoid displacement in the long run, policy change is necessary to prevent the real estate market from inflating prices. “There needs to be land value-based taxation for Philly,” he says, “or speculators will keep it from being what it could best be.”

Beyond participation in the community planning process, in this neighborhood community zoning meetings serve as the last venue for input from residents hoping to influence local development proposals. Last week, the Fishtown Neighbors Association (FNA) community zoning meeting unanimously approved the two variances will allow Little Baby’s Ice Cream to open their scoop shop and ice cream manufacturing location on Frankford Avenue. After Little Baby’s scooped up their community approval, a proposed two-family dwelling on a single-family lot received an overwhelming vote of opposition on the grounds that it “didn’t fit with the neighborhood” and would increase density to the inconvenience of neighbors. If this meeting was any indication, the community is both embracing (at least some) new commercial development while attempting to maintain the qualities of the neighborhood that predated the commercial revival on Frankford Avenue.

The community zoning meeting for the proposed theater, motorcycle manufacturer, hotel, and farmer’s market have yet to occur. If you live within the Fishtown Neighbors Association boundaries and would like to hear more details about the projects and weigh in, keep an eye on www.fishtown.org for the announcement of the community meeting date and time.