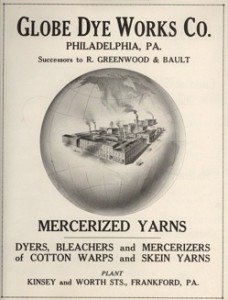 Until closing in 2005, Globe Dye Works’ hulking complex in Frankford was a major player in the dyeing and bleaching industry. Maintained by five generations of the Greenwood family, Globe Dye produced skeins of yarn and spools of thread for use across the world in everything from clothing to upholstery. Its closing left more than 145,000 square feet of industrial-zoned space across 12 buildings just waiting for an ambitious suitor.

In addition to luring in photographers and urban explorers with its irresistible lofty spaces and rusting, vintage machinery, the Globe Dye complex also caught the eye of a group of seven investors, most of whom had other large Frankford building renovations under their belts, who came to call themselves the Globe Development Group. Armed with a master plan issued by architecture firm DIGSAU, Globe Development Group is renovating the space as a bustling creative compound with exhibition and studio space for Philadelphia’s arts and small manufacturing scene. 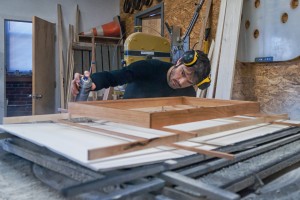 The building has also attracted a boat-building nonprofit, a hard cider maker, a chocolatier, and a handful of white collar tenants. So far at Globe Dye, the group has developed about 60,000 square feet. Now as the project moves beyond the halfway point, I sat down with the group’s two hands-on partners, Charlie Abdo and Peter Kelly, for a status report.

Dominic Mercier: What made you take on such a huge project?
Charlie Abdo
: We always used to notice Globe Dye Works and were wondering what was going on behind the doors. When we first got up here it was still operating, so you saw a little bit of activity, but not much. Then we heard it was for sale. We came through, just out of curiosity, and in the long run we just fell in love and got sucked into the industrial charm more than anything else.

We would come on a sunny day and we would think, “You know what, we could do a project in here”–this was after about five or six trips and it had become more familiar. And then we’d come by on a rainy day and it would be bitter cold, and it would be leaking from every opening and we’d say, “Oh, no way.” But finally, we struck a deal. The only problem was Globe Dye Works was so indebted to the city that we had to work with the city to forgive and manage some of the debt. And that was a big obstacle.

DM: What’s happening now that you’re moving into the second phase of development? Are you tackling the project building by building? 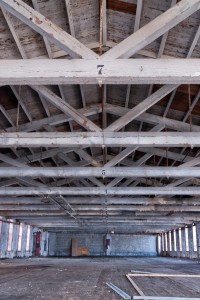 CA: That’s the way we’d like to approach it. The bigger demand is dealing with the infrastructure. For us, at this point, it’s more stabilizing the roofs than anything else. We had a big push over the summer, spring, and fall to do that. So we’re ready to move into some other buildings, and that would be the Kinsey Street selection of buildings, which are the oldest. They’re now under roofs and we’ve stabilized trusses and beams. We need to raise a little more capital and then we can go to town.

Peter Kelly: We have a lot of space that is finished and rented. In a building this size, it’s surprising how much space is what I’d call non-rentable space. When they talk about this property being 150,000 square feet of floor space, they’re counting everything, stuff that you could never rent. Even on the floors that we do rent, like if we have a 6,000-square-foot floor in a building, by the time we put in hallways and staircases, you may have 4,000 rentable square feet of space. You really have to get into it to see what’s rentable, what’s a common area, which adds value to the rentable space but is not income producing. Like our entire boiler room complex, which is about 8,000 square feet of space that we’re holding for the occasional exhibition or special event. But we see it more as an art gallery that adds value to all the other rented spaces.

DM: What has the transition been like from something so huge and industrial to where you are now? What happened to all the old machinery?
CA: It’s been a little weird. We have 25 tenants at this point, but we’re still in construction mode. It’s a little difficult at times being good business managers and also trying to develop a property as well. 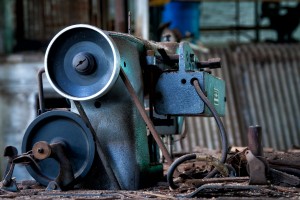 There’s not much machinery left. When we first came in, it was like they hung up their coats and walked out. And that’s what really sucked us in. It was a beautiful place. There was some newer machinery but mostly vintage machines. We would keep taking the machinery and moving it to a section, and renovate the section that we moved it from, and kept moving things around. Slowly over the years, we’ve had no choice but to sell or scrap whatever was here.

DM:In addition to artist studios, and manufacturing, exhibition, and performance space, is there a live/work component to the project?
CA: There ultimately will be. But looking at the bigger picture, and what’s going to separate Globe apart from other repurposed projects like this, is that we really hope to generate commerce. So there will be studios and there will certainly be a big arts component, but hopefully there will be an even bigger commerce and business component. We have a good 50,000 to 75,000 square feet of good industrial space. Even at this point, we have a bunch of small businesses that already set us apart, and we’d love to see some manufacturing.
PK: We have the ability to have a much more diverse tenant base here. There’s a lot of synergy that goes on between the tenants. Even a tenant who is a pure artist, they’ll go the woodworkers in the building to stretch big frames for their canvases. We joke about it, but we talk about having an event here and the entire event could be produced by the tenants. It’s exciting to see the interaction between them.

DMHas there been any difficulty in attracting tenants?
CA: I think the first 10 tenants was maybe a little bit of a struggle. But since then it really hasn’t been. We have a good reputation and we’re a better value than places closer to town. Everything that is rentable is rented and has been that way for the past couple of years. 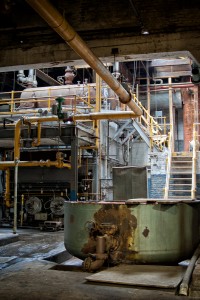 DM: Is programming and special events going to be key to the success of the project, or do you see it as an ancillary benefit?
PK: Usually it is someone who comes to us and says they want to do a show here and we’re very receptive to doing it. We participated in [Philadelphia Open Studio Tours] this year. But it wasn’t until just this summer that we got a new roof on top of the boiler room and that space really wasn’t weather tight. We’re getting to the point now where we can finish that space and think about using it.
CA: We’re looking forward to when we have someone dealing with the programming and special events. Right now we just fit it in, which is one reason why exhibitions have been few and far between. It’s not something we’re aggressively pursuing, and, also, we’re not quite ready to do it in a bigger way. Ultimately, will we be as active as Crane Arts? Probably not. But there should be something going on here at least once a month.

DM: One of the things DIGSAU laid out in the master plan was a focus on sustainability. Is that still something that you are working toward?
PK: When we replaced the one roof in this complex that is most conducive to a green roof, we built it to specs that could accommodate one. When we do make improvements, we try to make them in a way that will allow us to do the other sustainable stuff down the road. Frankly, a lot of it is money. We’re still at that tipping point of trying to get enough tenants in here to break even and then we can start getting ahead of ourselves.