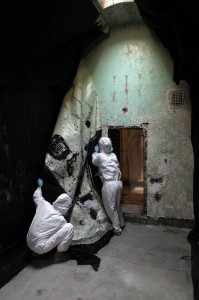 A stage in the printing process

Spanish artists María Jesús González and Patricia Gómez practice a deceptively simple form of architectural documentation. Using a process first developed by fine art conservators to restore murals and frescoes, the pair make life-sized “prints” of architectural spaces: first, they coat a room entirely in a special adhesive, then cover it entirely with a special cloth. When the adhesive is properly set, they peel the cloth away, taking with it the surface materials of the room itself—layers of paint, bits of plaster, the ghostly outlines of windows, doors, outlets and grills. It is printmaking in its most elemental form, with the architecture itself doubling as both plate and ink.

It is also architectural preservation, though of a sort that, like architectural salvage, carries a heavy load of ethical implications in its inherently disruptive and invasive nature. For when they peel their cloth away, if their print is a success, part of the room’s essential character is carried off with it.

To their credit, González and Gómez recognize this dilemma and choose their subjects accordingly, focusing on buildings slated for demolition or which suffer from rapid and irreversible deterioration. Such is the case at Philadelphia’s Holmesburg prison, where the pair have just completed month-long residency commissioned by local arts organization Philagrafika. The work will be on exhibit starting Friday at the Galleries at Moore (for more information on Friday’s opening and the exhibit, click HERE). Holmesburg, which opened in 1896 in Northeast Philadelphia, was a fully functioning city prison until its closure in 1995. 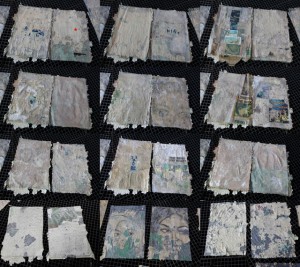 Though there are no formal plans for its demolition, it is deteriorating at an exponential rate. In 2005, photographer Thomas Roma published In Prison Air: The Cells of Holmesburg Prison, documenting cell wall drawings and other marks that prisoners left behind as traces of their incarceration. Today, the majority of these traces have crumbled to dust. (Holmesburg is also a potential site for the 2013 Hidden City Philadelphia Festival. For Chandra Lampreich’s photo essay on Holmesburg in the Daily yesterday, click HERE.)

This palpable sense of time and decay is, of course, a major part of the abstract aesthetic allure of places like Holmesburg, but it is only one aspect of González’ and Gómez’ work. Another is their sincere desire to systematically document—to “archive,” as they describe it—the vanishing traces that remain. 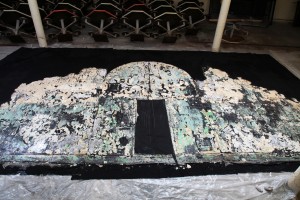 Print in the cafeteria during the fixing and sealing process

Both approaches—the abstract and the particular—are apparent in the work now on display at Moore College. Accompanied by photographs and videos which illustrate their process and help give context to the project, two sets of the artists’ “prints” are displayed. “Without these,” says González, “people might have no idea what they were looking at.” One set consists of enormous black canvases spread across the floor, fractured layers of paint outlining the shapes of a cell’s walls, ceiling, and lone door. It is Jackson Pollack meets Rachael Whiteread—a chaotic two-dimensional map of a three-dimensional space. The other set consists of drawing fragments and other graffiti lifted from cell walls in smaller bits and pieces, reassembled palimpsest-like on the gallery wall. It is as if Duchamp chose the bathroom wall itself, instead of the urinal, for his famous Dadaist readymade.

From a technical perspective, the process and its results are fascinating. But they are also deeply unnerving, given the troubled history of the prison itself. For decades, Holmesburg inmates were subjected to clandestine medical testing by University of Pennsylvania dermatologist Albert Kligman, Dow Chemicals, and Johnson & Johnson. Describing his first visit to Holmesburg in a 1966 interview, Kligman said “All I saw before me were acres of skin. It was like a farmer seeing a fertile field for the first time.” This is treacherous territory for any artistic endeavor, especially one that so blatantly uses the metaphor of “skin” to describe architectural surfaces. While Holmesburg is the pair’s first project in the United States, it is not the first time they have worked in prisons. Asked how this experience was different from others they have documented, the artists were frank: “This was the most difficult to work in,” they agreed. “It was an overwhelming experience.” Moreover,

We want the viewer to come to their own conclusions about what being in this place might feel like, and we want to find a way to communicate this space in a different way than, say, a photograph would. You don’t get the same feeling looking at a photograph on paper than you do from seeing the actual decaying paint, the actual size of the cell.

In this way, their work has the potential to transcend a simple fetishism of decay to explore the differences between different spaces. “The first time we did this kind of project inside of a prison, we thought that we had depicted what prisons feel like,” said the artists. “When we had the opportunity to do a second prison, we realized it was completely different. There were many similarities, but it was a different feeling. The third was even different from the first two. Apart from the ‘official green’ that seems to exist in all prisons everywhere.”

Our interview was conducted through an interpreter, with both artists adding thoughts and observations in a back-and-forth dialogue that, by necessity, was compressed into one voice by a translator whose acumen in parsing the nuance of words was admirable, if also inexact. In a way, it was the perfect mode of communication for the project itself, where both message and messenger remain elusive. Who is the real creator of these prints: the prison architect who to gave form to the spaces themselves? The maintenance men who painted and repainted and repainted them? The prisoners who personalized them? Time and decay itself? Or González and Gómez, who rolled it all up on sheets of canvas so that people who would never otherwise step foot inside Holmesburg Prison could catch a glimpse?