A Day In The Possible City 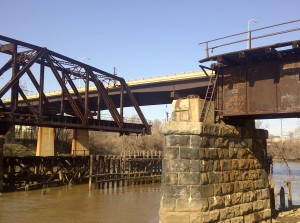 I took the wife and kids and some good friends to the Possible City on Saturday. I assure you, no one wanted to return home.

We started on Wharton Street in Grays Ferry, in the shadow of Thomas Jefferson’s old estate, at the new southern-most entrance to the Schuylkill Banks. Here, Isaak and his friend Elena, both 9, and Jimmy Z and I, discovered life along the Hidden River, as it might be. The folks at the Schuylkill River Development Corporation have installed the familiar plantings and lamps and interpretative signs, benches, and bike racks. 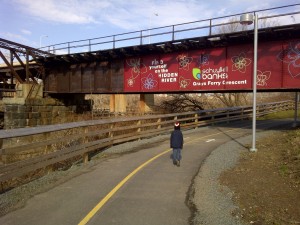 The new trail heads north around what’s been known as the Dupont Crescent (after the paint factory that occupied the site until 2009) and is now, once again, called the Grays Ferry Crescent. The city’s Parks and Recreation department rebuilt the marsh, meadow, and forest there, and gave us views of the Mill Creek sewer outlet and Woodlands Cemetery across the way. The trail goes below the Grays Ferry bridge, where a connecting trail takes you up to the bridge and across river to what will be a new section of trail to Bartram’s Garden.

Keep going and a bulk of this region’s biotech muscle appears, glimmering–a second skyline and perhaps the key to the city’s future economic development. The trail ends for now at the carefully restrained beaux arts 34th Street drawbridge. Soon enough it will continue, on boardwalk to the rest of the trail heading north at Locust. 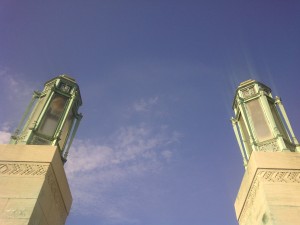 But that elegant bridge itself has a critical role to play here. In the long search for a good pedestrian bridge over the Schuylkill–one that’s architecturally pleasing, at least–we may have found a powerful answer. Just south of the bridge is the old Dupont paint factory for which the crescent was once named. It’s owned by the University of Pennsylvania now, and as such presents a real opportunity for economic development that exploits the medical and research science behemoth across the river. More soon on that as the next phase of Penn’s master plan is unveiled.

City deputy mayor for economic development Alan Greenberger and others dream of redeveloping the lower Schuylkill for research and development and biotech–green industry that will make us forget the certainly closing Sunoco refinery. The crescent, if developed right, will draw on the R & D energy (and the fat research grants) across the lovely bridge and down the river, now, already open for recreation.

If you want to head there, plan to pick up an eggplant parm at Joey Giusepp’s, at Warfield and Wharton, near 34th Street, and picnic on one of the SRDC’s signature rust-colored boulders. The sandwich alone is enough to carry you away. 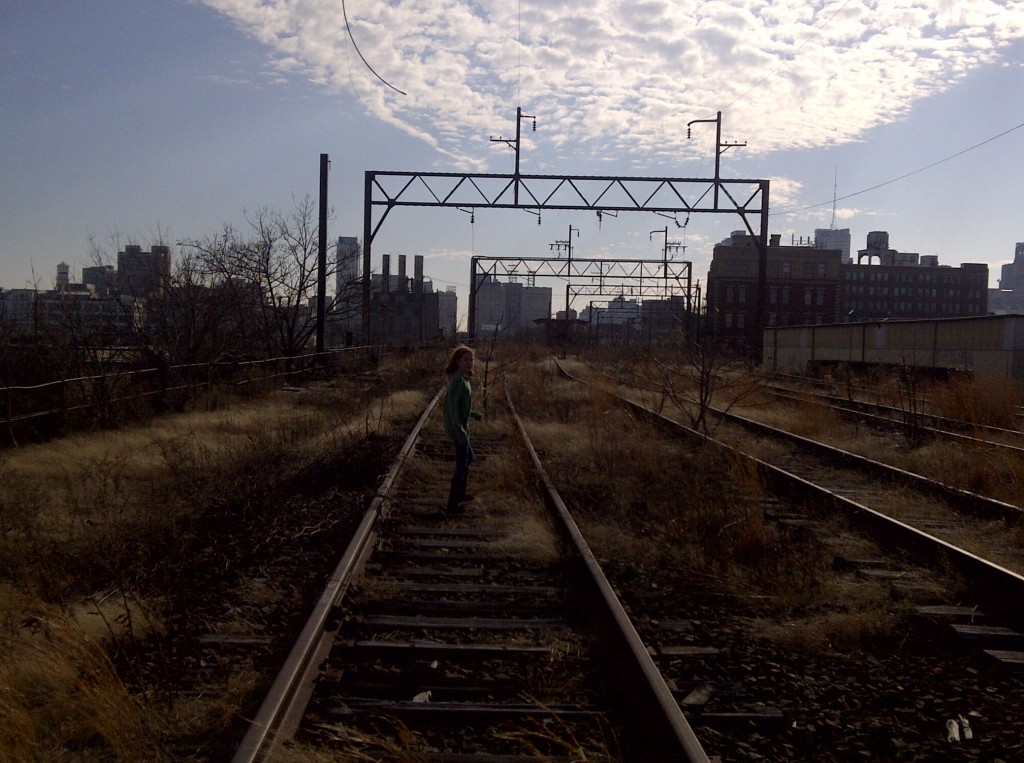 From there, we momentarily returned to the Actual City, ducked past the car show, picked up the rest of my peeps, and landed at 13th and Noble. From there we launched into the sky, through the recently shorn meadow of the City Branch railroad and up, up, up to the terminus of the Reading Viaduct. This was a hike of joy and discovery, as none of my companions had been there before. 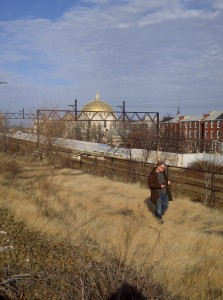 What more to say about a sunny, warm afternoon on the Viaduct? The Post Brother’s Goldtex (Big Green Arrow) building, at the southernmost edge of future park, has been gutted, and some studs installed on its way to being prime residential real estate. My daughter Lena, 12, found herself dreamily swinging above Regional Rail trains sauntering by. Jimmy Z couldn’t take his eyes from the gold dome of the Ukrainian Catholic cathedral, and I blabbed on about the old Reading Station at 9th and Green, now barely hidden inside a graffiti dress, dried grasses–Van Gogh’s yellow–drifting in the breeze. 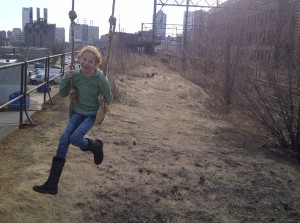 “Aren’t you glad,” Elena said to me, “I made everyone come here?”