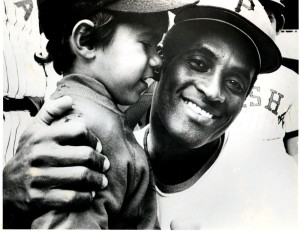 Most of us have heard of Roberto Clemente, the star right fielder for the Pittsburgh Pirates; some of us even remember the tragedy of his 1972 death in a plane crash while delivering supplies to earthquake victims in Nicaragua. But what of Rudolf Walton, George W. Childs, Ada Lewis, Elizabeth Gillespie, or Simon Muhr?

Each of them, and Clemente, had a Philadelphia public school named in his or her honor–a now vacant school that city controller Alan Butkovitz has recommended for demolition. (See Rachel Hildebrandt’s Soapbox arguing that most of these schools should be saved HERE.)

Some former students, we suspect, won’t miss these buildings. However, for so many others the demolition of the schools would mean severing a real connection to neighborhood and childhood. And for the rest of us in the broader city, it would also mean losing strands of history memorialized in the names themselves. (Somewhat differently, Roberto Clemente Middle School moved to a new building in 1996, maintaining the connection between Clemente’s inspiring life and the largely Latino school community.)

So who are these once celebrated Philadelphians? 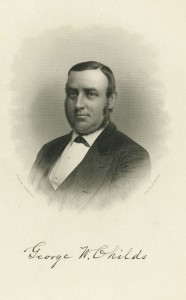 Both the 1901 Rudolph Walton School, at 28th and Huntingdon Streets, and the Simon Muhr School, erected a year earlier at Twelfth Street and Allegheny Avenue, were named in honor of local merchants and manufacturers. In 1879, Muhr founded the Philadelphia Straw Braid Sewing Machine Company, which evolved into the San-knit-ary Textile Mills in the early 20th century. Walton manufactured hats. He also served on Philadelphia’s Board of Education during the 1890s and his namesake school opened a year after his death.

George William Childs (1829-1894) was certainly better known in his time than either Walton or Muhr. Born to a poor family in Baltimore, Childs joined the navy at thirteen and after serving for slightly over a year, moved to Philadelphia and found work in a bookstore. Childs eventually got into publishing, successfully enough that he and his good friend Anthony Drexel were able to purchase the Public Ledger in 1864. Childs’ hard work turned the unprofitable newspaper into one of the country’s most influential. He served on the board of Drexel Institute, contributed to philanthropic causes, and along with Anthony Drexel developed real estate property along the Pennsylvania Railroad’s Main Line. 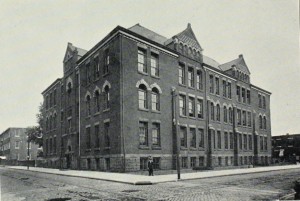 George W. Childs School, photomechanical reproduction of a September 24, 1913 photograph by Franklin D. Edmunds in Franklin Davenport Edmunds. The Public School Buildings of the City of Philadelphia from 1890 to 1899. Philadelphia, 1930 Library Company of Philadelphia

The George W. Childs School at the corner of Seventeenth and Tasker Streets, opened in the fall of 1894, several months after Childs’s death. Originally designed with fifteen classrooms, an additional six classrooms were added prior to the school’s opening, raising the building cost to approximately $84,000. While steam heat kept the students warm in their classrooms, a trip to the bathroom proved frigid until a 1926 building renovation. The number of children in this South Philadelphia neighborhood must have continued to grow since in the late 1920s eighteen more classrooms, three unspecified rooms, and an auditorium were all added to the building.

Far fewer Philadelphia schools were named after women than men in the history of the city’s public schools, but Elizabeth Duane Gillespie (1821-1901) was honored with the opening of a junior high school bearing her name in 1926. During that year Philadelphia hosted the country’s Sesqui-Centennial Exposition, and recollections of the pioneering work Gillespie had done for the Centennial celebration in 1876 may have prompted her name to be considered for a school. 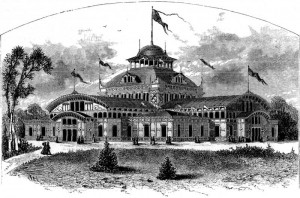 Gillespie, the great-granddaughter of Benjamin Franklin, served as the president of the Women’s Centennial Executive Committee. It was persistence that got a Women’s Pavilion highlighting female achievement and industry (and political and economic empowerment) erected on the Fairmount Park exhibition grounds. Gillespie had done similar fundraising and organizational work for Philadelphia’s Sanitary Fair, which raised over $1 million for Union troops during the Civil War. Located in the 3900 block of North 18th Street next to Simon Gratz High School, the school served pupils until very recently. 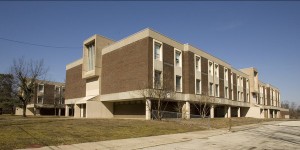 The rigorously contemporary 1973 Ada Lewis Middle School is perhaps one of the most architecturally important vacant schools on the city controller’s list. Lewis herself might also represent the strongest historical connection to the contemporary city. An early Penn female Ph.D. (1928), she taught at Girls’ High School. Later, as vice president of the Philadelphia School Board, she wrote the “Lewis Report,” guiding the racial integration of city schools.