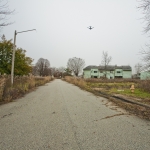 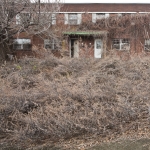 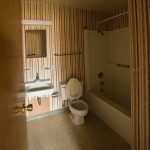 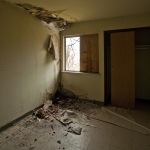 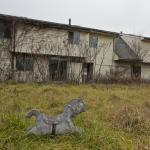 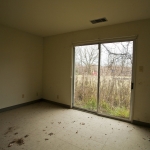 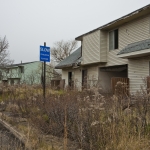 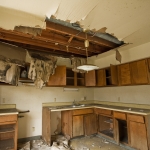 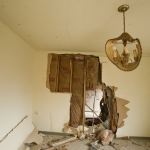 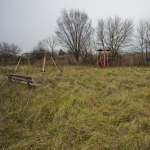 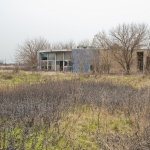 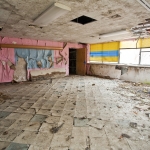 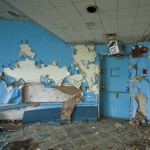 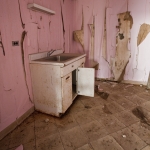 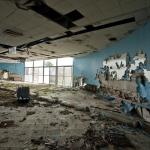 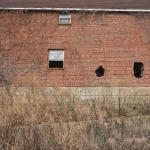 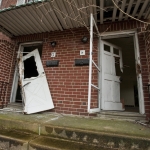 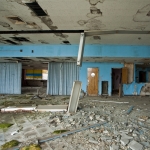 Editor’s Note: Buildings start to deteriorate quickly after being abandoned. Within a decade or two, paint starts to peel off in sheets, ivy tears at brick and termites munch wood. Water, the great infiltrator, leaves collapsed ceilings and rotten floorboards in its wake.

The recent vintage of the Navy Yard’s Mustin area housing photographed here (built from the 1950s to 1980s) brings this truth home. Most of the military personnel and their families left in 1996, with a few people remaining in their homes until 2000. Of course, time and nature received some help–not even an army of carpenter ants could bore holes in concrete block like those left by the demolition and SWAT teams that used the buildings for training.

There is something unsettling about these scenes of desertion and decay. They cannot be consigned to the safety of the distant past, like a crumbling, 19th century factory or row house in a dilapidated urban neighborhood.  Nor can they be easily romanticized, for much the same reason. The formica counter tops and brass chandeliers, the street sign that warns of children playing, the backyard swingset glimpsed through sliding glass doors belong to an era that is still very much with us. These scenes suggest the safety, prosperity and banality of post-war suburban life, and to see them going to seed is a reminder of the transitory nature of things.

The Mustin housing is slated for demolition on December 27th, but apparently could be postponed if a bald eagle returns to its nest on the property. What would be Pennsylvania’s largest marine terminal–the state funded South Port–is planned for the site.