They Never Sing In Public

Editor’s Note: This year’s Hidden City holiday party is being held at the private Orpheus Club. Don’t miss this chance to visit the Club’s “memento-crowded” home, and breathe some of its 19th century atmosphere.

The Orpheus Club is the oldest men’s singing group in America, and has survived, more-or-less unchanged from its founding in 1872 to the present day. The club is the product of “Old Philadelphia” society, which even as late as 1963 Nathaniel Burt could call “one of the few, if not the only, still-established hereditary oligarchies in America, perhaps in the Western World; certainly one of the few whose  tenure extends without any real break from the early eighteenth century to the present.” 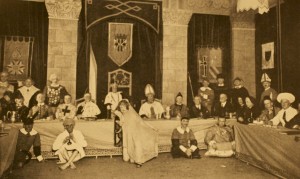 Old Philadelphians still exist, of course, but they are rare, especially in the city, and it is far easier to spot their names on street signs–Chew, Wharton, Morris, Norris, Pennypacker, Cadwalader–than to see one in the flesh. As Burt writes, “a good many of the genuine gentry, particularly the older and ones, might be more or less unrecognizable as such on the street or anywhere else, since Philadelphia doesn’t hold with “distinction” any more than it does with “smartness.”‘

Burt’s The Perennial Philadelphians is to the Old Philadelphia Aristocracy what Roger Tory Peterson’s Field Guide is to birds, although one Old Philadelphian sniffed that Burt could never paint an accurate portrait, since he was from Princeton, and his publisher from Boston.  In any case, Burt had quite a lot to say about the Orpheus Club, and although the club has become more democratic of late, it is worth quoting at length. 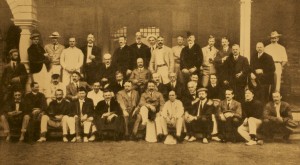 “If you want to get a taste of Philadelphia Gemutlichkeit distilled, one of those occasions when the Orpheus sings for fun–after the annual cricket game at the Merion Cricket Club for instance, or above all inside their own memento-crowded clubhouse–will give you the best possible opportunity; but of course you have to be invited. Like nearly everything else good in Philadelphia this is not for the “public.” The Orpheus, in fact, never sings in “public,” even though their three annual concerts fill the Academy of Music. Everybody is a guest; and on gala evenings everybody is in evening dress, too.

“The Club is divided into two sections. There are the Active members, less than seventy of them, who actually sing, and then there are the Associate members, some 500 of them, who are privileged to go to the annual concerts, with their guests. The Active list is Old Philadelphian enough, but after all one has to be able to sing, ratther than merely be a Biddle. Only two Biddles have made the Active list; but the Associate list is something else again, and Everybody is on that…

“Since the first Orpheus cricket teams were formed in the eighties, the Club has been playing games either with itself (tenors vs. basses) or with outsiders. An Annual Outing of some sort, involving a day of golf, tennis, baseball, cricket, eating, drinking–and singing, has been traditional since the ‘nineties. Now there is an annual cricket game at the Merion Cricket Club between Orpheus and Merion, on the old cricket grounds, the lawn tennis paraphernalia having been removed for the occasion. The best play is inevitably provided by the 70- or 80-year-old veterans of Philadelphia’s great days. This remains the last upper-class cricket game played in Philadelphia, at least outside Haverford College and its occasional opponents. ”