The Art Beneath Your Feet 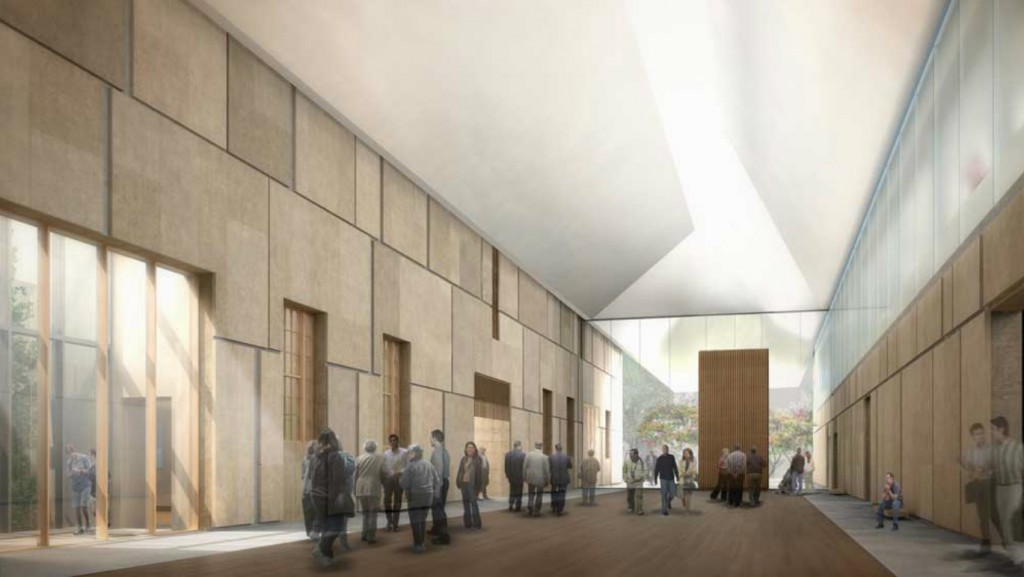 Perceptive visitors to the new Barnes Foundation museum might casually wonder at the fine herringbone-pattern floor boards beneath their feet. Therein lies an interesting story, one that involves a tropical hardwood, a visit to a South American cathedral, and an abandoned section of Coney Island boardwalk.

The Barnes’ design team, headed by architects Tod Williams and Billie Tsien, is aiming for LEED Platinum Certification–the highest standard issued by the U.S. Green Buildings Council. They are thus faced with multiple, interlocking decisions: green systems and materials need to be considered with a thorough understanding of each component’s practicality, up-front costs, and long-term maintenance cost. Barnes project manager Philip Ryan, a senior associate for the New York architects, says LEED certification involves not one big thing, but rather a lot of small details, all working together toward the aim of greater sustainability. Among the visible provisions at the Barnes are parking spaces set aside for hybrid vehicles, a 40,000 gallon rainwater cistern to water the garden, and a photovoltaic solar array on the roof. He also said that more than 90 percent of the materials of the Youth Study Center, the building demolished to make way for the Barnes, was recycled.

Barnes Foundation project executive William McDowell told me that the Foundation had not originally envisioned going for LEED certification. But a phone call from the Green Building Council suggested that Philadelphia would miss an opportunity that other cities, such as Boston and Chicago, were taking. Did Philadelphia wish to be seen as falling behind?

As a result of the push, the Barnes will be only the second major cultural building in the US to aim for LEED Platinum status. McDowell said the challenge of meeting LEED’s strict criteria has served to draw together the entire project design team: its designers, HVAC engineers, electricians, plumbers, and architects.

Wood flooring is often one of the components of green design and typically, FSC certified wood is preferred. (The Forest Stewardship Council is a non-profit that promotes responsible management of the world’s forests.) But while utilizing sustainably harvested wood is certainly a positive step, there is an even better option: the re-use of wood destined for the scrap heap.

The idea to use reclaimed wood for the Barnes floor came from Bob Beaty, the founder of Provenance Architectural Salvage, through a friend and colleague at Driscoll, the construction management company overseeing the Barnes construction. Bob had gotten to know folks at Driscoll when he worked on the job to salvage the historic trusses of the Academy of Music during the construction of the new flyhouse in 2002. 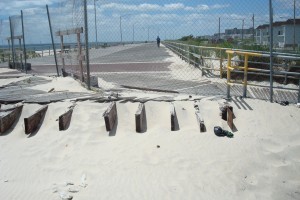 Beaty’s original idea for the Barnes was to use historic lumber that had been salvaged from the suburban Philadelphia farm of the late H. Richard Dietrich, Jr., a leading local philanthropist, collector of American decorative arts, and former trustee of the Philadelphia Museum of Art. Provenance had just recently salvaged the wood from the Dietrich property. Beaty felt that Dietrich’s connection (symbolic and literal) to the Philadelphia art collecting world and the Art Museum might be poetically significant. Eventually, some samples of Dietrich’s historic hardwood were shown to architect Williams, but the wood was rejected.

In 1941, the year of Albert Barnes’ groundbreaking exhibit of the work of Horrace Pippin, the City of New York constructed a section of the Coney Island boardwalk–both its floor boards and also its support beams–of ipê, in what is said to be the first use of this dense, rot-resistant tropical wood for that purpose. Seeing an opportunity, Beaty’s partners at Provenance, Scott Lash and Chris Donna, reclaimed forty thousand board-feet from an abandoned section of the boardwalk that would otherwise have ended up in a landfill. 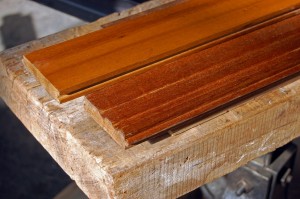 The heavy 4X12 inch ipê beams were carefully milled into 1X3 inch tongue-and-groove boards. The ipê, which has a density only half-jokingly referred to as that of iron, played havoc with the sawmill’s tooling. Provenance’s perseverance in working with the “iron wood” was rewarded when the architects were shown samples of the reclaimed wood.

Using the reclaimed ipê gave them the “warmth, texture, scale and durability we were looking for,” says Ryan, the project architect.

Inspired by the beautifully worn wood floor they saw in a an ancient church while visiting Santiago, Chile, architects Williams and Tsien specified a herringbone pattern for the new Barnes floor. To achieve that warm, gently weathered look that made such an impression on him and Tsien, Williams told me, “now we’ll just need to walk on it for three hundred years.”