Subversion in the Rowhouse City 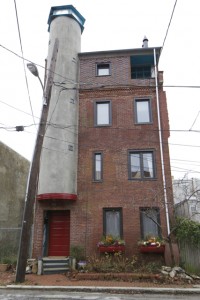 Virginia Restemeyer and E.I. Weiner, the authors of the welcome new book Hip and Hidden Philadelphia: The Unexpected House in a City of Tradition (Probasco Haus Press, 2012, $29.95), open their introduction with a deep sigh:

Yes, Philadelphia is old, and historic, and in many ways still defied by its Quaker reticence and aversion to appearing showy. Those are all true descriptors, to one degree or another; inarguably, some of those traits are what make the city interesting, even endearing.

Like all of us who have grown weary of this withering narrative, which ignores considerable evidence of innovation, foresight, ambition, and (yes) wealth spread over three and a half centuries, they quickly point out there is much more to the story. “Inside Philadelphia there is another Philadelphia…This Philadelphia is subtle and subversive…the true sign of a different way of thinking.”

I will argue that quaint, button-down Philadelphia is the little (small-minded) village inside a much more powerful, resilient, and inventive city. But that’s a question of semantics. What counts is that Restemeyer, a sculptor and Weiner, a journalist and writer, have presented us with forceful evidence of a city of startlingly diverse residential architectural expression, well-beyond the standard rowhouse design. (In some sense, the sheer breadth of the study is evidence of Philadelphia’s markedly few historic districts–the lack of regulatory apparatus allows for invention.) 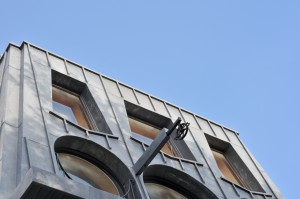 This book is the culmination of years of exploring certain city neighborhoods, from Bella Vista to Mount Airy. The authors walked a great deal, often down small alleys, they paid attention, and they reflected on what they saw. After noticing a pattern of architectural individuality and creativity, they attempted to link the 200 houses (paired down significantly for publication) on their original list of special finds, finally pulling them under the somewhat cloudy rubric of “hip and hidden.” The houses–each illustrated by a few photographs and a short, well-researched and well-crafted essay–are grouped under broad categories (that unfortunately don’t quite cohere): classics, adaptive reuse, incorporated past, facelift, pioneers, etc. 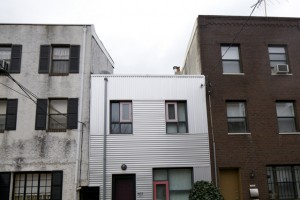 “One great hope,” they write, “is that the book will cause readers to reevaluate or discover, and, in either event, to give proper honor to some of the great architects who have worked in…Philadelphia.” Thus our attention is directed to Hans Egli’s 1981 deconstructed graphic twin (to a Paul Cret original) in West Philadelphia, to Christopher Beardsley’s 2000 Bella Vista tin box, to a Louis Kahn masterwork in Chestnut Hill, and Frank Weise’s Zen modernism in Roxborough.

But the book is much more about personal style than about modern–as opposed to traditional–architecture. In making their case for an alternative narrative of Philadelphia urbanism, Restemeyer and Weiner sought subversion over doctrine; they so often therefore landed on small gestures, adaptations, decorations, and applications of style. This is both the great strength and the weakness of the book–in its subject and its approach. Lacking editorial rigor, the book is above all personal exploration. 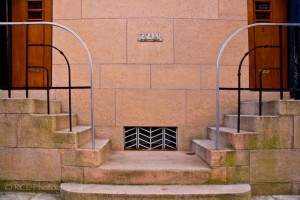 The approach of course points up the limitations of the authors’ range. Restemeyer and Weiner insist they weren’t interested in creating a guidebook (there is no map or addresses given though the houses are indexed by neighborhood), a good thing because so much of the city is left out. Missing particularly are immigrant architectural expressions–the Mediterranean balconies and terracotta tile roofs of South Philly, for example, or the Caribbean colors of Norris Square–meant to subvert the uncomfortable reality of Philadelphia altogether.

In some sense the personal scale of Hip and Hidden Philadelphia feels like the right lens for evaluating this intimate city. But what about so much of Northwest Philadelphia, miles of West Philly, and huge chunks of the Lower Northeast? Here is subversion of the stolid rowhouse on a grand scale, a convincing narrative of diverse, often elegant, sometimes exuberant residential architecture of the 19th and 20th centuries, quite a different narrative we’d be smart to fully embrace.