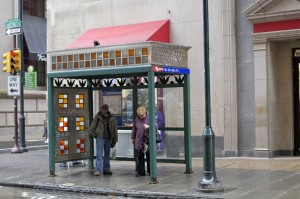 A few weeks ago I sat down with Philadelphia deputy mayor for transportation and utilities Rina Cutler and Mayor’s office of Transportation and Utilities chief of staff Andrew Stober. The expressed purpose was to discuss the future of bus shelters. It turned into a wide-ranging talk on infrastructure and on the city’s relationship to SEPTA. Cutler, who was PennDOT’s deputy secretary of administration under Governor Rendell, is a seasoned political veteran and a bit of a dreamer. “I have a loud bully pulpit,” she says, “and I’m a huge supporter of transit.”

NP: Politically, you have a challenge. The vast majority of transit riders are city residents, but SEPTA’s board is controlled by the four suburban counties (Bucks, Chester, Delaware, and Montgomery). This has been a long obstacle to investing in what matters–transit that makes Philadelphia a more dynamic city.
RC: The biggest problem/goal/challenge is the idea of taking great bones of transit system–that most other cities around would kill for–take these good bones, bring them up to a level of world class transit. I think I share that goal with SEPTA. 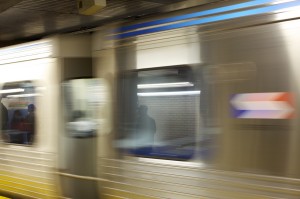 NP: But that hasn’t always been apparent.
RC: There is a long history of tension between the city and SEPTA. Prior to the Nutter administration, we were involved in poking each other in the eye. One of the most positive developments in the past few years is that the inherent tension doesn’t exist anymore. The Board, which can outvote me at any time, is respectful of the fact that the vast amount of rides are in the city. If we are rowing in the same direction a lot of good things can happen.

NP: And SEPTA agrees?
RC: It is my sense they recognize the city can be a valuable partner and the city in turn recognizes that transit is regional. We recognize we’re competing as a region, but also that as the city goes so goes the region. There has always been this notion that city believes that the counties should put in more money, and that there should be more spots on board for the city. We decided early on we’re not going to fight that fight—it’s a Harrisburg fight and it’s not going to help us get better transit. 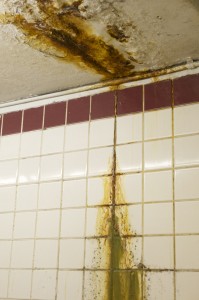 NP: And you haven’t been shy about your priorities.
RC: Well, I only have two. And they said, but they both cost over $100 million each. And I said, I only have two: get City Hall station redone–it’s a disgrace–and install a new electronic fare system. We are going to get to do both. I’ve kept focused on these two issues.

NP: This is in part because of a cultural change.
RC: Well, we still have one foot in old Philadelphia, one foot in new. In part, SEPTA couldn’t innovate because they didn’t have partner behind them. Now, with SEPTA, for the first time we’re jointly looking at operations. We’ve done the first jointly funded application together for Dilworth Plaza. We recreated the Transit First Committee. We’ve spent time investing on operations side–some things we can do at low cost that actually improve service. For a long time you did not have the luxury to step back and plan, we were in survival mode. It has taken a long time to get out of that. I will tell you that SEPTA today is a much strong operational entity than it has been in the 16 years I’ve been here.

NP: And the fare system?
RC: There’s going to be lot’s of hiccups, but once we get people used to it will be amazingly successful. But it’s an open door to discussion about old policies in the mean time–the transfer policy and the male/female pass policy, determining fare zones and peak/off-peak schedules.

NP: I came here to talk about bus shelters. If I was to decide how to invest in transit, I would build bus shelters, with real time bus information, everywhere. Here’s why: the vast majority of SEPTA riders ride the bus. Thus the single greatest cause of stress and anxiety in this city among regular Philadelphians is wondering when the next bus is coming, if it’s coming, if it’s somehow broken down or off schedule. And secondly, without a strong subway system, which is graphically legible–one can look at a subway map and see where he is going–there is no sense to the average person of where SEPTA can take you. It’s invisible. Bus shelters counter that sense of invisibility. So if I was to give a holiday gift to Philadelphia it would be bus shelters run by solar power with on-time and route information.
RC: Your gift would cost $12 million for 600 bus shelters, 300 replacements for the existing ones and 300 new ones. That was our plan.

NP: I thought that ad revenue paid for bus shelter installation.
RC: For some cities these are highly profitable instruments, as outdoor ads share some portion of revenue with the city. And yes, it’s a basic thing in the rest of world, where there is a clear indication of what lines go where. But in 2007 the city was working on a deal for a new contractor and they didn’t finalize the deal. We had to start again in 2008. Then the economy crashed and no one was willing to make investment in new capital. We got zero takers because advertising revenue was not high enough in this market–it’s not LA or New York–and the capital investment is too expensive. So we renegotiated a contract with Titan, renewable each year, and we wait for the economy to improve. We’re getting better maintenance and better revenue. We’re in the trenches with four to five major companies. Are we there yet? We’re in a better place than we were. The economy is ticking up slowly. This is an amenity we’re going to provide, but it has to pay for itself.

NP: But it’s not a priority.
RC: As far as next bus coming? As the city makes the transformation to new Philadelphia, yes. But with personal devices, it’s not evident we’ll need it. To me, a bus shelter is a customer amenity more than a way to transmit information. The vast majority of people on the system are long-term riders. But I started as a newbie and I said how the hell do I figure this out? Like a lot of people, I found the system to be scary–where am I? We have to lead people onto the system with better signage, better communication with customers.

NP: OK, another priority of mine, the extension of the Broad Street Subway to the Navy Yard. People have been advocating for that since 1915.
RC: It’s on a short list of priorities dependent on how we do raising money. Assuming little help from DC or Harrisburg, we’re going to have to leverage funds for the development of the Navy Yard. Same with Bus Rapid Transit (BRT) or light rail on the Roosevelt Boulevard connecting either to the Broad Street Subway or the EL. We need Amtrak to stop at the airport. We have to connect workers and places of employment. We have an opportunity to do some big picture thinking and to get creative about how we solve some of these problems. So we have a $10 billion investment coming in I-95, $6.5 billion in the airport, something like less than $1 billion in the port for Southport, $2 billion in stormwater management–it’s all interconnected.

NP: It all means prioritizing infrastructure.
RC: I am on a mission that says infrastructure funding isn’t a political question. Truly it’s one of the most non-partisan issues ever. Clearly there is something missing in the way we’re articulating the issue.
You can’t not invest in this. We talk about the deficit, poor infrastructure is the deficit we’re leaving our children. This isn’t brain surgery. We’re going to be a developing country—everyone else is kicking our butt. We need to think big, like let’s build an interstate system, let’s go to the moon. Unfortunately, we no longer have the capacity to do these things.