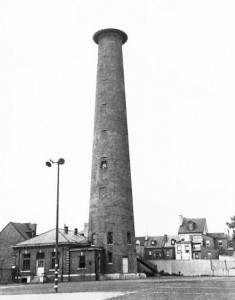 The Sparks Shot Tower is an unusual structure on the 100 block of Carpenter Street in Queen Village. Resembling a lighthouse or factory smokestack with a lid on top, Sparks Shot Tower is thirty feet in circumference at its base and tapers to fifteen feet. This was one of the first lead shot towers in the United States, opening in 1808. Also called the Southwark Shot Tower and the Philadelphia Shot Tower, it is the oldest standing industrial feature in South Philadelphia, as well as one of the last towers of its kind in the world.

Towers like this revolutionized the making of musket and shotgun balls, based on the principle that molten lead will form perfectly round droplets while falling from up high. Firewood and lead were taken to the top of the tower, where a furnace was fired to melt the lead. Poured through perforations, the lead would spin into balls that hardened as they fell into pans of water on the ground. The shot was then screened, polished, sorted and packed.

Sparks Shot Tower was built to fill a need for lead shot created by the 1807 Embargo Act, which cut off the supply of foreign goods. Plumbers Thomas Sparks, John Cousland and John Bishop raised the 142-foot tall structure to turn out shot for sport purposes. During the war of 1812, they began to supply munitions for the U.S. military, at the request of the federal government. Bishop, a pacifist Quaker, sold his share of the business to Sparks as a result of the change in production to purposes of warfare. 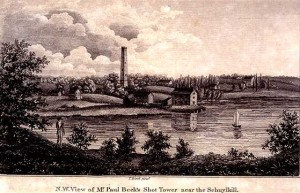 View of Mr. Paul Beck’s Shot Tower near the Schuylkill River, after a painting by Thomas Birch in The Port Folio, December 1812.

Merchant Paul Beck built a larger brick tower near 21st and Cherry Streets in late 1808. Resembling a small Washington Monument, the obelisk was thirty-four feet square at the bottom and twenty-one feet square at the top. At 166 feet high, and with walls six feet thick at the base, the tower became a city landmark. Indeed, the 1809 volume of The Philadelphia Directory claimed that Beck’s obelisk “is very ornamental to the western side of the City, contributing to break the monotonous outline of private buildings extending near three miles in length, too sparingly relieved by the solitary elevation of a single steeple…” This was when there were only a few buildings, mostly foundries and worker houses, in what is now the west half of Center City. The top of the facility offered fine views of Philadelphia and the surrounding countryside.

Tons of ammunition were produced at both of Philadelphia’s shot towers during the War of 1812. (It was said that they could provide enough ammo for all of America, plus Asia.) In 1815, to celebrate the end of the War of 1812, Beck’s obelisk was lit up like a pillar of fire, the top crowned with a hundred and sixty lamps. But by 1828, Beck closed his factory. Demand for shot had fallen to only a fraction of its 5-ton daily capacity and increased competition from other plants across the country hurt sales. 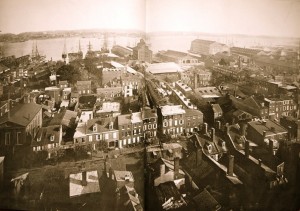 The Sparks Tower, however, soldiered on. It produced shot during the Civil War, running at full capacity. Additional buildings on the site turned out conical bullets in later years. Four generations of the Sparks family kept the place running into the early 1900s. The city purchased the site in 1913 and turned the surrounding ground into a playground to serve the surrounding Southwark neighborhood. For reasons that are unclear, the city removed about ten feet off the height of the tower.

For half a century, Shot Tower acted as a landmark for ships coming up the Delaware River for many years. It remains an excellent example of Philadelphia’s reputation for superb brickwork. Let’s hope that the helicopter pilots of Sterling Helicopter, flying to and from the heliport at Pier 36 South, continue to avoid it.