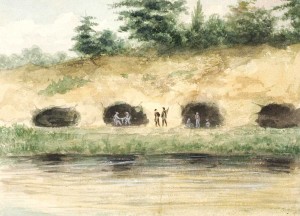 The 1680s caves along the Delaware River, as imagined by an unidentified painter. It is hardly likely that the caves were so uniform in size and so regularly spaced apart. The Library Company of Philadelphia.

Striving to endure their first, perhaps bitter taste of the New World, pioneering Quakers awaiting the arrival of William Penn lived in caves dug into the muddy west bank of the Delaware River. Early settlers wintered in these caves in 1681; about one-third of Philadelphia’s population was living underground the following year.

After Penn’s arrival in October, 1682, the caves continued to provide shelter while the settlers built homes close by or farther inland. In some cases, they may have been trying to stake a claim to an advantageous spot on the riverbank at which they hoped to build a house. As John Watson tells it in his Annals of Philadelphia and Pennsylvania:

Most Philadelphians have had some vague conceptions of the caves and cabins in which the primitive settlers made their temporary residence. The caves were generally formed by digging into the ground, near the verge of the river-front bank, about three feet in depth; thus, making half their chamber under ground, and the remaining half above ground was formed of sods of earth, or earth and brush combined. The roofs were formed of layers of limbs, or split pieces of trees, over-laid with sod or bark, river rushes, &c. The chimneys were of stones and river pebbles, mortared together with clay and grass, or river reeds.

The Lenape had long used such hollows by the river for temporary winter shelter. They told the Quakers that the holes had been created by muskrats and were then enlarged for human use. 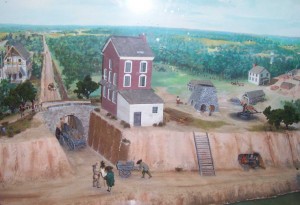 This is a photograph of a diorama at the Arch Street Meeting House at Fourth and Arch Streets. Shown is the arch carrying Front Street over Mulberry (later Arch) Street and an embankment cave.

Settlers constructed some of the caves by burrowing horizontally into the high bank of the Delaware. Other caves were made by digging down three or four feet deep atop the bank and then building a wall of earth a yard high around the excavation, thus forming a chamber half above and half below ground. The roofs were made of layers of limbs or logs covered with sod or bark and thatched with straw or river rushes. Most of these hollows had chimneys consisting of stones fixed with mortar.

The settlers often operated unlicensed taverns and other businesses in their embankment chambers. These places were the scene of illicit activity of all kinds. Gambling dens and brothels flourished. When families vacated the burrows for better housing, new families—or gamblers or prostitutes—usually moved in. Watson continues:

In 1685, the Grand Jury present Joseph Knight, for suffering drunkenness and evil orders in his cave; and several drinking houses to debauch persons are also presented. They also present all the empty caves that do stand in the Front street, “which is to be 60 feet wide,” wherefore, the court orders that they forthwith “be pulled down,” by the constables, and “demolished.”

How did William Penn feel about these caves? The Minutes of the Board of Property of the Province of Pennsylvania (1893) disclose that he issued a “Proclamation Concerning the Caves of Philadelphia” in 1686 while he was in England:

Whereas I did at first, in regard of the infancy of things and specially out of tenderness to the poorer sort, permit divers Caves to be made in the Bank of Philadelphia fronting Delaware River, for a present accommodation, and perceiving that they are commonly disposed of from one to another as a kind of Property, and taking farther notice of the great Detriment that is like to insue to the [Front] Street by the continuation of them, as well as the Disorders that their great Secresy hath given occasion to loose People to commit in them, I do hereby desire and strictly order and warne all the Inhabitants of the said Caves to depart the same within two Months after the Publication hereof.

Ultimately, the forbidden grottoes emptied. Some were filled in, while others became part of the basements of houses and stores that were built between Front and Water Streets, right on top of the caves. Yet others were converted into arched vaults under the east pavement of Front Street and then connected to newly dug basements. 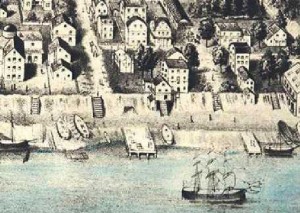 Detail from a 1875 lithograph, “Philadelphia in 1702,” by Smith Cremens & Company. This conjectural sketch shows the bank of the Delaware River–and a cave on the embankment.

The buildings on Front between Vine and Callowhill represent the last riverbank houses of Philadelphia.
This part of Front Street corresponds to the last unbroken segment of the Delaware River shoreline since William Penn’s time. It’s a remnant of Philadelphia’s waterfront that has not been devastated by the forces of commerce, industry and transportation. While the actual structures may have changed, the historic property lines (generally denoted by party walls) in many cases remain unchanged and likely go back to the first decade of the 18th century. And their basements–some under Front Street’s east sidewalk–may date back to the riverbank caves dug out by courageous Quakers in the 1680s.

It’s fortunate that a group of urban pioneers came to the block in the 1970s and resuscitated what had been a row of derelict storefronts and warehouses. Today’s residents use these chambers as storage closets, wine cellars and exercise rooms. In doing so, they preserved what are maybe the oldest man-made (or muskrat-made?) pieces of Philadelphia.