Time To Take Back the Tea Party 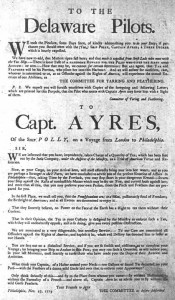 Broadside issued November 27, 1773, by the self-constituted “Committee for Tarring and Feathering.”

Perhaps on this, the 238th anniversary of the Boston Tea Party, Boston tourism officials should send us a note of thanks. (Or perhaps not, if they’re weary of contemporary misuses of history.) Philadelphia patriots organized first to rebuff Britain for imposing a tea tax, and it was mass (peaceful) protest here that proved the power of American unity.

In the 1750s, Americans began grumbling about taxation without colonial representation in Parliament. The tax on tea was particularly infuriating, so they boycotted English tea for several years, during which time merchants in several colonial cities resorted to smuggling tea from Holland. Philadelphia merchants were well-known as the most active smugglers of Dutch tea.

The boycott forced the East India Company to appeal for financial relief from the British government and the Tea Act was passed on May 10, 1773. This Act of Parliament allowed the East India Company to sell tea to the colonies directly and without “payment of any customs or duties whatsoever” in England, instead paying the much lower American duty. The resulting tax break allowed East India to sell tea for half the old price and cheaper than the price of tea in Great Britain, enabling the firm to undercut prices offered by colonial merchants and smugglers.

The Tea Act infuriated colonials precisely because it was a bare-knuckle attempt to divide Americans. The British would deploy cheap tea, said Benjamin Franklin, to “overcome all the patriotism of an American.” All this while refusing to repeal the tea tax of the Revenue Act of 1767.

Word was received in North America by September, 1773 that East India Company tea shipments were on their way. Philadelphians held a town meeting organized by Dr. Benjamin Rush, Colonel William Bradford, Thomas Mifflin, Dr. Thomas Cadwalader, and other local leaders and members of the Philadelphia Sons of Liberty on October 16 at the Statehouse (Independence Hall). They adopted eight resolutions, one of which stated: “That the duty imposed by Parliament upon tea landed in America is a tax on the Americans, or levying contributions on them without their consent.” A more important one read:

That the resolution lately entered into by the East India Company, to send out their tea to America subject to the payment of duties on its being landed here, is an open attempt to enforce the ministerial plan, and a violent attack upon the liberties of America.

Printed in the Pennsylvania Gazette, these declarations comprised the first public protest against the importation of taxed tea from England. 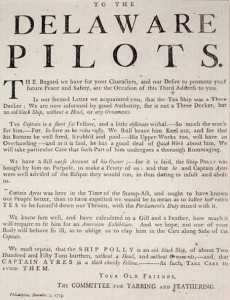 In Boston three weeks later, a town meeting at Faneuil Hall declared “That the sense of this town cannot be better expressed than in the words of certain judicious resolves, lately entered into by our worthy brethren, the citizens of Philadelphia.” Indeed, Bostonians adopted the same resolutions that Philadelphians had promulgated earlier. The Boston Tea Party followed just a few weeks later, on December 16, 1773.

On December 25, the British tea ship Polly sailed up the Delaware River and reached Chester, Pennsylvania. Commanded by one Captain Ayres, the ship carried 697 chests of tea consigned to the Philadelphia Quaker firm of James & Drinker. Several Philadelphia gentlemen proceeded to intercept the Polly and escorted Ayres to the city.

Two days later, there was a mass meeting of 8,000 Philadelphians–the largest crowd ever to gather in the American colonies–in the Statehouse garden to address the situation. A number of resolutions were adopted, the first one being “that the tea… shall not be landed.” It was further determined that the tea should be refused and that the vessel should make its way down the Delaware River and out of the Delaware Bay as soon as possible.

Captain Ayres was probably influenced by a broadside issued by the self-constituted “Committee for Tarring and Feathering” that plainly warned him of his fate should he attempt to unload his ship’s cargo. The handbill read, in part:

You are sent out on a diabolical Service; and if you are so foolish and obstinate as to complete your Voyage, by bringing your Ship to Anchor in this Port, you may run such a Gauntlet as will induce you, in your last Moments, most heartily to curse those who have made you the Dupe of their Avarice and Ambition.

What think you, Captain, of a Halter around your Neck—ten Gallons of liquid Tar decanted on your Pate—with the Feathers of a dozen wild Geese laid over that to enliven your Appearance?

Only think seriously of this—and fly to the Place from whence you came—fly without Hesitation—without the Formality of a Protest—and above all, Captain Ayres, let us advise you to fly without the wild Geese Feathers. 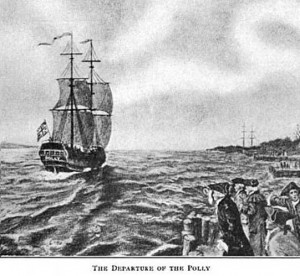 The flyer also warned river pilots that they would receive the same treatment if they tried to bring in the Polly. Consignees of the tea would also suffer dire consequences if they accepted shipment. Captain Ayres was ushered to the Arch Street Wharf and from there returned to his ship. He then refitted the Polly with food and water and sailed it back to Britain, still laden with its cargo of tea.

Perhaps due to the Quaker influence in Philadelphia, the “Philadelphia Tea Party” was relatively nonviolent and did not cause loss to any innocent merchants, since no tea was destroyed. In fact, local merchants may have even helped Captain Ayres with his expenses in returning to England.

Restrained as it was compared to Boston’s, the Philadelphia Tea Party was one of the incidents that led to the calling of the Continental Congress at Carpenters’ Hall in Philadelphia the following September. Furthermore, in 1809, Dr. Benjamin Rush wrote to John Adams:

I once heard you say [that] the active business of the American Revolution began in Philadelphia in the act of her citizens in sending back the tea ship, and that Massachusetts would have received her portion of the tea had not our example encouraged her to expect union and support in destroying it… The flame kindled on that day [October 16, 1773] soon extended to Boston and gradually spread throughout the whole continent. It was the first throe of that convulsion which delivered Great Britain of the United States.