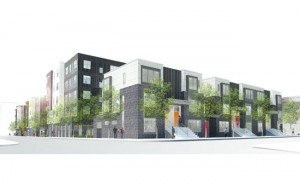 The Asociación de Puertorriqueños en Marcha (APM) has partnered with the Jonathan Rose Companies, of New York, and Wallace, Roberts, and Todd to develop Paseo Verde. Meaning “green way” in Spanish, Paseo Verde is to be a major new mixed-use development at 9th and Berks, in Lower North Philadelphia. The property was acquired by the development partnership last week. Groundbreaking is to be early next year.

Both affordable housing and design advocates should be justifiably thrilled. APM has been one of the most prolific, and successful, affordable-housing developers in the city for some time now. They recently opened the Sheridan Street Houses, an innovative project by Interface Studio Architects. (Read more on APM, on PlanPhilly, HERE.) 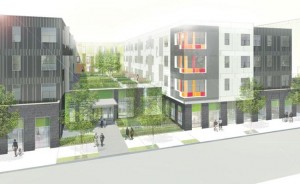 The Jonathan Rose Company, principal in Paseo Verde, was also principal in the Bronx’s Via Verde, which opened in September. That project, designed by Dattner Architects and London’s Grimshaw, has set a new standard for green, high-density, urban affordable housing. Plans for Paseo Verde show that the project principals have learned all the right lessons: first and foremost, get community input; second, identify and partner with anchor neighborhood institutions; third, partner with local developers who have strong track records of successful community improvement; and forth, use bold, striking architecture, and make a commitment to green design. 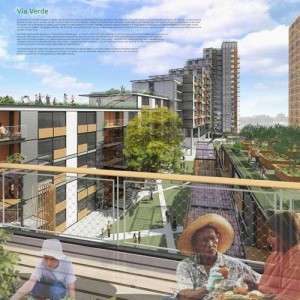 Jonathan Rose was a principal in this development, South Bronx’s Via Verde. Credit: Next American City

And in fact, Paseo Verde has a leg up on Via Verde; unlike the latter, it is transit-oriented. Where Via Verde is a good ten-minute walk to the nearest subway stop, Paseo Verde is right on top of the Regional Rail core network. Healthy transportation is as important as healthy living–and one of Via Verde’s few immediate drawbacks is its distance from rail transit.

Michael Kimmelman, in his first review as the New York Times‘ architecture critic, wrote effusively of the ambition and execution of Via Verde. I’ll leave on a similar note: I like what is going on at Paseo Verde, and I want to get back as it rises, potentially over the course of next year.