Origin Of The 99 Percent? 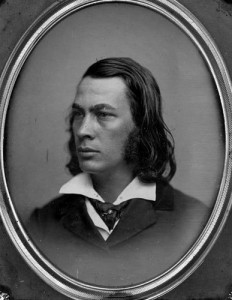 We’re feeling revolutionary today, at the Daily. A little later, you can learn how Philadelphia radicals paved the way for the Boston Tea Party, and then finished the business by sending the crown’s representatives–and their tea–packing. Now, tracing the origin of the Occupy movement’s “We Are The 99%” not to Karl Marx, who called the high tiers of capitalism a “Vatican,” and not to Joseph Stiglitz, whose May Vanity Fair article is credited with inspiring the meme.

Rather, we trace the 99 to the wonderfully Gothic George Lippard, journalist and best-selling author, and founder, in 1849, of the worker alliance Brotherhood of the Union. (Marx and Engels’ Communist Manifesto was published in 1848, but didn’t receive an English translation until 1850. The American edition came out even later.) Quite a bit more romantic than Marx and Engels (he decried class warfare), Lippard, who lived in Kensington and worked at Third and Chestnut, hoped his nascent organization would:

give to every man the fruits of his labor–will secure to every worker a homestead–will protect the men who work against those usurpers of capital who degrade labor in factories and swindle it in Banks–will by means of peaceful combination so reform public opinion that legislators will no longer dare to make special laws, and bestow privileges upon one man at the expense of ninety-nine of his brothers and sisters.