We recently reported that one of the Vine Street Expressway’s “cutouts” in Logan Square–the one closest to the Parkway–it going to be covered for an extension of Shakespeare Park. The article was called “stitching squares.”

This will be a start–but that’s all it will be: a start.

The architect and city planner Daniel Burnham is credited with one of the classic lines of city planning: “Make no small plans.” Burnham’s approach to the discipline, combined with the dominant influence of Paris’ Ecole des Beaux-Arts, led to one of America’s first major homegrown urban traditions: the City Beautiful. It was in this City Beautiful spirit that the Frenchman Jacques Gréber designed the Ben Franklin (née Fairmount) Parkway.

It was to be many things. A boulevard linking Fairmount Park into the heart of Center City. Philadelphia’s core cultural center. Even its Main Street. It was heralded–and has always been promised since–in this twofold manner: linking the park to the city and being Philadelphia’s Ave. des Champs-Elysées–that is to say–bringing the city to the park. 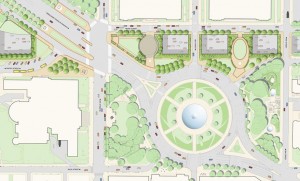 Throughout its history, the Parkway has decidedly swung to the former rather than the latter. Space along it–primarily along its upper half–is largely underutilized, deep lawns and groves, punctuated by ballfields that could be replaced a hundred times over within the confines of the city’s largest park. As the postwar highway mentality settled in, its bucolic setting helped hide a traffic sewer: long six lanes wide south of Logan Circle, and ten north of it.

Designed for promenading, it has become no place for a promenade. We mostly avoid it.

Compromise to the automobile has, from the beginning, created the half-baked half-failure that is the Parkway. But the circumstances of its creation and maintenance ensure that only by making no small plans will we fix it. For it to fulfill its intended role, the link between park and city, we need to think big. 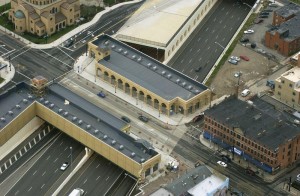 A successful freeway cap in Columbus, OH. What if Logan Square was bookended by these? Chicago Tribune

Grand ambitions do not, however, contravene small actions; in fact, if the Delaware Avenue master plan has taught us anything, it’s that small gestures–such as the Race Street Pier–are necessary to achieve grand plans. Small gestures, in aggregate, build up demand for accomplishing the grander gestures.

Small actions, like bringing al fresco dining to Moore’s café and the new park being built in Sister Cities Plaza, begin to build demand for greater, and better, park use–for grand gestures such as pedestrianizing the lower half of the Parkway, or bringing urban uses to what is currently underappreciated and underutilized parkland.

Luckily, Paul Levy, who leads the Center City District, seem acutely aware of the Parkway’s flawed history. “We’ve never finished,” he says, “the Parkway was only half done.” Indeed, when the District started planning for Parkway improvements in 1999, they began with Gréber’s drawings, and found that so much had gone unbuilt. About $1 billion in investment later, the Parkway is much improved. But it still underperforms.

In the coming weeks, we’ll look at both small actions and broad gestures, and think about what the possible Parkway is: the grandest and most urbane boulevard in the city.