Jefferson’s Monticello On The Schuylkill

A mid-to-late 19th century watercolor by David Johnson Kennedy, based on an original etching by John Andrews, later the Assistant Cashier of the First US Bank. Courtesy of the Historical Society of Pennsylvania

Nature intended me for the tranquil pursuits of science, by rendering them my supreme delight. But the enormities of the times in which I have lived, have forced me to take a part in resisting them, and to commit myself on the boisterous ocean of political passion. 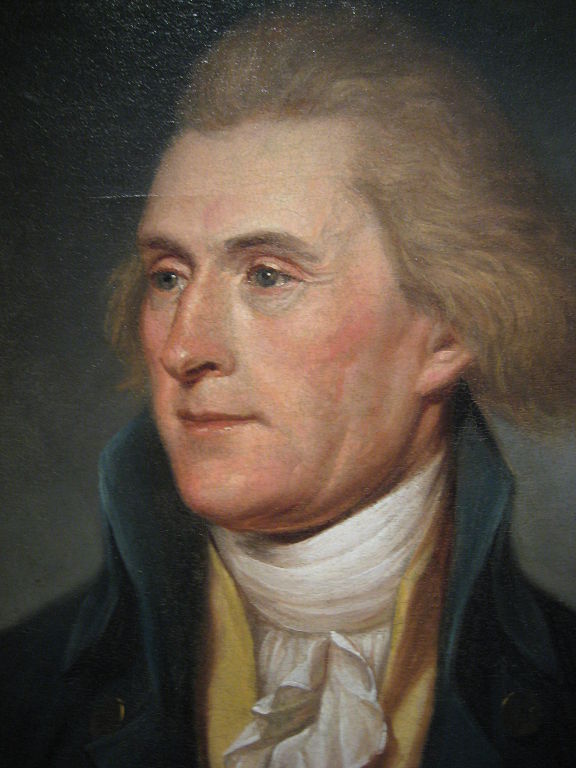 For only five months in the spring and summer of 1793, Thomas Jefferson rented a relatively modest estate on the eastern banks of the Schuylkill, some “3, or 400 yds. below Grey’s ferry.” It was a transient imitation of his beloved Monticello, yet we are inclined to see something more integrated and politically impactful here than that idyllic, overly removed, and more politically passive aspect of a man who Christopher Hitchens has deemed the “author of America.”

Thomas Jefferson’s distaste for urbanity is legendary, having once confided in James Madison his fear that “the mobs of great cities add just so much to support of pure government as sores do to the strength of the human body.” Renting a house at 274 High (now the 700 block of Market) Street since 1791, he found himself perhaps too close to the rotting stench spewing forth from the market stalls down the street. 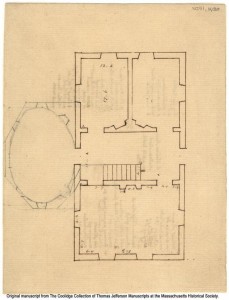 Jefferson’s outline of the house, courtesy of the Massachusetts Historical Society

The year 1793, as Gordon Wood extrapolates from congressional voting patterns, stands out as the clear emergence of American political partisanship—and in its most vitriolic form to date. By March, Jefferson, besieged and defamed by the “monarchical” Hamilton and Adams, found himself dreaming of permanently retiring to Monticello more so than ever. Yet he was too fearful of giving his Federalist enemies the opportunity to accuse his cowardice in forfeiting his position. On the 13th, confident enough to maintain both the semblance of escape and his own political relevance, Jefferson inquired into renting the small riverside estate of Quaker merchant Moses Cox, then living on South 2nd Street. By April 9, he had moved in, accompanied by a carefully selected set of furnishings.

The compromise to which Jefferson aspired is a tale not too dissimilar to the post-war American experience with disjointed sprawl. As Philadelphia historian Steve Conn muses, contemporary “suburbanites … treat [Philadelphia] as their playground, using it for everything from art and high culture to drugs and prostitutes, while simultaneously, often angrily, disavowing the notion that they share any responsibilities for the city’s considerable problems.”

The Grays Ferry of the end of the 18th century was still considered one of the most splendid patches of country in North America. After all, it was near this bend of the Schuylkill where John Bartram—reckoned “the greatest natural botanist in the world” by taxonomist Carolus Linnaeus—chose to keep his private gardens in 1728. Jefferson would walk the curated grounds of Bartram’s Garden on occasion, as well as seeking out the practical and theoretical expertise of George Logan, even drafting that summer a planting scheme for Monticello for the Senator-farmer to approve.

Having learned “the full value of trees,” Jefferson wrote to his eldest daughter Martha:

My house is entirely embosomed in high plane trees, with good grass below, and under them I breakfast, dine, write, read and receive my company. What would I not give that the trees planted nearest round the house at Monticello were full grown—

We can trust the regimented Jefferson on having maintained such a routine on the house’s grounds, for it was a summer of drought. And so, we are assured an extraordinary scene: the first Secretary of State, studying at a wooden table, shaded by a grove of trees, overlooking the banks of the Schuylkill. It was from that book-ridden, pastoral table that Jefferson chided the brilliant yet impetuous French Ambassador Citizen Genêt, lamented “so deep a tragedy” as the Haitian slave rebellion, and grudgingly espoused neutrality in order to shield his still young republic. 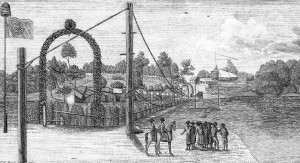 On August 7, President Washington visited this riverside study. With the Grays Ferry pontoon bridge spanning the river, it was a prospect with which he was well acquainted, the scene of his inaugural procession into the capital city four springs past, a Roman Triumph prefaced not by conquest, but the recent Constitutional undertaking—and Jefferson’s manifesto of independence. Washington pleaded with his Secretary to postpone his resignation until the last of the year, to which Jefferson reluctantly agreed, unaware that within weeks, an epidemic would bring him to Monticello sooner than he could imagine.

As yellow fever was literally decimating the national capital only three miles away, Jefferson struggled to maintain his routine as an anti-urban man of leisure. On September 6, he sat beneath his trees, penning a letter to David Rittenhouse, asking to borrow the scientist’s camera obscura so that his young daughter could better study the flora and fauna of the Lower Schuylkill. Though such inaction would certainly prove a disaster to a public official within today’s media saturated atmosphere, it was keeping with Jefferson’s insularities. When, twenty years prior, his friend and brother-in-law Dabney Carr died of a similar fever at Monticello, Jefferson “dulled his grief,” reflects Geoffrey Ward, “by calculating the length of time it would take for his slaves to prepare the graveyard for [Carr’s] coffin.”

The abstemious Dr. Benjamin Rush even blamed Jefferson’s bucolic lifestyle for fellow Philadelphia physician James Hutchinson’s death from the fever: too much wine and too much open air.

And with the federal government routed, Jefferson saw no reason to maintain the compromise between private retreat and political service; nothing stood between him and flight to Monticello. He ordered a slave to pack his things, and fled on September 17—Constitution Day.

Jefferson spent the next four weeks collecting himself in Virginia, now finding his grounds lacking. After an abbreviated return to the wandering capital in a healthier Germantown, he began what he then thought would be his final retirement. During 1794, Jefferson began the remodeling of Monticello; while the architecture was inspired in part by his time in Paris, some notion of the Schuylkill’s banks was discernible in its landscaping and tillage. He had a few more seeds, farming manuals, and know-how from his time in Grays Ferry.

This was not to last however; looking out from the political sidelines of central Virginia only brought increasing anxiety to Jefferson, nervous that his nation was slipping further into the depths of a vile aristocracy. Within three years, he was back in Philadelphia, serving as Vice-President to Adams. For most of that term, Jefferson resigned himself to stay at the center of the metropolis, at John Francis’ hotel, approximately at the Bourse’s eastern end on South 4th Street. Famed Indian-fighter General Josiah Harmar had already snatched up the house on the Schuylkill sometime in 1794. His family held on to the property well into the next century.

But Grays Ferry, as we well know, is simply not the Eden it was in 1793. The location of Jefferson’s estate now houses the maintenance garages for Philadelphia Trolley Works, whose fleet initiates a reverse migration to Old City everyday, in search of the genesis of American history. (Editor’s note: phase 2 of the Schuylkill Banks, nearing completion, brings the trail right up to Jefferson’s Gray’s Ferry estate. The trail is visible in the photo below.) Yet as mechanics replace brakes and check the cars’ oil inside, they surely fail to realize the truly hidden history outside, among the cracking asphalt, careless litter, and chain link fences. Here was the Jeffersonian synthesis, a place where one could reasonably expect to see the man spending portions of any one given day chronicling the veins of a leaf while actively attempting to cajole an international liberal revolution. 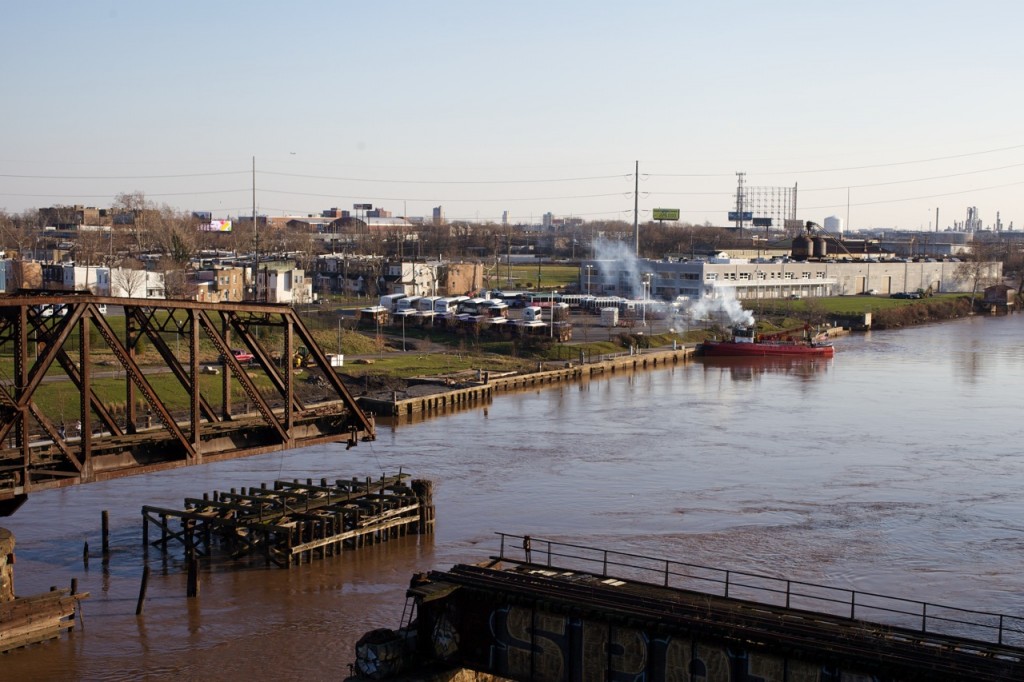 The garage behind the red Fire Department boat is located on the grounds of the former Jefferson estate | Photo: Peter Woodall